WNSH is an FM radio station broadcasting at 94.7 MHz. The station is licensed to Newark, NJ and is part of the New York, NY radio market. The station broadcasts Classic Hip Hop programming and goes by the name "94.7 The Block" on the air with the slogan "New York's #1 for Throwbacks". WNSH is owned by Audacy.

History:
In January 2013 Cumulus Media took control of the station after closing on the $40 million dollar purchase of the station from Family Radio. Before launching formats the station air a simulcast of WPLJ and then began Country on January 21, 2013. 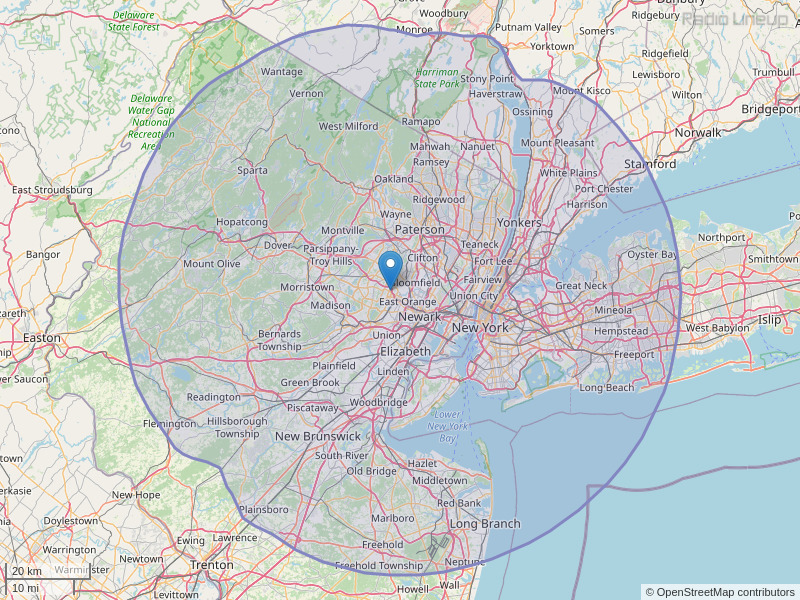 May 21 will come and the real Judgment Day will be for Family Radio. Harold Camping will be proved to be a false teacher. All of you at Family Radio should be ashamed of yourselves for blindly following Harold Camping and not knowing God's Word. You should have separated yourselves from him like those who got away from Cora when he opposed Moses. Just think how many people have sold their possessions and sent the money to Family Radio. Meanwhile yourselves have made financial plans that go well beyond May 21.You know full well that you haven't drained your accounts in order to get your "good news" to the Lost World. God is going to judge you for this one day, or did you forget how angry Jesus got at those who devoured widows houses. Every one of you that know Harold Camping is wrong and don't want to say anything for fear of loosing your position are guilty. Remember how God blessed Joseph He would have blessed you also for not denying him. Those who seek to save their lives ( jobs, honor, position, etc...) will loose them. Instead of being honored as those who were willing to loose all to follow Jesus, you will be shamed as cowards who looked on as widows were robbed and the blind were led into the ditch.
By: Ben on April 26, 2011

hey Ben, i agree with your well written message. i actually want to find the address of Family radio in Newark, NJ so I can make a demonstration on May 22nd. Harold Camping needs to step down as president and allow a real man of God to lead the stations. That date will prove him to be false once again!
By: Carlos on May 12, 2011

There were so many people that have spent their life savings spreading the interpreted words of the bible of Harold Camping. It would be nice if he would at least admit that he was wrong .. again.. and apologize. Not admitting one's mistake that affected so many people demonstrates his over abundance of vanity and lack of humanity.
By: Glen on May 27, 2011

on 11/23/12 at 10:43 a.m. I heard a song played on your station. I do not know the name of the artist or the title of the song, but one of the verses is "what does it profit a man to lose his own soul and gain the world. I would love to know the artist's name and the correct title of this song so that I can purchase it. I listen on 94.7 in New Jersey. I would appreciate any information
By: Camille Rajkumar on November 23, 2012

Hope they play some "Real Country" and not just the "Pop Wannabes"
By: Ray Farrell on January 22, 2013

It's great to have country music back in the New York area after almost 17 years without it. I hope they plan on playing older country artists such as Johnny Cash, Patsy Cline, Eddie Arnold and the like. Best of luck to them! Chris Hasselkus, NJ
By: Chris Hasselkus on January 26, 2013

I love NASH country already. Love that their playlist include artist like Toby Keith. Also love that it' is not the same few songs morning, noon and night. Please continue to mix it up. It's awesome. Don't be afraid to play some oldies with your new, like Willie, Waylon, George, and Conway. Looking forward to your new live DJ's. Welcome to New Jersey. Waited a long time for you.
By: Carmen Santoro on February 22, 2013

Trying to find a song with the lyrics "There goes my everything there goes my life" I think Kenny Chesney sings it. IIt played on Thursday night about 7:30/8:00pm
By: Dave Donovan on October 11, 2013

I noticed that you play Sweet Annie by the Zac Brown Band every couple of hours....I like the song but once or twice a day is enough.
By: lisa on January 21, 2014

I am listening from california and the music doesnt match ehat is being said.is there any other station in new york that is nash 94.7. I am trying to turn into terri clarks morning show thanks nancy D
By: Nancy Dacumos on January 26, 2014

I'd like to send a country song to you. You have no info if you accept submissions or not; probably not but I'm still trying. Thanks. Twenty of my songs are on itunes, etc.
By: Sylvia Semel on July 8, 2014