Favorites of Yesterday and Today

KABX is an FM radio station broadcasting at 97.5 MHz. The station is licensed to Merced, CA and is part of that radio market. The station broadcasts Adult Contemporary music programming and goes by the name "K 97.5" on the air with the slogan "Favorites of Yesterday and Today". KABX is owned by Mapleton Communications. 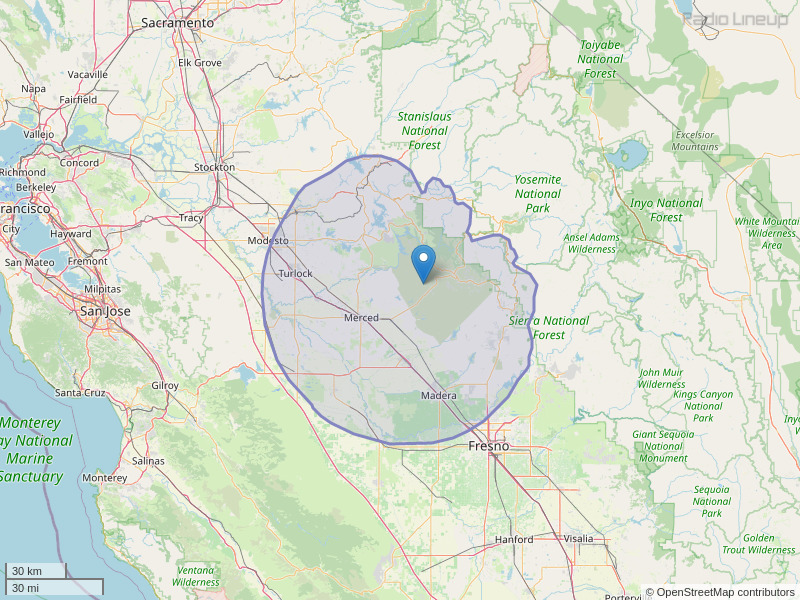 What are you thinking. You've got the only true oldies station in the valley and have been here for years. Now it is gone and so are the oldies. Ludicrous!! Who made this decision? You had it right and now it is so wrong. Thanks for nothing!
By: Larry Henricksen on August 30, 2011

I agree with Larry. This is a sad week here in our valley, losing our beloved "oldies" on the radio.That wonderful music and tunes with real melodies, we grew up hearing ,gone for good ? I certainly hope not.I for one will keep on scanning my dial,until I hear those marvelous tunes return. When will a radio station discover that we the public want to hear all the hits and popular music going all the way back to the 1930's !.....when recordings first started taking place. Focusing in on one or two decades is just dumb. Why limit yourself.
By: Carlos Gonzalez on August 31, 2011

The new format is lame, there are already radio stations playing this stuff, 97.5 was my favorite for so long, now they just threw listerners like me under the bus. Terrible decision, will have to listen to CD's only now while driving/working. Will miss the wolfman!
By: Johnny W on September 1, 2011

yah it sucks they took the oldies station out. first it was 92.9 now kabx. The new station is not new because you can listen to that on many channels. Who ever made this decision made a wrong one. its a shame. nothing will ever compare to oldies 97.5. you have to play a cd now or go to the am station to listen to oldies. it shouldnt be replaced for the younger generation i am 28 and oldies is oldies i love oldies and nothing can or will ever replace that kind of music. It is a shame they put kabx off the air. its a terrible decision and the station sucks now will not be listening to it at all.
By: Miguel on September 1, 2011

I tried to find your website but all links were broken. just wanted to let you know i dropped you from all my presets cars and home. worst format change i have seen in years. hope you go broke for the switch. cant wait to see your station up for auction and all you out on your ears.
By: John on September 8, 2011

What gave you the idea that no one listened to the oldies you were playing? There is no other stattion that plays as good a mix as you had. When will you switch back? If you don't, you're crazy.
By: Jacquie on September 9, 2011

I'm 38 and only listen to oldies. I USED to have a station. Now I have an iPod. I couldn't agree with every one else any more. Worst marketing decision ever! The new format sucks!
By: George on September 30, 2011

I'm really disappointedt that your radio station has removed Baby It's Cold Outside from the playlist. That song doesn't hurt anybody, it's nothing like the words used by society to classify women everyday. What really upsets me though is, that one was removed since it's sang by a male, but, Santa Baby has stayed which is sang by a female. So is this sexist towards men since she's calling Santa Claus baby? Especially since it's sang in a erotic voice which puts women in that "stop looking at us like a piece of meat" category. Or even worse, since she's asking for Santa to give her all kinds of gifts, does it mean she can't fend for herself or is she a gold digger? See, neither of these songs really hurt my feelings personally, but hey, fair is fair. If one goes so must the other right. But, I'll be the bigger "human," since I can't say man or you won't take this post seriously, lets leave Santa Baby and I hope you have the courage to run YOUR business and not let one group that will listen to your music again anyway, to bring back a nice beautiful song that is perfect for the season.
By: mike mendoza on December 9, 2018