KCGF is a low-power FM radio station broadcasting at 100.5 MHz. The station is licensed to San Angelo, TX and is part of that radio market. 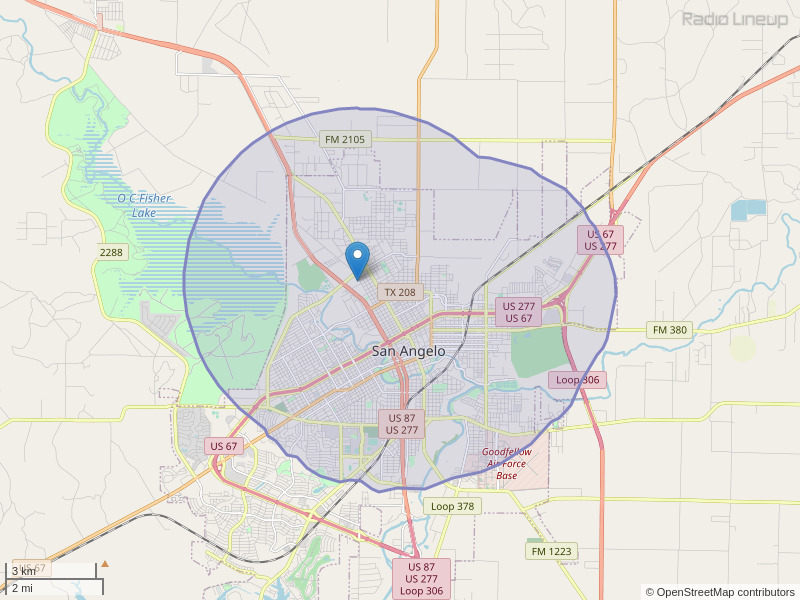 This station is horrible. Who picks the music? r
By: Anonymous on January 26, 2016

Recently found this station here in San Angelo. Tried it out for a while. I can't figure out where they find their music. It's mostly bunch of crap I have never heard of. What ever company owns this station needs to get some consultants to show them what people want to listen to. Total waste.
By: Josh82 on February 26, 2016

Nice station for rhythm and blues with music from classic singers and others (Patty La Belle, Natalie Cole, Gladys Night, Miki Howard, Luther Vandross, etc. I don't know what the other person was talking about. This station is my escape from ads, chatter, bad music and helps me relax. If you are into rap but like rhythm and blues this is the place.
By: KE on March 23, 2016

The signal for this station is terribly weak and is filled with static. I did sit at a park for a while and tried to listen for a bit. But the eclectic hodgepodge of tunes that was coming forth just turned me off. I couldn't listen long before I decided I had rather stick needles in my eyes than endure much more of this garbage.
By: Licrish73 on April 13, 2016

If you are into older r&b from the 80s and 90s this station is it Not to mention its in stereo now. This station is all I need especially in lonely west tx. If y'all want that horrible non music stuff these kids listen to today then sorry this station is for grown folks
By: Jackson on January 31, 2018

Hey dj wake up plz. I have heard repeats back to back. Not to mention yestorday a song struggled for an hr ( i kid you not) to play. It skipped and repeated and they didnt try to pull it and play another song. Today a segment was stuck and instead of pulling after the woman repeated the same line 20+ times it started at 4:30 she is still saying the same sentence and its now 5:08. I like the oldies that do manage to work but I have heard better djing by a 10year old with a Cd player.
By: Pounce on March 19, 2019

I am trying to find out who is the artist or artists performing a line dance to music by Slave called Slide that you play.
By: Byron Ephran on September 21, 2020

Made it through the Winterstorm of 2021 listening to this station. When most other stations went down due to the power outages, yours was one of the few that stayed on. I had no electricity for 42 hrs at home but I was able to enjoy your music in my vehicle or on my battery powered radio. Thanks for bringing some semblance of normality throughout my ordeal.
By: victoriguana on February 19, 2021