KXVV is an FM radio station broadcasting at 103.1 MHz. The station is licensed to Victorville, CA and is part of the Victor Valley, CA radio market. The station broadcasts Regional Mexican music programming and goes by the name "La X 103.1 (formerly 103.1 The Route)" on the air with the slogan "Mas Musica". KXVV is owned by El Dorado Broadcasters. This station broadcast a majority of its content in Spanish.

History:
Station was formerly ESPN 103.1 but flipped to classic hits in December 2011.
August 2019: Classic Hits KVFG 103.1 The Route flips to Regional Mexican Music as "La X 103.1" under new ownership. The station was sold from Entercom to El Dorado Broadcasters along with 910AM KMPS for $1 million. 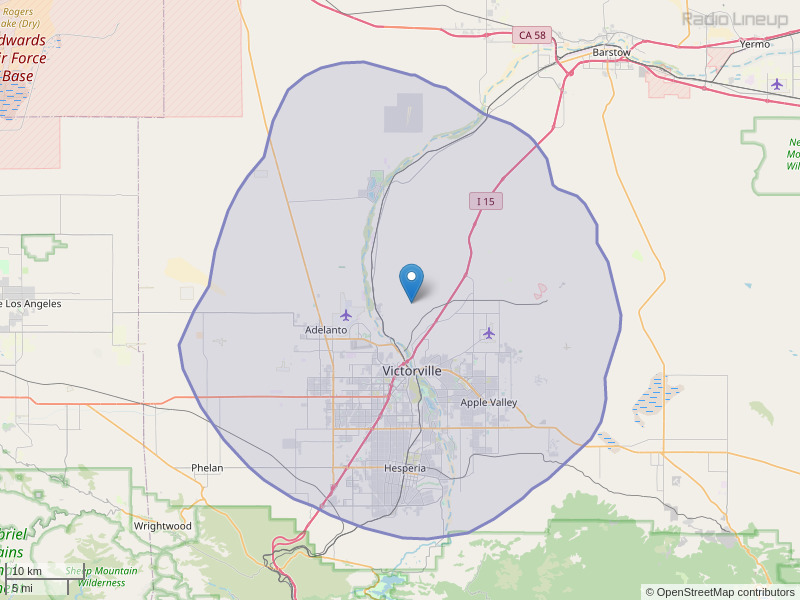 HI! I have totally enjoyed your radio station! I help take care of an elderly lady at the STerling Inn and we used to listen the the local AM910 station. So MANY seniors as well as myself were devistated to find the radio station no longer there for us to enjoy the old classics that Steverino played. Is there anyway possible to maybe designate an air time for the era of music that was played on Steverinos show? Such as FRank Sinatra, Tony Bennett, The RAt Pack, ect. Maybe during the early afternoon. The Senior Community is grasping to hold on to what they have left of their past and music is on of the only things that brings them pleasure. I hope to get a response and have some exciting ideas to offer. I actually got the Jess Ranch Cinemark Theatre to start playing Classic Movies again and it seems to be a great idea that the public loves. Thank you for your time. Sincerely Anna Basura
By: Anna Basura on January 6, 2012

So glad I happened onto 103.1 the other day. I didn't like the playlist at the time I was listening to 106.5 so scanned down and locked onto 103.1. All our radios are preset now to KVFG !!!!!! Love the daily playlists and reminisce to a better time. Songs we've not heard in years and have forgotten but love. Thank you CBS 😃
By: Bob Mack on January 25, 2012

LOVE YOUR MUSIC!!! The songs you play really take us back! By we, I mean the ladies at our school kitchen at Oak Hills High. Got you on at home and in the car now. kepp playing the "greatest hits of all time".
By: Liz Gonzales on May 10, 2012

What happened to your classic rock format? When we first happened across your station, we loved hearing classic rock artists such as Pink Floyd, Juthro Tull, Cream, Deep Purple, Queen, Moody Blues, Janis Joplin and this type of format, mixed with Beattles hits. The inclusion of some mid 1970s disco hits (ie: Blondie, BeeGees, and the YMCA guys) and a few Top 40 hits (Billy Joel and Elton John) sprinkled in to add balance. Lately, it seems that the balance has been lost and we are forced to go back to channel surfing. It seems that you are going toward the 99.9 KOLA format. If that's the case, we might as well just go back to listening to them, since they offer a stronger signal. In fact, in our quest to break the monotony, we found ourselves going back to KOLA this weekend. We do a lot of entertaining at our home and, in the past, would program our own music. This summer we had people from 21 to 70 years old at our home and played your station, instead of our own programing. You earned yourself many new listeners through our get-togethers, but our friends are noticing the same shift that we are. I am hoping that you find this feedback helpful, as the High Desert needs a different format than other stations.
By: Concerned Listener on October 8, 2012

I like to say I hear you all the time I'm glad we have a great station that play MY GENERATIONS music. I would like to hear some music from "The Band"called "The weight" I went to see them in the Last Waltz's in 78" hope you have something of there's. Best radio station The Route 103.F.M
By: Cathy on February 7, 2013

I don't understand: Are you "bruce 103" or "ruth 103"? Or what. Unbelievable. I'm serious. Neither my wifey nor I can figure out what the d.j. is saying: Could you answer via e-mail? Thanks. P.S. Love the songs! Wish they'd announce the NAMES of some of the less 'popular' hits. Signed, Paco
By: Paco N Martinez on March 28, 2013

Thank you for bring great music to our home in AppleValley !
By: Sue and Al on July 5, 2013

Just happened to find this station and I am loving it. Nice to have something that plays music I can listen to and sing along with at the office. Thanks
By: Kimberly Brown on February 20, 2014

This station rules,especially the 80's tunes. The 80's definitely take me back from when I was a little girl. I am now an adult at 33 years old. keep up the hard work, especially you Jay Fox.
By: Lacey Vermillion on July 3, 2014

I pray I have the correct station. I believe I was listening to your station 2 Saturday's ago & there was a Dr. on giving medical advice??! My aunt was with my as we were driving into Apple Valley when the Dr. gave someone information about thinning / losing hair? He mentioned an herb you can take? Please tell me this is the right station & what's the name of the Dr. on Saturday? Thank you.
By: James Taylor on November 20, 2018

can i get the dr.s name and website who is on saturday mornings
By: james on August 5, 2019

What is it with playing Mexican noise on an 70's,80's and 90's music station!????? I turned on my stereo this morning hoping to listen to some GOOD music, and Mexican circus noise is coming out! There are other radio stations that cater specifically to that genre, NO NEED to put it on the ONLY good station in the desert. Also, stop playing the same songs on a loop. I stopped listening to Kat country because it was the same 12 songs on a loop and the fact that jimmer was no longer on.
By: Dee on August 27, 2019

The website listed above takes you to 1080 the FAN, which is a sports page, not the KVFG radio website. Needs to be fixed
By: Dee on August 27, 2019

I listen to your station all the time, but this morning it was totally different. Did you change your programming in music?
By: Joey on August 27, 2019

I am extremely disappointed that this radio station is no longer available!! This was the ONLY station that played GOOD music. It played songs that actually reminded you of better times, made you feel good and that you’re able to sing along to. I turned on the radio and heard Mexican music... I was confused. I tried calling the number above and was informed the station is no longer in service and was redirected to 106.5 (which by the way is awful and is NOTHING compared to 103.1) please please please, reconsider getting rid of it! This was the only good station left in the High desert!!
By: Faith Rodriguez on August 28, 2019

Need to hear the classic rock format that I love so much! I do not like the current junk that is currently coming from your station! What the heck! Losing the station I love is depressing!
By: April on August 30, 2019

I am more that disappointed that the Classic 70/80's station is now playing "Regional Mexican Music " - there are more than enough Mexican radio stations in Southern California - there is only one other option for listening to "gringo" music in the High Desert and that is Y102 which is the WORST!! Could you not have added the regional Mexican music to another band width?????..........the radio station selections are horrible in the the High Desert - pathetic. I listen to online music while working, but I prefer to keep music on downstairs - my pets do not understand Spanish!! I am angry and frustrated - there are enough Hispanic radio stations being broadcast - WHY take the only decent radio station available in this area and replace it with Mexican music???? I guess caucasions are the true minority now.......... Pathetic move...........
By: CAROLE RUNNE-BURDICK on September 3, 2019

this is america not Mexico bring back the classic rock
By: Tim on September 12, 2019

Please help spread the news better to my Hispanic friends. STAY HOME they are acting like we don't have a problem or they just don't understand. We are all under financial strain. But when they are having get together's going about business like nothing matters. You will wonder why you have not stepped it up when one of your family members is hanging on to life or dies. Please encourage them to STAY HOME. Thanks from someone who cares enough to say something.
By: Concerned on March 25, 2020