KYWS is a low-power FM radio station broadcasting at 92.9 MHz. The station is licensed to West Sacramento, CA and is part of the Sacramento, CA radio market. 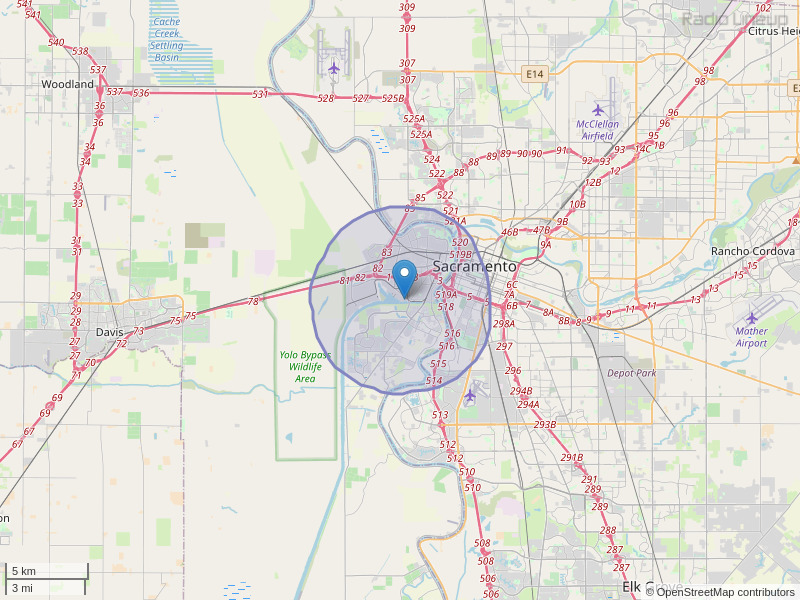 What, no ads, songs I never heard before by people I never heard before. No fiddles. Wide range of styles of music. I actually heard a trumpet. I discovered your station tonight and immediately fell in love with it. Keep up the great work you are doing. Looking forward to your website if you make one. If you don't, more power to you, radio is not internet.
By: Brian Thompson on March 22, 2018

Please identify the song titles you are playing. Interesting mix of music indeed. How do listeners volunteer to help with this station? Any chance of being an on air person? Mark J. Powell mjpowell45@comcast.net
By: Mark James Powell on April 19, 2018

Two septigenarians find your music romantically inspiring. Dancing on a Friday night. Rare to find such interesting music here in our home town. Your music is to the caliber of kzap, kvmr and kdbs Thanks!
By: Carol Klesow on April 28, 2018

Just discovered the station and love it... Great mix, keep up the creativity!!
By: Vic Bakarich on July 31, 2018

Great to hear to LP FM's on the air in Sacramento right next to each other on the dial keep up the great work.... Hopefully that horrible sounding stations on 93.1 will shut the f up with all the hate speech what's wrong with those people at iHeartRadio oh yeah bankruptcy.
By: Brad on August 22, 2018

In reference to 107.5 KBQS in Sacramento. Sky Earth Network did buy the station and they're signal. But is awaiting for the FCC's Approval on the FM Booster, but for now. we have our stations Public Notice. and for that the link is provided. | https://audiomack.com/embed/song/kaylee-lynn-stein/921-konb-2 | station link is. https://kbqs.sen1.us and click on. власть107
By: Kaylee Lynn Stein on February 22, 2019

I’m reposting this because I’ve added information about the FDA withholding an HIV vaccine. I’ve posted this information in Washington DC, Seattle and Spokane Washington, Denver, Boulder and Pueblo Colorado and Los Angeles, Sacramento, San Francisco and San Jose California as well as Portland Oregon. I also sent this information to almost all the radio stations in Portland Oregon and Seattle Washington including KISW On Wednesday May 15th, 2019 hackers locked me out of all my email accounts and prevented me from opening any new ones. I had been sending emails to Radio stations in Southern California the day before. Two days prior to that on Monday May 13th, The Family had gotten its hands on my thumb drive which contained copies of all the files I was using to inform people about the situation between The Family and I. I had backups in my email accounts but once they locked me out of my email accounts I no longer had access to these files. There were a few things I was informing the Radio stations about. One of them that Radio 1190 had a moral obligation to cover the murder of Randy Rhoads. Radio 1190 is the Colorado University Radio and the murder of Randy Rhoads was tied to an Ozzy Osbourne performance in 1982 that was held at the Colorado University Event’s Center located in Boulder, Colorado. I’d informed Radio 1190 of that situation and its connection to The Family regarding The Family’s guilt of treason and the creation and distribution of Aids around August of 2018 and they failed to report it. I was also informing them of a situation that happened in 1992 that was connected to the Wilson sisters of the band Heart that got my bandmates and bandmates of two other bands murdered. This involved the secretary of Bad Animal studio named Becky who was also murdered over the situation. Bad Animal studio is owned by the Wilson sisters. I also had information about KISW involved in a situation where The Family was trying to get me over the Canadian border in 1994 so they could lock me up outside the country to neutralize me as a result of my HIV activism that I was involved in in Seattle from 1990 to 1994. KISW is located in Seattle. One of their employees named Diana who worked in the advertising department got me Pink Floyd tickets to the concert in Toronto. She was murdered over the situation and many others as well so KISW also had a moral as well as a legal duty to cover the story. They’d been informed and failed to cover it. Now there is only one reason The Family would steal, thumb drive and close my email accounts and prevent me from opening new ones. That is that everything I’ve been saying is the truth. There is no other reason to take these actions. The information I was sending out is tied to the creation and distribution of HIV by The Family. They are trying to keep the public from finding the information I’ve been sending out because then everyone finds out they made HIV. The actions are equivalent to legal admission of the information and ultimately the courts will view it as such. What they really don’t want people finding out is the fact that the HIV pandemic was intentionally started though tainted vaccines produced by Merck whose website is at https://www.merck.com/index.html And the National Institute of Health whose website is at https://www.nih.gov The National Institute of Health is a Federal Government Program which means that this situation is evidence of the US Government’s involvement in starting the HIV pandemic. What a lot of people don’t know is that there is an HIV vaccine that has been discovered by OHSU. I found out about it around 2007 at about the time The Family intentionally infected me with Aids. The FDA has failed to approve the vaccine up till now. The Family actually has the power to stop the HIV pandemic and has failed to do so. I contact sent emails and left voice messages to the FDA a few years ago so they know this is an issue and they have still failed to do anything about it. People are dying around the world to HIV needlessly. For information on the technology used for the vaccine go to https://news.ohsu.edu/…/vaccine-technology-developed-by-ohs… There’s more information about HIV on the blog but I will say this. The United Nations was involved in administering the tainted vaccines through there organization called the World Health Organization. Their websites are at https://www.un.org/en/ https://www.who.int I contacted the White House about The Family closing my email accounts and preventing me from opening new ones on the day that it happened. President Trump hasn’t done anything to restore access to my email accounts. I’m not surprised because clearly the US Government was involved in the distribution of HIV and are still involved in the ongoing genocide happening due to the inaction of the FDA. This is something we should all be concerned about. Not only is HIV a serious health issue for society at large but is in fact an act of war committed by The Family against the entire world. No wonder The Family stole my thumb drive, closed my email accounts and won’t let me open any new ones. If you care to share your feelings with President Trump about this situation go to https://www.whitehouse.gov/contact/
By: Paul Huebel on May 18, 2019

I started listening on December 4. I have tuned in each day since and the same artist and same songs have been playing all four days!? What is happening over there? I like the artist, top notch, but not for four days straight. Lol I can come down and bring some records? Call me!
By: Shonda Honkanen on December 9, 2019

I'm hooked on the song list. I want to know the name of the band that is played constantly. It's a 3-piece with a female vocal. I heard her say her last name is...'jewel'? Who is this band? Where can I hear them live? This music haunts me daily. I wake up singing the lyrics and throughout the day walk to their beat. Help!
By: skcarter on December 21, 2019

Hey SKCARTER, the singer you are asking about is Eilen Jewell. She has a four piece band and just call themselves "Eilen Jewell". They played at the Palms in Winters a couple of months ago and unfortunately I too missed them. They're now based in Boston, Mass. and play throughout the country and internationally. Great band.
By: Blue T on January 5, 2020

Blue T, are your actual going to do something with this station? Could you give people an idea of when and what the plans are? The music so far is good. However it’s the same thing over and over.
By: Jeff Tilton on January 23, 2020

Bro, is anyone alive over there?
By: Christopher K on February 4, 2020

Jim, No legal station ids are airing that's a great big no no with the FCC. Big fines too I believe.
By: Mark J Powell on February 28, 2020

Sorry Jeff Tilton, I'm not involved with the station, just a listener. Kind of weird though, up until a couple of months ago, they were playing more variety, some Irish folk ballads, the theme from James Bond, some Dave Brubeck, and more. Then suddenly in the late fall is was pared down to Eilen Jewell, Jake Xerxes Fussell (Push Boat, Pork and Beans, Rabbit on a Log, etc...), a coupe of BB King songs, Bill Withers (Aint no Sunshine) and a couple of other tunes. Not sure why the reduction in variety or if there are any plans to expand someday.
By: Blue T on March 2, 2020

Recently noticed 92.9 FM went away and by surfing the dial, I found "The" music at 98.9. (KYWS) Same repetition of brilliant songs format. I like it, but an occasional expansion of songs & artist would enhance the station & LISTENING experience . If there's anything that I could do to keep you playing ON, please let me know. Go West Sac, Go!
By: Ernest Abe on March 22, 2020

Just found this gem of a station today. A wonderful mix of diverse music. So refreshing.
By: Martin on November 15, 2020