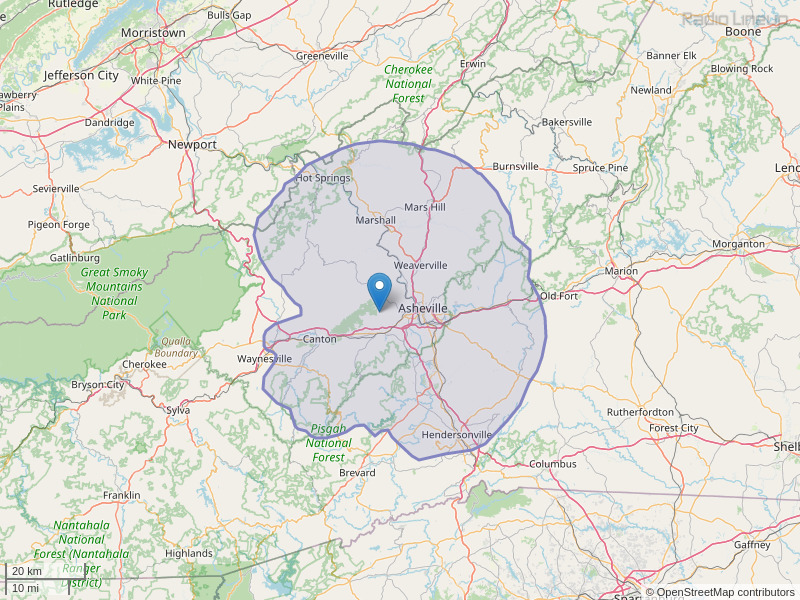 I was recently visiting Asheville and went to the Wait Wait show- highlight of my trip- and would love to get one of your Cesspool of Sin T-shirts for my husband. I understand that the brown ones were produced as a fundraiser for your station. Is this possible. Thank you, Robin
By: ROBIN Paredes Brown on August 12, 2013

Nick Knardirell's, Minnesota: Her Account; Her View, fiction crime, suspense, thriller is now available at Malaprop's bookstore in Asheville.
By: S on January 18, 2016

Would love to support the radio station. Is there a link for the station, or Radii store? Thanks
By: Nate Haynes on October 23, 2016

FOR IMMEDIATE RELEASE: December 10, 2016 DON KINGS TURKEY TOUR NASHVILLE & SEVIER COUNTY, TN ASSISTING THOSE IN NEED Nashville, TN, December 10, 2016 Today, Don King announced through his associate, Jimmy Adams the distribution of turkeys to the Nashville less fortunate and the Tennessee wildfire victims. Donald "Don" King is the most internationally recognized boxing promoter known for his involvement in historic boxing matches including Muhammad Ali, Joe Frazier, George Foreman, Larry Holmes, Mike Tyson, Evander Holyfield, and Julio César Chávez. He has been an outspoken figure in the sporting world and has always shined in the public eye for his humanitarianism and acts of kindness. Known, for his phrase, “Only In America”, Don King will be exemplifying his compassion through his generosity with the “Don King Turkey Tour” distributing 500 frozen turkeys to those less fortunate in Nashville, December 19, 2016. Exclusive interviews of the legendary Don King can be seen on itube247.com Jimmy Adams, CEO of iTube247 and Nashville-based Adams Entertainment, contacted Cheryl Robeson Piggott, Founder of The Stars Foundation, World Orphans Day, and surrounding community based organizations for distribution of the holiday turkeys to those in need in Gatlinburg. Itube247 film crew along with The HEARTS on FIRE Ministry of The Stars Foundation and its television production crew will be on hand capturing compassionate actions by the Ambassadors of Goodwill. As part of Don’s King yearly turkey give away he is sending Seven hundred and fifty frozen turkeys in a Costco freezer truck that will arrive at Community Care Fellowship located at 511 South 8th Street in Nashville on Monday December 19th at 11:00 am, where 500 turkeys will be distributed to families in need. On Tuesday, December 20th the remaining 250 turkeys will be distributed with the assistance of the Sevier County Food Agency and the community leadership at 890 Old Knoxville Hwy, Sevierville at 11:00 am, servicing the wildfire victims and displaced people in the region. Helping to hand the turkeys out to the families will be Entertainer Deborah Allen, itube247 Host Masey Adams, Little David Wilkins, Leon Everette, Jeff Bates, Pastor; Roger J. Piggott and more. The holiday time is traditionally a time for love, peace and joy for many. Let us not forget the underprivileged and those who have lost all through tragedies such as the East Tennessee wildfires that swept through a week ago. Although it is through holiday seasons and unforeseen tragedy that sparks the determination and desire to help others, goodwill towards all with simple acts of kindness is a practice that we can do every day, no matter the season. For More Information, Please Contact Our Public Relations & Media Department Roger J. Piggott VP Media & Public Relations Tel: 704 978 9054 | Email: iceman@iceman.ca Itube247 Tel: 615-300-0088 | Email: jimmy@itube247.com
By: Roger Piggott on December 16, 2016

Can someone advertise on your public radio station? If so, what is your number sod listeners and what are your rates? Love the show. Listen to it when I'm in Asheville, but I've never heard anything more than Public Announcements.
By: Patrick Lilley on October 2, 2018

I would like to come on your radio station to sing Peace in the Valley I've done several shows I've done played with the bands I do karaoke but my favorite is singing gospel my phone number is 865-360-3656 yes I am in the Sevierville Tennessee area but but I would be willing to travel to sing on your show thank you and God bless
By: Billy rinck on March 25, 2019

Hi, I know you don't know me, but I would really like to have a moment of your time. This is just to make you aware of the kind of people that are putting on events in your area. We would really appreciate it a moment of your time.  I'm emailing you because of a situation that happened over the weekend. You allowed John Bruner to put on an event in your town. Are you aware of him taking peoples money for services he's not giving? If you will please give me a moment of your time and then you be the judge. When festival coordinators or people in charge of an event have a standards they stick to. When booking an event the coordinators won't take no more than three vendors with the same product. It gives each vendor the opportunity to make their sales and doesn't clutter the event. The coordinators will also tell each vendor how many vendors they have selling the same or similar product. The coordinator will also tell vendors that their returning vendors get the choice of where they want to be. Each coordinator will send each vendor a vendor list for who's participating and instructions for set-up / breakdown times and maps to the event. Every festival is supposed to be this way and gives the vendor the chance to decide as to whether or not they would like to participate. It doesn't matter if you have 5,000 people or 20,000 people, the vendors are the lifeline of any event. People only have so much money to spend and when you have a good coordinator they lookout for their vendors and keep these standards for a good event and vendors wanting to return another year. I can send you countless reply's from coordinators for events as far back as five years that keep these standards and morals and respect for their vendors. Festivals are how many vendors make their living and need to be in events where this is possible. When you get a coordinator that is in it for himself it makes a bad event. John Bruner scheduled a festival for September 14th 2019 in Marion, NC. He charged $50.00 per space for this event. He claimed he had 1,000's of vendors wanting to be in this event. He told me in an email for every one space, he had a 100 more wanting it. He was taking money from vendors all year long. Not one time did he give us a list of vendors, he did not tell us that returning vendors had first choice, nor did he send us the instructions. Each time I asked the conversation changed, he avoided it each time. He was really nice and convincing and told us that we had nothing to be concerned about. Once we arrived we were instructed where to go and was put as far back as anyone could have been put. After we finished our set-up we learned that there were at least six more vendors with the same product and that they had been hand picked by John himself. Had we known he was taking people's money for his own self gain we would not have booked this event and could have booked another event.. IT's not about complaining, it's the principle or the matter. The man took money for services he didn't give. We have since asked for a refund from him because of this. He in turn laughed at our faces and I have emails from him on this matter as well. I am reporting him to the law, the state, Paypal, and festival committees that let him place his adds for his events and numerous places. Thank you for your time, I hope this hasn't gone on deaf ears. Penny Eslinger 706-374-3434
By: Penny Eslinger on September 15, 2019