WEMR is a low-power FM radio station broadcasting at 92.7 MHz. The station is licensed to Chambersburg, PA. 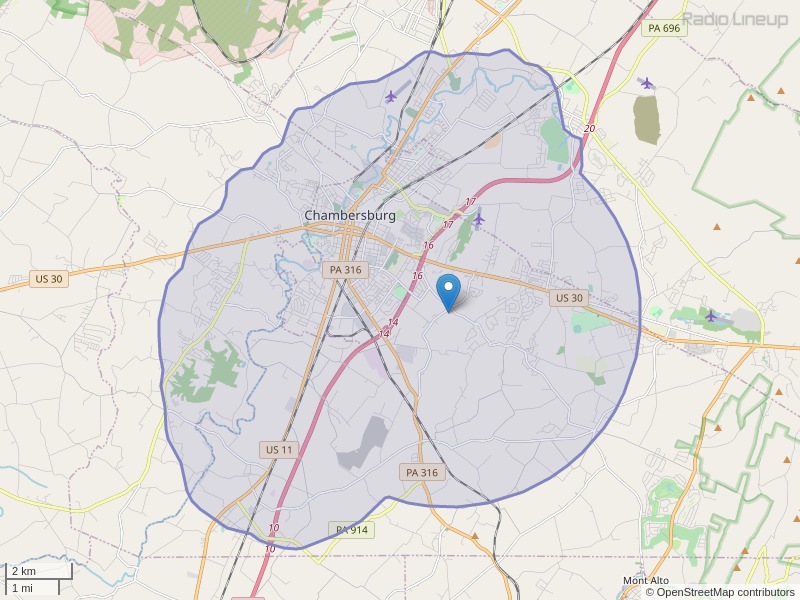 Your station sounds like to much reverberation
By: Driver on September 1, 2017

It's absolutely great! Haven't heard some of those cuts for years. Just need a little more power for some times of the day. And, for all the locations where I listen about five miles north of Chambersburg.
By: Anonymous on November 5, 2017

Thanks for listening! WEMR is a station owned by the Chambersburg Area School District. I am a teacher who will be instructing some radio courses and adding programming as we get students trained in the next year to host their own radio shows. About your comments: * We wanted a format that no other local station has, so we went with "Yacht Rock" (soft pop rock from the late '60s - '80s). Plus, since we're not a commercial station, we can play some older cuts and deeper tracks that you normally don't hear anywhere. I know that I like hearing music that I haven't heard in a while, and I hope you do too. Who wants to hear the #1 song from 1985 because we've all heard it a million times? I want to hear the #100 song because I probably haven't heard that song SINCE 1985! As we build the station's programming, you will hear students hosting their own shows with appropriate music of their own choosing. When students aren't broadcasting, it will switch back to the Yacht Rock format. We're still a while from having students on-air, but that is the ultimate goal. * We recognize that every now and then the sound gets distorted. Since we went on the air in February, we've been running off an old laptop computer, which does occasionally have issues with the other equipment needed to run a station. It fixes itself after a few songs. Once we get our new broadcast studio set up in a classroom at CASHS, the noise should lessen because of better studio equipment (This should be completed by end of January, 2018). We now have a new transmitter and 200-foot antenna, which were assembled and wired up in November 2017 at Falling Spring Elementary School and which have increased our transmission radius to about 15 miles. I've picked up the station north to south from Exit 29 on I-81 to the PA/MD border. I've also listened from Ft. Louden to Roxbury, so we're getting better! * If you'd like to see some pictures of the construction and status of the station, go to this link: https://www.casdonline.org/Page/16352 We hope to keep growing, so keep listening! And thanks for your comments!
By: berriand on December 10, 2017

I LOVE THE PLAYLIST!YAGHT ROCKIS THE BOMB KEEPJAMMIMG BEST STATION AROUND!!
By: Ryan S on January 3, 2018

My “seek” button brought me to your station a few days ago and it hasn’t been changed since. I was thrilled to hear some of my favorites that were buried in the charts I don’t hear often and sang along with the good memeories. I can hear the groans of students with some of this programming. They will have to admit they heard them growing up, and probably brings back some memories of growing up. Well done “Berrier” (your name is stil a staple in important conversations in my house)
By: M. Stewart on January 7, 2018

We stumbled on to this station today and love it. It's perfect background music for our office. Hope you won't change a thing! Kudos for a job well done!
By: CVDC on January 24, 2018

Don't change the format please. Myself and my coworkers are loving your station. So nice to hear tracks that are hardly ever played. We were so tired of the constant repeat from other stations. Your station is the best!
By: Travis on January 30, 2018

Love hearing these songs that I haven’t heard in years! I do wish your range was further but for now I will take what I can get!
By: Becky on March 2, 2018

The family really enjoys this station.....love the format! Great, top notch music; please do not change a thing. Why can't all stations be so cool? Traveled all over the U.S., by far best radio station ever! Keep up the great work y'all!
By: Mrs. Jones on March 10, 2018

Love hearing songs I haven't heard in ages vi work night shift & listen to it
By: Lisa on March 19, 2018

Just located our station. What a very pleasant surprise. Love the playlist. Really enjoy the uninterrupted satilitte-like broadcast format.
By: Tom on May 22, 2018

My husband and I LOVE your station and think you have really hit on a much needed genre. Absolutely love the "yacht" format top 100's of the 70s and 80s! It's so refreshing to hear songs that are more than just the top 10. Looks like you are already gaining a cult following. Please don't change your line up. Do you stream online yet?
By: LIsa on May 29, 2018

Awesome station, no commercials, all music and a out standing play list! Takes me back to my younger days when life was simple thought I didn't know it then. Keep up the good work and don't ever change!
By: Dan on June 27, 2018

This is a wonderful station and I have my home and car radios set to 92.7! The songs bring back so many wonderful memories. Don't change a thing! Thank you!
By: P Sampson on July 15, 2018

What an amazing and refreshing change from 95.1!! I've heard songs that I haven't heard since I was a teenager! PLEASE, PLEASE, PLEASE...Never change! Keep up the fantastic work!
By: Art B. on July 18, 2018

Fantastic format! I love the format. It spans so many generations. Keep it going.
By: Jeff J on July 19, 2018

Lots of improvements being made at WEMR. Check out the station webpage for pictures and info: https://www.casdonline.org/Page/16352 We also have an email address and phone number now, if you'd like to contact us with any suggestions, questions, or recommendations. Thanks for listening!
By: berriand on July 28, 2018

Yacht Rock ! prefect lol , everyone that comes in the office wants to know what station we have on, so words getting around . Just love the format please don't change it.
By: jackie on August 9, 2018

What are the hours for the station? I was trying to listen today around 6:30p and was hoping to see if y'all were airing the football game, but all I could get was dead air.
By: Mel on September 22, 2018

Wow, great music . I think I'm reliving my school days. Keep it going sounds great way out here in the sticks.
By: Jerry on October 31, 2018

What a great station...haven't heard sone od this in years. While not "yacht rock" could you play any cuts from Steely Dan, Atlanta Rhythm Section, and Traffic? Keep up the great music!
By: Mike on November 22, 2018

Awesome radio station! Absolutely love it! Keep up the good work!
By: Dan Allis on December 1, 2018

Awesome radio station! Absolutely love it! Keep up the good work! Question do you stream over the web? Can't seem to find your station.
By: Dan Allis on December 1, 2018

We don't stream yet, but plan on it in the future! Also, I believe Steely Dan is Yacht Rock, since they've got a bit of a jazz feel to their music. So much so, in fact, that we have almost all of their greatest hits LP and some lesser hits already in our rotation!
By: berriand on December 16, 2018

Nice mix of classic & soft rock from the 70-80-90s. I recently discovered your local station while setting up a new AV receiver in our nearby home. Now we have your station in the “first tier” of both our vehicle radios too. Thanks for playing the great tunes!
By: John B on June 29, 2019