WJTQ is an FM radio station broadcasting at 100.7 MHz. The station is licensed to Pensacola, FL and is part of that radio market. The station broadcasts Adult Contemporary music programming and goes by the name "Journey 100" on the air with the slogan " Gulf Coast's Best Music". WJTQ is owned by Cumulus Media. 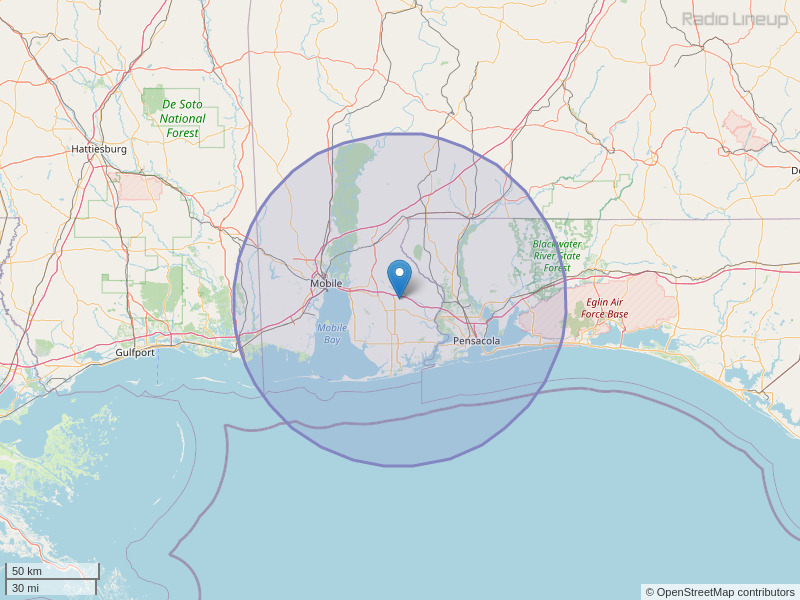 Finally a station that has it right all others aren't even recognized on my radio anymore.
By: Brock on September 6, 2011

Listened to your station live this morning on another skip like I did 7 years ago. I live in Starkville, Mississippi and your station is not coming in quite as clear, but I did find you on the internet and you have a great online listening site!! Love your music and hope someday to get to the Pensacola area if not this year, next year. My sister, Helen lives in Niceville and teaches at Niceville HS. I love the Pensacola/Panama City Beach area and just listening to your site gives me a quick vacation to Florida. Cannot afford to travel at the moment and haven't been on a vacation since 1997. Thanks for having your station online!!! God Bless, HHH
By: HORACE on March 18, 2012

More boring radio by Cumulus. How about an original ideal and bring on some colorful on air talent.
By: Raj on March 18, 2012

I'm so dissapointed that you cut excellent news radio in favor of mediocre music programming with little to no warning. rest assured I have already taken 100.7 off of my presets.
By: caleb jacobson on March 2, 2014

i loved listening to 100.7 talk radio.. now it's not wcoa any more, but 'jet'... playing the same boring oldies that other 'easy listening' stations play.. if it's got to be oldies, then play something that did NOT get much air play when the 'album' was new please..
By: N J murray on March 20, 2014

I am not very impressed with the broadcast professionalism of WCOA for the past 6 months. First, many times a segment will end and two talk-overs will occur. that has gone on for as long as a minute - is that worse than a minute of "dead air"? Is the station simply on automatic with no one minding the store? Second, the recent equipment failure that precluded ANY broadcast makes me think your funding is running out. Do your subscribi9ng merchants get their money back for their commercials not running? I sure hope you get your management and technical problems fixed soon, or you will lose some of your top programming. When you do get back on air, please explain what happened and have the courage to make it the truth.
By: Mike on May 24, 2014

As a former clear channel employee I want to say that Clear Channel, aka I HEART AND cumulus have destroyed the quality of radio in America. The day I got fired, 500 broadcasters across the country were terminated. Happened every year. We called it Black November. As radio talent disappeared so did listener loyalty. No local news and local talent only doing short voice overs with no personality. Can you name any local djs.Have you seen billboards or TV spots for any Station? Music is played by computer and announcers are in other cities or prerecorded. It's not done to provide quality entertainment but to do it on the cheap.
By: Charles Moss on June 7, 2017

I enjoyed listening to classic rock. I do not enjoy propaganda crap. Newsmax. really! I may live in a bright red city, but I do not need to hear crap from a radio endorsing it. will be turning off.
By: diane wilson on April 17, 2020