Owner:
Board Of Trustees Of Community College District No. 508, County Of Cook And State Of Illinois 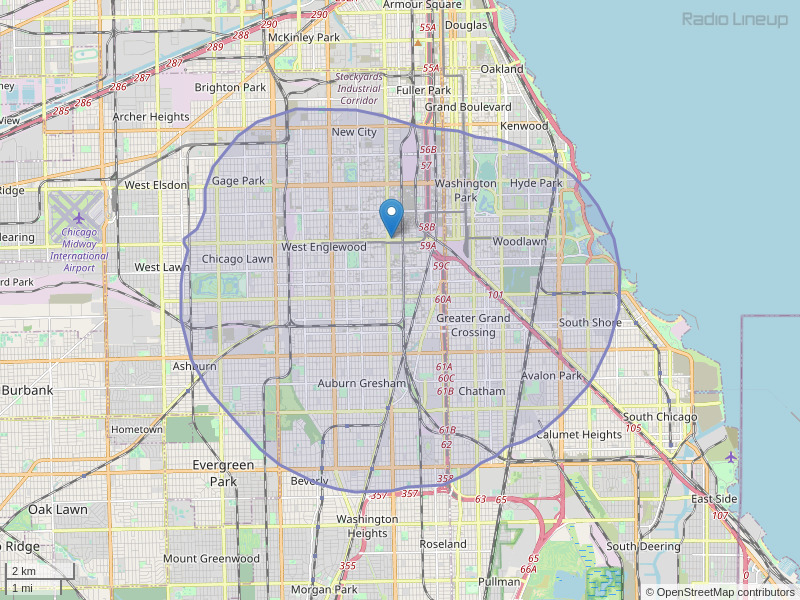 I've been a fan of WKKC 89.3 FM for a number of years and has never questioned anything concerning the programing or on air personalities,i just enjoy the station and the music.But,i have to ask,what happen to Al Greer?I miss "BedTime Stories" at 7 pm on Sundays.I'm a fan of WKKC 89.3FM,and i may be a bit dissapointed in not hearing Al Greer anymore,but i will always be a loyal listener.
By: DeRon K Williams on January 7, 2012

What has happened to Al Greer on saturday night and sunday night, is he still a dj at kkc and if not can you inform his listeners as to what happen?
By: Don Jackson on January 16, 2012

A song was plyed by Revell Harper last nite between 10:30pm and 11:30pm. I think the song was" Could it be me loving you by the Gifts " Can you confirm the correct name of the song and artist? Thank You
By: Lorraine A on December 29, 2012

More, more and more music, the kind of old school you play from 1200-100 everyday. To my personality friend, this is your SCR servicer, I hope you don't forget a shout-out to my daughter Brandey who plays for The University Of Cincinnati.
By: Timothy Tarver on December 17, 2013

I live out of town. A friend visiting here told me that WKKC was no longer on the air. Is this true? I sure hope not. If I ever move back I hope the station is still on the air . It's been my station of choice since August 1994. Plus I've also attended school there briefly.
By: Albert Jackson on December 23, 2013

I am currently an ccc student. While driving back home in the below zero weather you all played a song that really touched my heart. A lady songstress sang so divine she said The Lord is Blessings Me Right Now! Please email the Artist name please,please,please.By jjonesJan27,2014
By: JaneenJones on January 27, 2014

hi, could you tell me when the "dusty musty" oldies show is on. a while back, it was on tuesday night around 10pm but i've lost track of it. really liked it. please email me if you have time. thanks, rm
By: RICHARD M MCGRATH on July 28, 2014

It would be nice if on your Thursday night steppers show with Lavell Harper she could name some of the artist playing. That way u could try to download them.or is there a way u can google the playlist .Thank u we enjoy the show
By: Hchapman on November 21, 2014

This is for Ray Kneel, I don't know how to spell his name. I love the dusties that you play but, the background as well as the lead vocals don't make it! On most records they can't be heard. Please, please, please, get that right for me, okay?
By: Richard Moore on April 26, 2015

On Saturday, May 23rd in the afternoon, a song was played "I just want to be what you want me to be" Whose is the artist and the title? Thank you. Verna Hooks I love listening to your station.
By: vernahooks on May 23, 2015

Hi I am listening to Sunday love songs and heard some songs I liked is it possible to get the playlist. For Sunday February 28, 2016
By: Vivian Clear on February 29, 2016

I love listening to my kkc radio station i love my house music n slow james the best radio in town.
By: Felicia Bradley on November 18, 2016

Check out BermudaCal ; you will find him on soundcloud if the station is not playing him. I love his music ...
By: Alistair Smith on August 31, 2017

If you have Mexican nationality and live in the United States, Identify WHERE AND HOW WE CAN HELP YOU Monday July 16 from 9 am to 10:30 am or Tuesday July from 6 pm to 7:30pm Comerciantes Unidos De Pilsen CC 1810 S. Allport St Chicago IL 60608 UMP is combining efforts with General Mexican Consul to inform ALL Mexican Citizens and everyone who knows or lives or works with them the legal support and guidance is out there; available for them as well as for employees and upper Management. We would like to come to your station and promoted if all possible. Please call me at 847-704-0230 to schedule a time and the date that might work for you.
By: Alex Martinez on July 15, 2018

Can I get a playilst for the Thursday Night Steppes set on August 9.2018? Thanks, the music was great!
By: Louise I Harris-Macker on August 10, 2018

Hi, I was enjoying the station between 5pm and 6 pm on Saturday January 19th, there was a song i really haven't heard in awhile and it put me in a good mood. I got distracted with something and forgot the song. Can i please have a playlist of that time period. I believe the song came on towards the end of that hour. If you can help thanks! Tanya
By: Tanya McKenzie on January 20, 2019

Hello, what was your blues song list today?
By: Fredrick Cherry on March 11, 2019

Is smooth Steve Williams, my home boy from the Alabama country, out with an illness?...He hasn't been on the air in months, it seems!
By: Leon Gholston on August 8, 2020

Steve, Wher u at??...They're not even call'in your name on Sat. morning anymore! What the heck is go'in on Homeboy from Panola??
By: Leon Gholston on September 19, 2020

What happened to the Sunday afternoon Blues show.
By: Kenneth Johnson on February 14, 2021

Where is Smooth Steve William?
By: Anonymous on April 3, 2021

What happened to the Smooth Steve Williams Saturday Morning Show?
By: Eben A Credit on May 8, 2021

No one has bothered to respond to my inquiry about Steve Williams or his Saturday morning radio show!/!...Why???
By: Leon Gholston on May 15, 2021

Leon, The website still lists the show on Saturdays, and any other web search I did was a dead end. If I could find more information, I would. It's best to e-mail or call them (website: wkcc (dot) fm, click on contact). From ZBG
By: ZBG on May 18, 2021