WNWX is an FM radio station broadcasting at 96.5 MHz. The station is licensed to Rhinelander, WI. 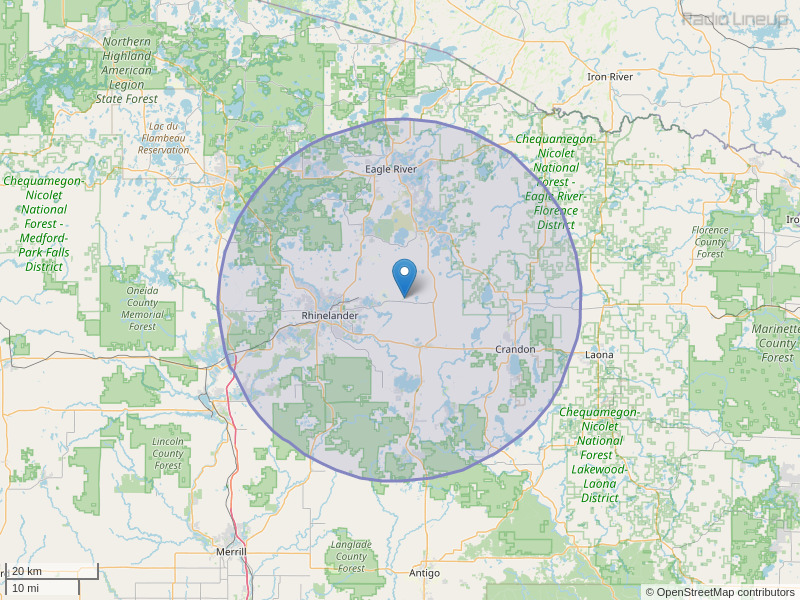 Why aren't the Brewers/Cub game on today? There's only so much Bill Michael I can stand!
By: Roger Pluedeman on September 5, 2016

What happened to your website... I can't find anything anywhere
By: Kristy Secord on April 18, 2017

I was wondering if you still do free community events announcements? Gogebic-Ontonagon Community Action Agency has our Frozen Run- dra race on 12/2/17. Registration starts at 9:30 and the race/walk begins at 10:00 We have a 2 & 6 mile run and 3 mile walk. There will be a continental breakfast for the participants after the race. There is a 50/50 drawing and $1.00 raffle basket chances. This is our annual fundraiser. Thank you for your assistance. Luan Jacobson
By: Luan Jacobson on November 8, 2017

It does not appear to be common knowledge that the station will switch to music soon. WHAT A DISERVICE ! Those that do not have technology, relied on this one station for latest sport news, scores, talk, in this rural area. Shift workers, seniors, many who listen 24/day. The personalities in the evening hours have become "friends" to the regular listeners who apparently have not input. With every station, except PBS, who in the world needs more music??? Not my station if it is changed!
By: Jan Mesko on February 6, 2019

What, no more sports!! Are you going to carry Brewers & Badgers games? Other than that, I and quite a lot of Tomahawk listeners will not be turning in any more.
By: Bill Voigts on March 1, 2019

No more sports? Bad business decision, you just lost a loyal listener (and I am sure I am not the only one).
By: Scott A. Meitus on March 2, 2019

I heard horrible sounds coming over my speakers, so I quickly punched the button to WHOH. Same horrible sounds. Tried again. No way! Must be a glitch. Tried later. NOOOO! Say it ain't so. Has someone lost their mind?
By: Ezra Griz on March 3, 2019

Well could not tune in to station just got crappy music, sounds like Mike Wolfe blew it again.
By: Gary Mak on March 4, 2019

This is ridicules who needs another music station to listen to? We need our sports talk radio please bring it back! You have lost a loyal listener.
By: Tim Clark on March 4, 2019

I can't believe they changed formats. This was one of the most listened to stations in northern Wisconsin and kept us up to date on the whole sports world. Typical. I haven't changed stations since it first came on. I deleted 96.5 from all my presets as we have mega overkill of top 40 stations. Very, very poor decision.
By: James on March 4, 2019

Horrible horrible decision to change programming away from sports. The music you are playing can be picked up anywhere. You were unique. Now you're just another sub par radio station. Will you be dropping Badgers and Brewers also?
By: Mike Bishop on March 4, 2019

Can’t believe you dropped sports talk! Such a shame to remove not only national sports talk shows but local Wisconsin show with Bill Micheals now unable to reach all of us in the north woods that enjoy Wisconsin sports news. Lost a loyal listener and I will no longer listen to any Heartland Communications affiliate station either!
By: Chris on March 5, 2019

I used to listen to this station all the time and so did my friends. I don't understand why such a successful format would be changed!
By: Jeff on March 5, 2019

What in the actual f@#$ really this is the worst decision in all of the sports world! Wisconsin sports fans are heartbroken about this! And worst of all i turn the channel on and its a latino song on in Spanish! Yeah exactly the kind of music American sports fans want to hear! What a fu@#$&! Joke!! The owner of the station needs to listen to the people and bring it back asap!! Its a real bummer man!
By: Beau on March 5, 2019

You have gto to be f%₩@! $g kidding me ! Another top 40 radio station? We need That like we need another snowstorm. Whosever decision this was should have their skull scanned. PATHETIC !
By: Steve Krueger on March 5, 2019

Who needs another lame radio station playing the same music that's played on too many stations already. Bring back the sports
By: CRAIG DOTTER on March 5, 2019

Well I guess I don't have to listen to the local radio stations anymore. Forcing everyone to stream via internet. Who needs another music station. Surprised you didn't make it country music. 😔
By: CRAIG E NEHLS on March 6, 2019

I can’t believe you changed the format! This station was one of my favorites. NO MORE! Another crappy music station. No thanks!
By: Ken musial on March 6, 2019

Please tell us why you changed formats....on second thought, please just bring back the sports format.
By: Bryan on March 6, 2019

Opens door for another station to take the market for sports.it was the only station we listened to
By: Doug on March 8, 2019

Bought a new Toyota January 2014.. set the radio to 96.5 a day later..It's been there ever since..turned the key the other day to Michael Jackson..confused the hell outa me....musta bumped sometin...nooooo..he wouldn't go away....a ride in my truck will never be the same...I need my sports radio!!!
By: Mark on March 9, 2019

I probably listened to 30 hours of WHOH a week. Maybe more. Great programming - especially Bill Michaels. But I really enjoyed Dan Patrick and Scott Ferrall a lot as well. The other shows are solid, too. I guarantee a top 40 station will not get the number of listeners WHOH had. Someone blew it when they opted out of a format that was filling an actual need in this area. There are many, many music stations. Really, too many modern country music stations. Why not make the 93.7 frequency into a top 40 station and try to compete with WIFC there? Most people I know opt for the classic country station (WOBT/WRHN) when listening to country music anyway. This area has a relatively old population. Top 40? Who's asking for that?
By: Craig on March 9, 2019

I don't know how they can compete with WIFC with the way they sound now. The audio is distorted, and they are broadcasting in MONO. At least get with the 70's and broadcast in stereo. Just another stupid decision by corporate bean counters. Someone said they had a Facebook page.. I was going to send them a message, but they must have took it down.
By: Greg on March 10, 2019

With out sports radio I will never tune to this channel ever again unless they change the format back to sports radio. What a dumb decision by some moron!! This use to be the only channel I would listen to not anymore! HORRIBLE MANAGEMENT DECISION!!!
By: Anonymous on March 11, 2019

I am not a sports fan, and generally dont go out if my way to listen to sports news. But i listened to this station to keep me in the know about sports. What little i have heard of the music, it really isnt that good....more then likely wont be listening to the new format.
By: Msmitj on March 12, 2019

I haven’t tuned into 96.5 for awhile since I’ve been out of town for work. Come back, ready to listen to some DP and.....what am I listening to? I thought it was a mistake - or maybe another station was walking over it. Nope. You guys really screwed the pooch on this one. Bring back sports talk!
By: Jesse on March 14, 2019

Really!!? I mean really?? Another boring music station now. Bill Michaels?, Badgers?, Packers? Bewers? Back to classic rock I guess. Why take away Wisconsin sports? You lost my vote I won't be tuning in to your station anytime soon. Only to see if it gets put back on. Otherwise same old garbage!!
By: Casey on March 15, 2019

Why did the format change to “music”? Every station up here plays music. You were the only sports station northwoods residents had to listen to Wisconsin and national sports. It makes NO sense. What a a stupid decision. Hope you go out of business.
By: Pete on March 16, 2019

I hope your advertisers realize that you were (past tense) the most listened to station in the area and now you're not. you were the primary station I listened to - home, car, workshop. Now I have no reason to ever tune in again. the CBS lineup has gotten worse over the years but Dan Patrick and Bill Michaels were great, not to mention the Brewers/packers coverage. You now have officially lost your market share. Your profit margin is gonna tank. thanks for nothing.
By: joseph hunt on March 18, 2019

Enjoyed listening to the Bill Michaels show once I hit the northwoods.Tuned in last week to 96.5 and just had a bunch of garbage music on there.Why?
By: mark on March 21, 2019

Everyone's asking WHY? Has anyone heard or received an answer to this question? I have nothing to listen to on the radio any more.
By: Luda on March 28, 2019

another decision made by some one on top that has no idea what's going on! bring back the sports talk shows and get rid of that crap that's on there now.
By: jeff on March 31, 2019

What happened to the Brewers broadcasting. Nothing but silence
By: CRAIG DOTTER on April 2, 2019

Done with this station, now useless. Not sure what they were thinking.
By: travis on April 8, 2019

Pretty sure there was no thought involved
By: Jeff on April 8, 2019

This was the only station I listen to for sports in the Northwoods !All gone . Please bring it back
By: Jim T on April 10, 2019

I was unable to tune in to the Milwaukee Brewer's baseball game last night on your radio station. Has the broadcasting station changed for Brewer games and if so, what station is now broadcasting these games in the Pelican Lake area? Thank you.
By: Ron on May 22, 2019

Tried to tune in to the Brewers game the last 2 nights and it wasn't there, nothing was. What happened??
By: Lenny on May 22, 2019

What happened to the Brewers? During the last several Brewer's broadcasts you indicated that the game would be covered by another local station. I can't find that station. What gives
By: Scott on May 22, 2019

There are about a dozen other stations in northern Wisconsin that carry Brewer games.. Are all you people helpless that you can't scan the dial and find them? I know WSAU, WACD, WCQM, WRJO, and WJMS come to mind right away. I miss Sports talk but I didn't miss the Brewer games interrupting my favorite shows, and there is too much overlap with Brewer games. WHOH didn't need to carry them to begin with.
By: Greg on July 2, 2019