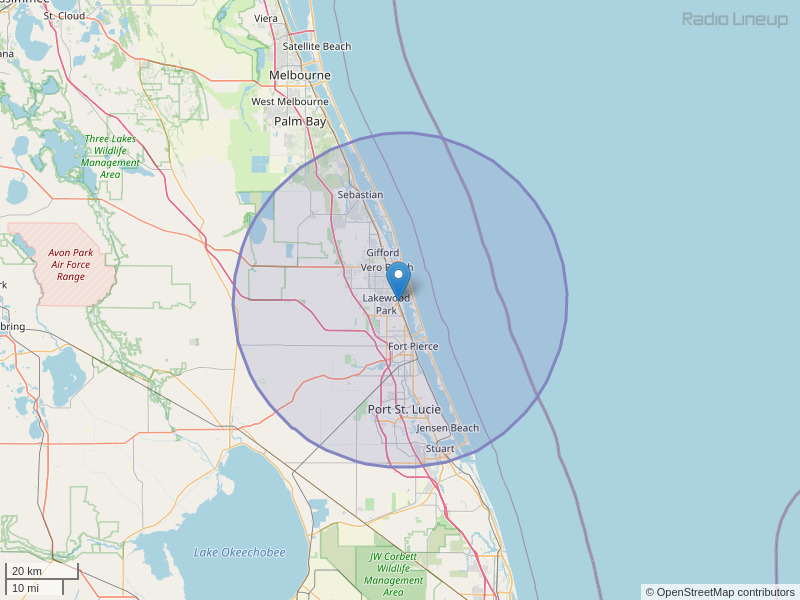 Very good programing, I listen every night and some daytime. Why the no sound and the volume drop off in the AM? some time I thought that I moved the dial, now I just leave it alone and wait for some one at the station to push the right button. but I do enjoy your entire line up,but not so much Friday night.
By: kenn on March 27, 2013

What happened to Rush Limbaugh on Rush Radio on this station at 12PM? All of a sudden without warning there was a continuous loop of the Macarena during the holidays and then country music. Where is Rush?
By: Merry Chapman on December 26, 2013

Just what we need another country radio station No rush no Glenn no Sean no mark Will not tune in anymore.
By: John on December 26, 2013

Really another country format( POP COUNTRY ) I looked forward to listening to rush every work day. Well no loss really, I can get it on 540 a.m. out of Orlando.
By: David Altenhoff on December 27, 2013

Why was the old lineup removed. Don't you want people to know what is going on? will no longer listen to your station and not patronize your sponsors.
By: Catherine Cilenti on December 27, 2013

You lost me. I had my radio on all day and night (business and home) to talk radio 94.7. Will be listening elsewhere.
By: Anonymous on December 27, 2013

You lost me. I had my radio on all day and night (business and home) to talk radio 94.7. Will be listening elsewhere and will not patronize your sponsors.
By: Anonymous on December 27, 2013

Just what we need another country station now 3. Already cleared station from radio. Guess some liberal owner took over
By: David e on December 28, 2013

I live in Treasure Coast area Stuart and Port St Lucie what station can I tune into to hear the morning rush gets me to work every morning. thank you
By: Susan Graham on December 29, 2013

Extremely disappointed with change to country. Morning rush was the best program in the mornings. Cannot believe you took it off! Is it on another station available in the Vero area? Will never listen to 94.7 while it remains country. Please go back to original programming. I wonder how many other listeners you have alienated??
By: Mary C on December 31, 2013

Aww Come on! Country, are you kidding. As others did, I thought I hit the dial. I listen everyday starting at 4:30am, Coast to coast, then the line up as I drove the site, Rush on the way home turnpike every afternoon. Not a boring moment. Are you nuts? Country? The distance I drive I can't get Coast to coast anywhere on radio. You're insane. BRING IT BACK PLEASE. By by till then LL
By: Laura Lee on January 5, 2014

Sorry to see you go to country. I listened ever day to Rush, Glenn, Sean, and Mark. Will be looking for them and not listening to country
By: Tom Goldthwaite on January 7, 2014

OBAMA IS STOPING ALL PEOPLE FROM KNOWING THE TRUTH ABOUT THE KING
By: JOHN BAINBRIDGE on January 9, 2014

I am terribly disappointed with your choice of discontinuing Rush from the 12 to 3 slot each weekday. I could count on your station to ALWAYS carry him whereas AM stations disconnect with other programming. What is this country thing??? Very disappointed with you and will not listen from now on ...
By: Mary Smith on January 10, 2014

I was so disappointed to learn Rush Radio was gone, although I NEVER listen to Rush or Beck. Every night I looked forward to Coast to Coast AM and the two morning guys. I'll not listen to yet ANOTHER country music station. This was the ONLY talk radio I got in my area, besides religion, which I won't listen to.
By: Ali on January 15, 2014

I understand a business change that influences the normal line up of broadcast shows, but the changes at Rush 94.7 were sudden and seemingly unannounced. The word secretive comes to mind. This kind of secretive agenda normally underlies decisions driven by politics, and not needs of the business. This looks more like a decision against conservative talk radio, and would do any Nazi-Lib proud. You have lost me as a listener, and I will not support your advertizers. Besides, the Pop Pseudo Country Rock Music stinks.
By: Luigi D'Marsh on January 15, 2014

The best while driving radio station for the Treasure Coast area was Rush radio 94.7fm, no doubt about it!; until they replaced it with the sorry & sad ass mindless howling country music. I've replaced my car radio station set button to another station, screw 94.7. Shame on you idiots who made that decision. This GOY is still going to get the word out about this creeping government's takeover of America for their "new world order & one world Zionist oligarchy government.
By: disenfranchised listener on January 30, 2014

Loved waking up to Coast to Coast AM, a nation wide radio station that kept you up on real current life interesting subjects. I don't listen any more. Not a country fan. Have even deleted it from my car radio.
By: Marshall on March 9, 2014

Do you have 30 minute radio shows on weekends?I used to have a number of financial shows on 94.7 when it was owned by Clear Channel
By: William Laufbahn on April 19, 2014

St. Lucie County Sheriff caught street racing! Today around 9, 9:30am, the owner of Kapoya Energy Drinks will be presenting a donation of 150 bikes and a $5000 check to Sheriff Ken Mascara for the needy children of St. Lucie County. He will also be challenging the Sheriff in a bike race. If the sheriff wins the race, the amount of the check will be doubled to $10,000!!!
By: Laura Hanson on December 13, 2014

Hello! Do you honor anniversaries/have an 'anniversary club'? Our Anniversary will be the 30th of this month (married on January 30, 1971) in Las Vegas, Nevada. We work in Gifford at a restaurant supply off of U.S. #1 (Mike and Deena Rose).
By: Deena Rose on January 7, 2016

Why is Rush Limbaugh not available on Sirius xm. Needs to be on satellite radio.
By: Mel MAHLER on December 6, 2019

Why on earth would you drop this great broadcast? And fill it in with more Country music? come on.... put Rush back on.
By: Joan Ross on July 4, 2020