WPTI is an FM radio station broadcasting at 94.5 MHz. The station is licensed to Eden, NC and is part of the Greensboro, NC radio market. The station broadcasts News/Talk programming and goes by the name "94.5 WPTI" on the air with the slogan "The Piedmont's Talk Station". WPTI is owned by iHeartMedia. 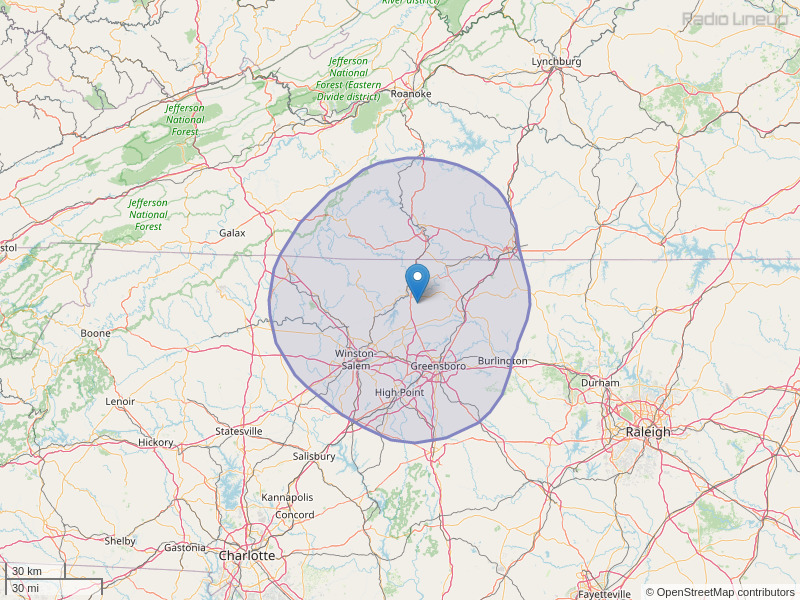 If biased, political blather is your favorite format, go no further than 94.5. Your conservative perception of reality will never be challenged and you can walk the Earth feeling morally superior to all those who have yet to see the light.
By: Rick on March 13, 2011

I'm looking for information of the new talk show I heard Sunday. It was Dennis Elliott and Matt Pencola. It's a good show especially as there is no interference by a third party, as is found on the KC & Carmen Show and others. Also will Handel on the Law, which they partly replaced Sunday, be given in its entirety elsewhere?
By: Houston Fitzgerald on April 22, 2013

Why is it still called the KC and Carmen show? Why aren't you calling it the KC and Ross show? I like Ross more than Carmen and I hope he permanently replaces the Carmen, but I still wonder what happened to Carmen. I hope she and her family are okay. Please let us know.
By: Barbara Cox on November 14, 2013

If at all possible,I would like to hear some good talk shows with Mark Levin,or other good Conservative speakers instead of seven hours of sports from 6:00pm-1:00am.Surely you can find something good to fit in,I`m sick of sports talk.
By: Harry on February 7, 2015

I missed something reported at 9:03 this morning about the Eden barber shop fiasco. Any way of rewinding? I am interested to know more about it.
By: Bruce Coburn on October 6, 2015

Please tell Monnie when she relates a story on former first lady, Mrs. Carter, her name is correctly pronounced "ROSE-ah-lynn" - not "RAHS-ah-ynn" Carter. She is not the only commentator who mispronounces Mrs. Carter's name, but please ask her to pronounce it correctly. Am also wondering - no other news announcer there ever gives out their name - except her. She gives her name out before and after every news bit she does. Why only her?
By: Barbara Moore on March 19, 2016

Enough of Glen Beck. I am not afraid of "controversy" as I love Rush and Sean Hannity. Glen is sick, twisted,and so phony. Please . Please. Get him off the air!!!!
By: Don on October 27, 2016

I love the talk show line-up during the day but at 6 I really enjoyed a break from politics with the Steve Gorman show which was a really well done Sports show. Now the replacement show America Now is just more politics except not as informative and just a rehash of the days talking points. Not up to the standards expected from WPTI. I am not listing after 6.
By: Dr. P on January 23, 2017

You guys have such great programming all day right up to 6PM. Is there nothing better you can air in that time slot. When 6:00 hits I can't change the station fast enough.
By: Mark on January 25, 2017

TERRIBLE LINEUP! MORNING THE CAPON, dismissed the talented comedienne Carmel, AND AFTER THE DANKARD. WHO IN HIS GOOD MIND WOULD ADV. THERE?
By: KURT MESSNER on March 2, 2017

I heard you mention Joanna Gaines face cream. Yes it's a scam. Unfortunately I was taken in by it as being reputable. I am not prone to getting involved in "too good to be true" advertising, but this I did. I'm disgusted by myself for falling for it. I also know that this is a purposeful scam. Please keep mentioning it, so more people will not fall for it. Thank you for bringing it to the public's attention. I love listening to this station and love the host line-up. Keep up the good work. Sincerely, a Trump deplorable
By: Jeanie Smith on June 23, 2017

Why do we need these Fox News reports updates on politics at every radio station break? Can you find something else to replace Fox News with?
By: Garry Smith on September 22, 2017

Saturday lineup, with the exception of Tim Moss (only one hour, should be more) and Joe Paps. Why isn't he on during the week? He makes more sense than most. And get rid of the Dr. P on Saturdays. It's a repeat every weekend. We need the conservative line-up during the week to offset the fake news of the left on most other stations. How about Joe Bags instead of Glen Beck.
By: gloria on December 7, 2017

you have been running the same traffic update from 3-12-20 about the early morning crash close to exit 141 in Alamance County.. you should cease that.. it confuses folks., and ver inaccurate
By: JOHN SNYDER on March 16, 2020

Anyway to beef up your signal strength? 94.5 in Spartanburg SC completely covers you up in Wilkes county!
By: Colby Cates on September 27, 2020

Is anyone at the station knowingly airing the Lutheran Hour on a Monday morning?!
By: Tim on October 4, 2021