WSRZ is an FM radio station broadcasting at 107.9 MHz. The station is licensed to Coral Cove, FL and is part of the Sarasota, FL radio market. The station broadcasts Classic Hits music programming and goes by the name "107.9 WSRZ" on the air with the slogan "Suncoast's Greatest Hits". WSRZ is owned by iHeartMedia. 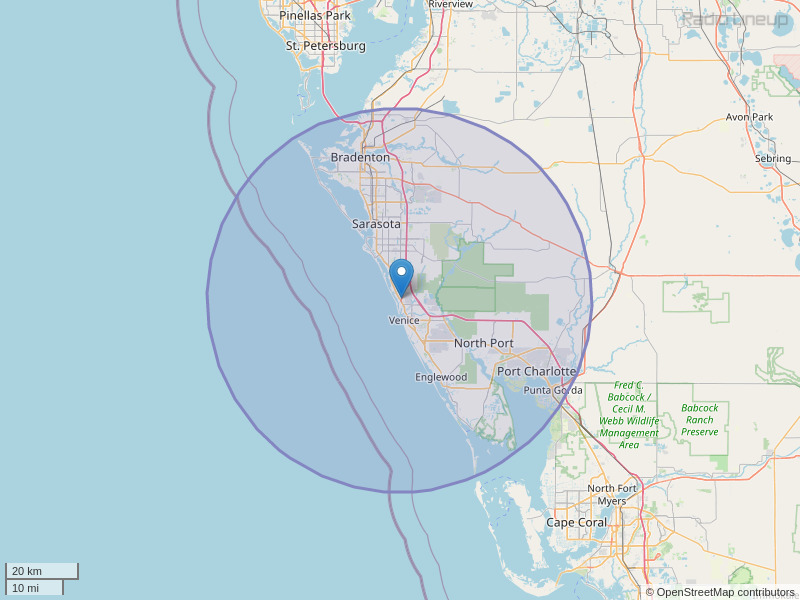 Hi....I am a very loyal listener...have been listening since David worked with Jelvis (JB) and Susan Gates ..will not write her real last name, because I am not sure if this will be posted for all to see or if this message will go to your office). I have been calling all morning....888-599-1079...continue to get a fast busy (usually indicating that something is wrong with phone lines)..and or....getting a recording that this number is no longer in service....Can you please tell me...has the number changed ? If so, what is the new number...Thanking You in Advance
By: Joyce Lupinacci on April 22, 2011

I love the morning show! Also,love the music,but could it be mixed up? There are so many songs not played. I would like to hear the 5th Dimension, Miami Sound Machine,Gloria E., Bryan Adams. Thanks much!
By: Jonnean on March 9, 2012

I want to know is 107.9 or 108.0 broadcasting classical oldies like Beethoven, Brahms, etc all day long? I know I've heard the classic's between 6 pm and 4 am. Now I can't seem to find the station. Thanks for answering me on email.
By: Frankie on June 5, 2014

Hello, I'm from Malaysia and I'm visiting my sister living here in ,Bradenton. Since I've arrived, I've been listening to your Station everyday . You have a good selection of songs, but... It'll be awesome to hear some of , Pink Floyd ; another Brick in the Wall Kansas, CCR .. ... I shall be attending the , WSRZ , dance at the white Buffalo , this 20th.. Hopefully I'll get to meet you both personally( David n Christina) Cheers . Just me , Susan Lovie xxoo
By: Susan Lovie on June 16, 2014

Where have all the great oldies that wsrz used to play when it was oldies 108? Plenty of classic hit stations in the area. Went away and came back to this even though the area has above normal numbers of baby boomers.
By: Jonathan Copeland on June 27, 2014

Why do you play the same songs EVERYDAY I have been coming to fl in the winter. and here the same songs . there are thousands of oldies songs to play please get some new disc. and exclude Elton John. I here his songs over and over. I am sure other listeneres would enjoy hearing different music. Is there a good 60's and 70's station. Haven't found one The DOVE plays the same songs everyday, also. Would be nice to hear a variety . thank you Darrell
By: Darrell Bible on June 24, 2015

Same songs over and over! Is there any possibility to expand the song library? As stated by someone else, lots of baby boomers in the area and adding more every week! How about a little more classic rock and roll? The same songs, played 3,4 and sometimes 5 times a day, are getting worn out. You have a great format and DJ's but the song library needs work! Thanks for listening!
By: Gary on November 12, 2015

I have been listening to Jones and Crane, show since I moved down here in 1991. I like to know what happened to David's partner, Crane? Sincerely yours a devoted listener.Garry.
By: Garry Breault on June 14, 2017

What happened to the 50s,60s, and70s music. You don,t play it anymore. I am very disappointed Mike and Linda Lauria.
By: Michael Lauria on December 8, 2017

Please play different songs. I quit listening for a while came back still the same songs.Would love to listen again. It sucks!
By: Cheryl Weiland on March 2, 2018

You played “Another one Bights the Dust” just now ( noon, 23 May ) . Please do not do it it again. The killer at Santa Fe High School uttered these lines as he massacred 10 people 18 May. Just wanted you to be aware of this so it does not happen again out of respect.
By: Paul Wfber on May 23, 2018

I listen often as do my dogs when I leave the house. I am however confused with the fact that the last 3 (and only) political ads I have heard were very right leaning if you get my drift. This would not be an issue for me except for the fact that I have not heard any "equal time" ads.... just wondering.
By: katherine kelly on October 23, 2018

Katherine, the ads are paid for and not subject to equal time. They pay the station and the station plays whatever the advertisers wants.
By: Rob on October 23, 2018

Will the first hour of Casey Kesam’s Top 40 be returning? Recently, the program has been starting on Sundays at 9:00 in the show’s second hour!
By: Joan on October 23, 2022