WWMM is a low-power FM radio station broadcasting at 107.5 MHz. The station is licensed to Collinsville, CT. 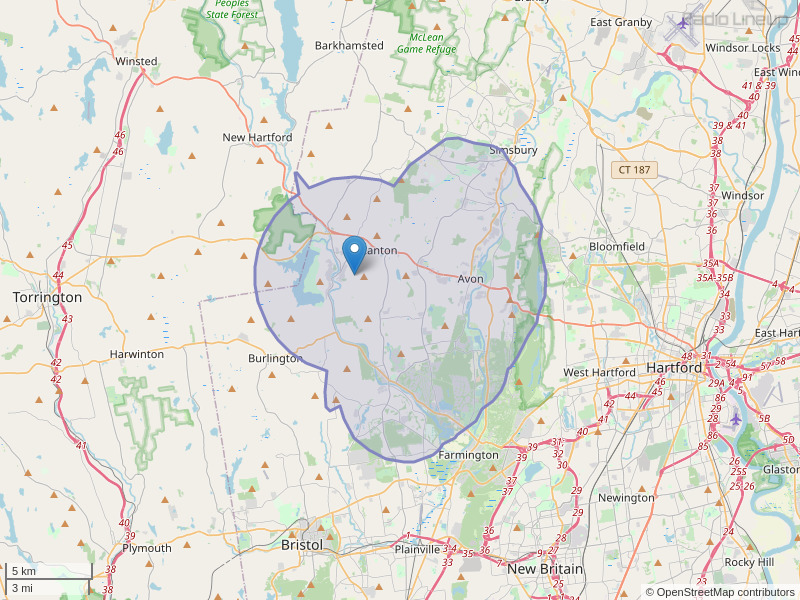 Could you add a few Tony Bennett and Frank Sinatra recordings to your good music?
By: Edie on December 6, 2016

I love your station! Not a fan of captain and tenille and Olivia newton john, but understand others do..
By: Karen on January 12, 2017

Stumbled on your station and we love it. Its been playing for days in the background as we prepare for Christmas. We live very close to your transmitter and probably you (as shown on the map). Thanks
By: Charlie Castonguay on December 23, 2017

I love your station but I can only pick it up from the Winsted Feed and Weed store on Rt 44 to the Dam on Rt 179. I wish I could get it all the way to the airport where I work. Could you work on that ? lol Thank you, Carole Peters
By: Carole Anne Peters on October 5, 2018

Great Station and many think I am the operator since I had my old station Radio Collinsville in town a while back, I've been getting lots of compliments on it but of course I have to admit it's not my show , wonder if you would need a guest DJ for spinning the hits and adding some fun commentary. I think people who listen, many of which are friends i made thru my old show would really get a kick out of it , as of course would i . it would be an honor to be on your show sometime. Best wishes with the station and happy it's doing so well. Tom Jacobson
By: Tom Jacobson on October 28, 2018

Hello there. Love, love, love that you are still playing Christmas music. Can you play it all winter?. Snow is coming and its so festive. Something about that Christmas music is so soothing......
By: A on January 8, 2019

Thank you! Makes my work commute so much more enjoyable!
By: Pattie on January 16, 2019

Love listening to the theme songs from ‘70’s tv shows. Wondering if you could play commercials from the ‘70’s as well? That would be awesome! 😊
By: Linda on February 12, 2019

Hi, I live in Canton and enjoy your station on the car radio. Is there a way I can get it online? for free? Would like to listen via my iPhone or iPad, just locally is fine. Thanks!
By: A Fan on June 21, 2019

Thanks to the driver from Mitchell Subaru, I now know of the existence of this radio station. It's such a hoot hearing long-forgotten songs, along with unforgettable songs from my high school years. Thank you, thank you, thank you.
By: Theresa on August 13, 2019

Hi, I am a Canton Selectman and am very excited about forming a new Arts Council. I love your radio station and think it would be a fit in the broad arts environment of Canton. If you are interested in joining us, please email me: g-bdeutsch@comcast.net. Hope to hear from you. Gail
By: Gail Deutsch on February 29, 2020