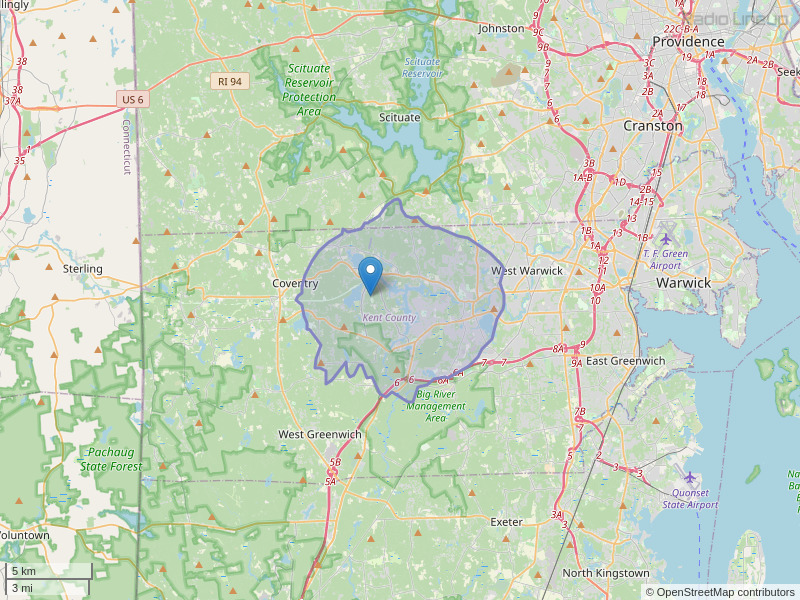 I came across a recording of some country music recorded in 1948 on a wire recoeder. I would be glad to send you a .mp3 of this. It is abbout 6 minutes long. It appears to be local musicians in the WWRI studio. Thanks, John
By: john barret on September 17, 2015

very weak reception in Warwick, and the same old standards
By: Joe on February 18, 2016

I just discovered this little station when I was in the Warwick Best Buy parking lot. This is an Excellent little fm station.. great sound Quality and good classic Rock music. I live in N. Providence , and unfortunately , I can't pick it up in that area. You really have a fantastic station... would you consider setting up a SIMILAR Lp fm station , in North Providence ?
By: William Lynch on February 19, 2016

Who do I contact in regards to the possibilities of working for your station as a advertising sales rep ? Have worked in Coventry/W.W in advertising as well as other products . I have a great base in area My first choice when listening to music classic rock . Read your ad KCDT ((2/24) If you are considering adding to your salesforce I would love to be considered. Will be reading my emails and hopefully a response would be awesome Thanks for your consideration. Jim Sartell
By: James sartell on February 26, 2016

I had checked this out The Marconi Broadcasting Foundation, and wanted to say hello to Michael & Dom, there are both long time friends and wish you guys well keep up the good work
By: Joeseph Macasa on March 1, 2016

Great station as an alternative to the "repeat rock" stations in the area. Don't fall into the same trap and play the same-old, same-old like the other stations do. There is 50+ years of good music out there, don't play the same 100 songs over and over. So far you are off to good start. The power could be boosted a bit. It is hard to receive the station on the far side of Warwick. Best Regards, Listening in West Warwick.
By: Chris on March 14, 2016

I love the station but it's hard to get good reception will that improve in the future?
By: KEN on March 16, 2016

About the only thing this joke of a station does is make it harder to hear WXTK 95.1 on Cape Cod from Newport. Thanks for nothing. A two tin cans and a string "radio station" won't last llong.
By: DIck Tuck on March 16, 2016

Another Low Power Non Commercial , Radio License ....Running Commercials...Then They Wonder Why They End Up Paying A Fine, & Have They License Revoked By The F.C.C....
By: Robert George FCC on March 23, 2016

I just knew it was low power, fades in and out constantly ....almost the same songs over and over same playlist day after day. another typical rock station, very disappointed, was hoping for something different , at least while I could listen in the Coventry area
By: Dan Frabisa on May 1, 2016

You're doing a great job....will be so pleased when you boost the power and I can listen all over the state. Glad to see you playing different rock...tired of the same old same old and constantly loading the car with CD's. Do you have plans to play some true blues.....Joe Bonamassa, Beth Hart etc....would be awesome and you would have a lifetime listener. Keep playing B sides, its the best undiscovered rock out there.....thanks 95.1
By: Deborah L on May 10, 2016

SAUGYS is proud to donate SAUGY FRANKFURTS to Sunday's 44th Annual Ski Show, enjoy the show, find Mark on HALL'S BEACH, 100% of proceeds will benefit the JPCA Association. SAUGYS since. 1869 "oldest Frankfurt in the country" Gluten free - NO MSG - 170 calories
By: Anonymous on August 4, 2016

Received a call the other day. The person calling said he was calling concerning advertising on WWRI .I said I thought the station was long gone, however he said no they are local and I have been listening since that day. Enjoy the music very much. Hello, John Parente, it's been quite some time since I heard your voice on radio. KEEP UP THE GOOD WORK love listening to 95.1. How long have you been on the air. By Lionel A. Nunes The Clyde Press - Printer
By: Lionel A. Nunes on August 9, 2016

The DJ on during the week from 3-7 is a joke. He talks all all over the songs and you can't understand him when he talks.
By: Gus Teller on October 13, 2016

Great station, cool format, Better than the commercial stations out there that don't give a dam about the community, its companies, and its residents. I don't understand why people write rude comments, are job is to be nice. This station rocks and even has some iconic names as DJs that have been on some pretty large station in New England. Keep up the amazing job.
By: JJ on October 26, 2016

Got turned on to this station by a friend. in fact, one show in particular really stood out hands down above any station I've ever listened to. Saturday night from 7-10pm called from the vault with Russ and roll. This show blew my socks off completely! The music alone is a nice change from stations like hjy wpro and (yuck) wbru. Russ and roll is someone I've never heard of locally at least, not sure if he was from another radio market, but he sounds nothing like the wash outs that I got tired of hearing with the same bathroom humor. Does just the rightt amount of talking between songs, and seems to know his $hit about music. His choices in music are things I haven't heard since I was a teen rocker, bringing back some great memories. I've heard alternate live tunes, covers and solo projects that left me stunned. Not 100% if it's his own choices or the station manager, but thsi show has me hooked better than anything I've had on sirrius or pandora. Wish it was on more than one night seeing as its tough sometimes, or at least have a replay. But as longg as the show keeps up like the way I've heard it, I'll be locked in as a listener for sure!
By: Ron on January 26, 2017

there was a show on saturday nights my wife and i use to love it! russ and roll...we listen every saturday night....but this weekend it wasnt on...whats going on?????
By: john nugent on April 5, 2018

Anybody have any old pictures of the inside wwri when it was on main st. in West Warwick. Now wpvd. When I was a teen I used to visit the dj's at the station, wish I would have taken photo's of the inside. I remember the teletype machine for AP news. and the Gates 1000 watt transmitter.
By: Daniel Roy on February 18, 2019