WZBA is an FM radio station broadcasting at 100.7 MHz. The station is licensed to Westminster, MD and is part of the Baltimore, MD radio market. The station broadcasts Classic Rock music programming and goes by the name "100.7 The Bay" on the air. WZBA is owned by Times-Shamrock Communications. 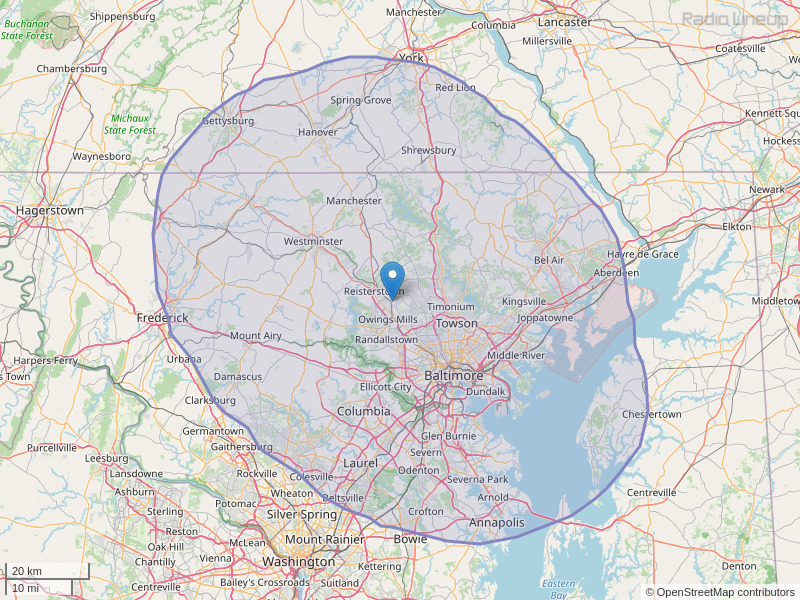 I am tired of that other radio station 98 r.... They play the same songs all day. The only difference is the radio personality that is on the air. I m not kidding. Your station is my station now.
By: elle fabre on October 14, 2014

Stephcynie East Coast Tour November 1-5, 2015 FOR IMMEDIATE RELEASE October 27, 2015 Contact: Cynthia@stephcynie.com US: (832) 226-1403 EPK: www.reverbnation.com/rpk/stephcynie [Nashville, TN] – STEPHCYNIE performs live on the East Coast starting this Sunday, November 1, 2015, through Thursday, November 7, 2015. This Southern Songbird mesmerizes with a smoky, enchanting tone and a unique vibrato. This tour features Stephcynie & The Voice Season 6 contestant, Melany Watson, and local artist including, Victoria Vox, Dave Root and Etta Mae. Stephcynie releases her first full length album in November, entitled “Mr. Edwards.” Check out her EP, “Contagious Love” available on I-tunes. LIVE SHOWS Concert Tour Dates WOOLIVE | VIENNA, VA | NOVEMBER 1, 2015 | 8:00PM THE POTTER’S HOUSE | WASHINGTON, D.C. | NOVEMBER 2, 2015 | 7:00PM THE SEED | LANCASTER, PA | NOVEMBER 3, 2015 | 5:00PM THE SHRINE | NEW YORK, NY | NOVEMBER 5, 2015 | 9:00PM PRIVATE EVENT | LE POISSEN ROUGE | NEW YORK, NY | NOVEMBER 7, 2015 About Stephcynie • "Her voice is like a breath of fresh air, her artistry is the epitome of self-expression with no boundaries. The industry is steadily becoming more artistic/creative driven and she is ahead of the curve." - Cee Barret, Artist Management, BMI • “When Stephcynie asks you to play a show, you’ve got to say yes!” -DYNAMO • "What's good in music? Stephcynie" - Justin Dwayne Joseph, Editorial Manager at BET • For all things Stephcynie go to Stephcynie.com and be sure to check her out on YouTube.
By: Cynthia on October 28, 2015

My daughter MARY BYRD BROWN - a local popular singer/song writer has been suffering from Lyme for 25 yrs. She is now (due to the Lyme) faced with major surgery including grafts costing up to $40K. I was wondering if it would be possible to mention this on air encouraging folks to go to her Go Fund Me site with the hopes of folks willing to donate. Thank you, June Brown
By: June Brown on February 24, 2020