Fresno's Next Generation of News Talk

KALZ is an FM radio station broadcasting at 96.7 MHz. The station is licensed to Fowler, CA and is part of the Fresno, CA radio market. The station broadcasts News/Talk programming and goes by the name "Power Talk 96.7" on the air with the slogan "Fresno's Next Generation of News Talk". KALZ is owned by iHeartMedia. 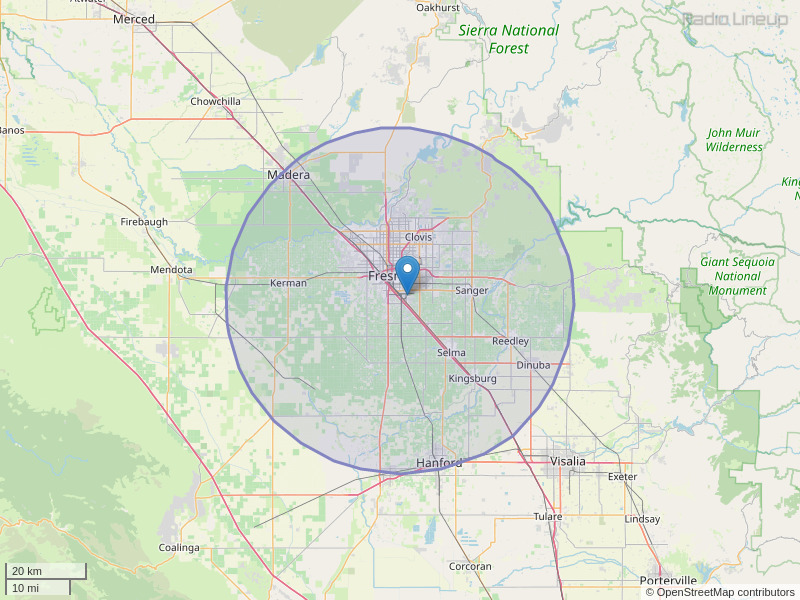 Bill Manders claims his wife say's that he's nuts. From listening to him I tend to agree. He loves to brag that he throws hardballs but he runs when someone wants to return the favor and, as he did today, hangs up on them to hide. I will continue to listen to Beck, Hannity and Rush but I'll never listen to your station when Manders in on the air, and will go out of my way not to support your advertisers. The lady today started to say..If I were the mayor I wouldn't come on your show either which caused him to cut her off the air. I also hope Vidak won't come on his show and I hope Devin Nunes won't return because of the way he recently so rudely treated him when he was a guest on the show. He brags about how well the ratings are but I know several friends, like myself, that change stations at 3:00 also. Management shouldn't have to wonder as to why so many people don't want to be on his show but will talk to your competitors on their talk shows. Who hired this guy?
By: Former Listener on June 5, 2013

I agree about the riff between Manders & Devin Nunes. But that wouldn't stop me from listening. Bill Manders is good, and I will continue to listen. I am so happy "Powertalk 96.7FM" came to the Valley. Keep up the good work.
By: James L. Georges on September 27, 2013

Love Bill Manders. He tells it like it is, even if it hurts. Truth is truth and those who cannot stand to hear the truth need not listen. Keep living in denial. As far as Obama's photo up, that's all it was....a convenient stop on his way to those beautiful water guzzling golf courses and the meaningless meetings with VIPs. Nothing would please the regressives who like to call themselves progressives more than to have our ag dominance in the world collapse. Sure, the farmers may be forced to charge $3.00 for a peach or a tomato, but the regressives are itching to flood our market further with foreign produce and fruit from the third world countries, yes, like Mexico and Chile. I went shopping yesterday for veggies in a well known store and practically everything was from out of our country. Hardly anything was from USA, so I left with a couple of items that read USA and I put down all that was foreign....I read labels and I advise people around me to do so also. People do listen. There are grove after grove of avocados from the Central Coast down to Santa Barbara and beyond, but all the avocados I checked in three grocery stores were from Mexico and other foreign countries. I have had enough of that. I don't want that crappy stuff that comes from foreign countries...I want local and I want American. So, carry on, Bill Manders. We appreciate you.
By: Sofie Kellogg on February 20, 2014

Who is speaking for such a long time on troglodyte ultra-conservative issues that I consider so--last millennium. * I listened to some "Ray-Appleton" sort of guy who was taking hits at Barack Obama, The Power of The People and taking swings at The Affordable Care Act and tangentially jibing democratic and progressive means which have instituted safety-net programs to help the poor, disadvantaged and disabled the opportunity to have their own personal version of the "AMERICAN DREAM" which is usually used to describe a life with enough resources with some vacation-time, a healthcare plan and a HOME with a 30 year mortgage and possibly a relationship with some friends added to the mix and/or children all living together. This Dream allow them to socialize with people of a similar socio-economic background and when asked at a party--what do you do--Can actually answer the question......most disabled people and many poor folks cannot answer this question because they are living on Federal, State-Enhanced entitlements and usually decline to state since many people (who pay income taxes) have been PITTED against the POOR by The Tea Party Republicans and other misguided people like them. Im not sure why we have become more or less more greedy as a nation if you count by registered voters who actually voted on NOV 4 2014; I do know that we need to reknit our country back into the loving quilt that it used to be in 1964 een though it was the year of the Civil Rights Act and Riots throughout the South--it was the rebirth of Pop music through Soul--MO-TOWN hits warmed and enchanted the country to be progressive and accepting and decent--there were no computers and high-tech and yes, people actually read newspapers and books made from paper whereby you turn the pages and families normally ate dinner with each other every night at 6PM and watched Walter Cronkite deliver the News. Most families made less than 9,000.00 a year--their were more middle class voters per-capita and vehicles cost 3200.00 and a gallon of milk was .32 cents and the cost of a childs entire education from K-12 and four years of college or trade school was 1800.00. Women wore dresses and people didn't talk back to their parents or were slapped HARD on the cheek. Men went to work in offices with tapered, fitted SHARKSKIN-suits with neat thin silk ties and decent shoes like WingTips with appropriate hosiery and Hats and when the weather would be cold, they would add spats, Top Coats, Galloshes, and retractible Black--never colored--umbrellas as no one ever thought of going to work "casual" and most went to church--if we would just bring back the three.... 1. Family eating together at Dinner everyday where children interact in the How Was Your Day with their biological parents. 2. People dressing for success, working and staying dressed for more success each and every day and being helpful to society by working and paying taxes. 3. Regular Church Attendance with The entire family on most Sundays and whereby children get to ask about God, Society and why do bad things happen. Just a thought--I now figured out who has stolen what was FOX-classic Rock station--probably bought by the Tea Party Republicans--WHY ELSE WOULD GLENN BECK be speaking. JUST SO YOU KNOW, PEOPLE....Glen Beck...ISN'T!
By: KENDRICK VAN GERPEN CMP on December 2, 2014

I called into Guarmo's show last night while driving back from LA and appreciated the opportunity to voice my opinion on the NFL that was being discussed. After I hung up, other callers made some comments that I felt I might address. First, Guarmo wanted to know what to do if everyone sits down during the National Anthem. I say, the great thing about America is that we are free to sit, kneel or stand as guaranteed by the constitution. It is the freedom to voice descent that makes America so great and is what our military protects. But please do your homework. Don't mislead your listeners based on the racist manipulation of our current President. Ask Trump why he is afraid to challenge new-Nazi's who were violent in Virginia and instead attack the NFL over the unfair treatment of Black Americans by rogue police officers. When a white man is allowed to walk into a Pizza place with an assault rifle and walk out alive and a black motorist is shot because he might be reaching for a gun and the police officer was afraid and it's caught on camera repeatedly. And then the officers are found not guilty....anyone can see that there is a big problem here. And unfortunately, our children can smell hypocrisy without the need for better schooling. The refusal of talk show hosts like Guarmo to act fairly and honestly to uphold the constitution that states that "all men are created equal" leads to disillusionment among our kids and one can expect that they are justified in not respecting the flag or other rituals and symbols meant to bind us together as a people. Finally, I represented myself as a progressive and I was taken by the fact that Guarmo, when talking to a caller after me, referred to progressives as "Them" I am an American and not a "Them"...the us vs them mentally is not what are founding fathers intended, when they began with, "WE, the people..." And yes, the flag is a symbol, often made of cloth, that represents the very ideals laid out in the US Constitution and Declaration of Independence. But it is a symbol and nothing more, just as a cross is not Christ. And the Nazi symbol has a meaning that goes directly against our Constitution and our current President's silence was very telling and should be a warning for any talk show host with a Spanish first name like Guarmo, that no matter how hard you try to be a member of the conservative club and support those like Trump, they will always see you as "different" and not Alt-right enough...it's just in your DNA...so deal with it!
By: Phil Gaddy on September 27, 2017