KFBK is an FM radio station broadcasting at 93.1 MHz. The station is licensed to Pollock Pines, CA and is part of the Sacramento, CA radio market. The station broadcasts News/Talk programming and goes by the name "NewsRadio KFBK" on the air with the slogan "Sacramento's News, Weather and Traffic Station". KFBK is owned by iHeartMedia. 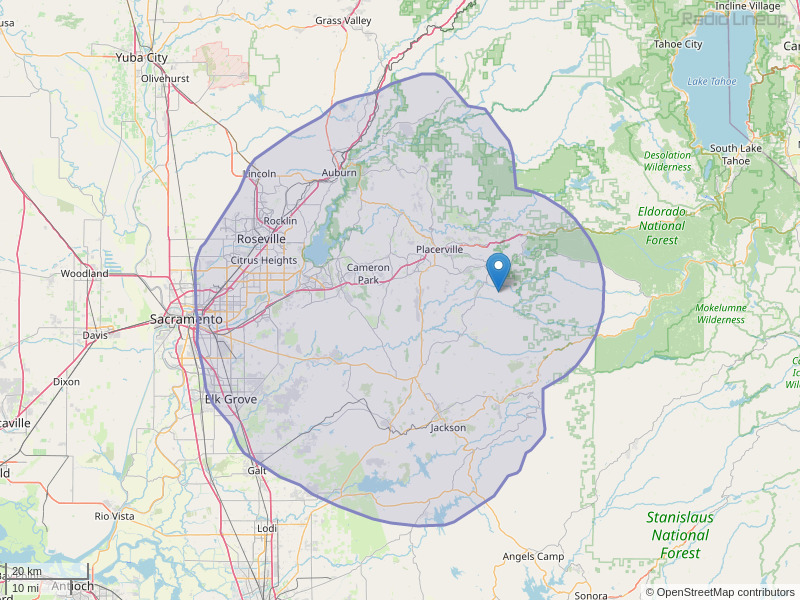 I'm lisening on an old FM radio. Where is the playlist for what you are playing? I can't stream music on my old CPUs. Not everybody has a computer or can keep up with the expenses of technology; don't forget us. Clear channel - nice concept but like so much else, leaving a lot of citizens in the dust. I want to buy a song: what's the name, who's the artist. Wonder why CD's and even DVD's aren't selling? Too profit driven - not sharing enought. I find music these days on the DVD credits.
By: V L Winter on July 19, 2011

I, among many others are big fans of Art Bell"s show "Midnight in the Desert." Starting October 1st that show will have XDS and I and many others would love it if you would carry Art's show. The other show, "Coast to Coast" has gone downhill so bad I don't listed anymore. Please consider playing Art's show. Thank you
By: Cathy O'Brien on September 22, 2015

Cathy O'Brien said IT all; C2C is no longer exciting, same as many. We don't need another same-o same-o radio station!!!
By: bob smith on February 1, 2016

How about the News minus your commentary about how stupid Republicans are. It would be refreshing to simply hear the news. Yes many Americans are uninformed, but you seem to really hate more on one side than the other. Get out of your bubble. You might find some of us guns and God folks are smarter than you think. Bruce....
By: Paul Perkins on December 21, 2016

Do you take quest speakers? I represent the Spiritual Hobo of NOFM. World known and has next book out. Peniel The Plot to Keep Mankind Third-Eye Blind We are currently in Pollick Pines distributing some of our books. You can contact me at email above or call 318-290-4578 Thank you,. NOFM
By: Lisa Pearson on July 24, 2018

The girl who reads the news at night needs to go. Her Ebonic style of speaking and sharp pronunciation is so annoying that every time I hear her voice, I change the station. Also, please for the love of God and all that is holy, get rid of the University of Phoenix commercial...!
By: Mike Litoris on November 14, 2018

The voice who does your weather sucks, why was the format changed???? It's not local anymore, way to go!! You now sound like every other station across the nation.
By: Richard Reed on April 29, 2019

Will you ever do anything about the Mexican station that bleeds over your air (93.1). It is very disconcerting and makes it hard to listen to your station.we are part timers here and are not happy with this.
By: Carroll stewart on July 21, 2019

I love KFBK FM. It has everything I want and more. Your the very best. Thank you. Mary
By: Mary Almeida on July 31, 2019

I was told that your station may have reported of a City pool employee that was attacked over the weekend. Actual date was 8/3/19 at 1:07pm. I would appreciate anything that you may have on this story.
By: Lindsey C Wrightsman on August 7, 2019

Hey.. when did you guys start pushing the extremist far right neoconservative agenda? Don't you know that right wing extremists, or domestic terrorists, are the biggest threat in America according to all the agencies? The misinformation and blatant lies are disturbing.. what are you trying to start?
By: Joe on October 7, 2020

I've only been listening off and on for a few months, but I've truly enjoyed listening to the morning news with Sam, Cristina and Albert. Keeping it real and keeping listeners engaged with their great vibe and humor delivers great energy with the morning cup. Has KFBK even considered doing a live broadcast by streaming the show over your website? Would love to see that happen one day. Thanks!
By: Sergio on February 10, 2021

I have listened to your morning broadcasts with Sam Shane and Cristina Mendonsa many times. I never write in like this but wanted to commend KFBK radio and those two reporters for the balanced reporting they do. It is refreshing to not hear such biased news reporting on stories other programs have. I feel like they give both political parties angle on stories.... it feels like news was back in the 60's and 70's....news you could trust. I will admit that Sam and Cristina both seem to view things more conservatively... which may be why I enjoy and believe their takes on current stories. Thanks again for having a great show to listen to on my drive time to work.
By: Bob M. on April 6, 2021