KMLR is an FM radio station broadcasting at 106.3 MHz. The station is licensed to Gonzales, TX and is part of the San Antonio, TX radio market. The station broadcasts Christian Contemporary music programming and goes by the name "K-Love 106.3" on the air. KMLR is owned by Educational Media Foundation. 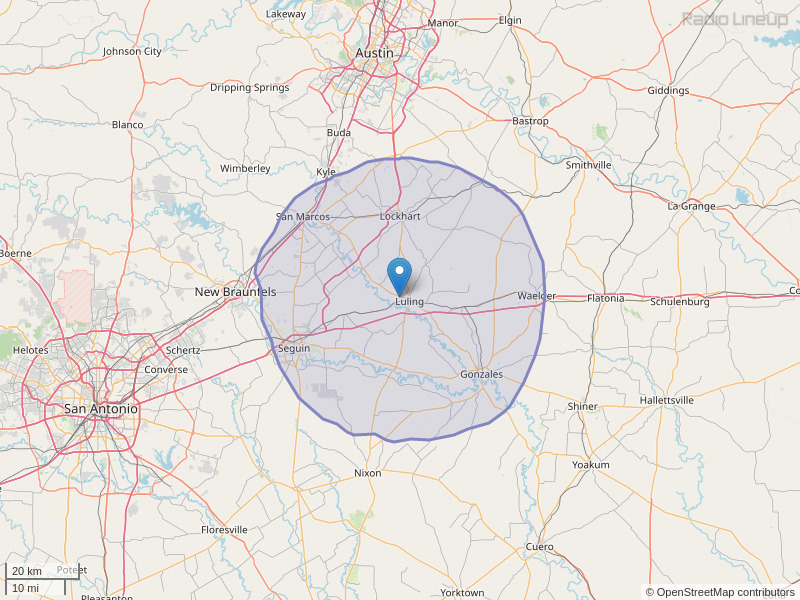 Love this staion please play toby mac some i would like to hear; favorite song, me without you, dont want to loose my soul, and made for me.
By: angla taylor on October 26, 2014

I was listening to the broadcast, at 1720, 8/26, your broadcaster was incredibly out of line. His thinking about how much he knows about the Mormon religion is offensive and ignorant at best. I'm offended for my Mormon friends. I'm calling for him to be fired and give the local south Texas audience a massive apology for the hurtful and ignorant statements he made against my Mormon friends. Who would agree that calling my Mormon friends non Christians because they last to Adam , the father of all humans? Such an ignorant assessment of what Mormon truly believe. As far as I'm concerned, 106.3 is dead to me and my other non Mormon friends because of this until there is repercussions made of this
By: Steven A Nihipali on August 26, 2016

Grateful to have a port in the storm..a safe station on the dial. I came on trying to find maybe where songs played would be listed, cause I loved a song played around 11:30am and I think it was Newsboys...who I really hope you play more of...and Trip Lee, Tedashi, Lecrae, and Reach Records artists and many other Christian Hip Hop artists with greatttttt lyrics about the Lord and this Christian life.
By: Q on September 6, 2017

I was listening today, Sep 6th just before 1140 and station was not clear but preacher was on, can you tell me who that was. Station was 106.3 and I was on the west side of San Antonio.
By: Joe Carr on September 6, 2018

I have never heard a message so demeaning concerning an unborn child (miscarriage). By someone on your station broadcast. How can a person be so out of touch with life. The Bible clearly says that God new us from the very foundation of this world and in our Mothers womb we were knit and the our days were fashioned. Psalm 139:16. We as believers are against abortion and for a "Minister" of God coming on the air waves telling woman to get over it if they lost a an unborn "child" by she lost it by miscarriage bc lt was never a person. Is he serious.
By: Robert Chavez on December 3, 2018

Hello today at around 430 I was listening to 106.3 on my way home and there was a Pastor Mike ?? I cannot rememebr his last name. And I was hoping you could give me that information.
By: Cynthia Plata on February 8, 2019

I’m listening to your station 106.3 today 8/30 at 4pm and how can a Christian station be so blinded by the fact that the commentator is supporting Trump and that he surrounds himself with “godly people”. Trump is the most unchristian man to serve as our president and that’s a fact! I will no longer listen to your station.
By: Tess on August 30, 2020