KSBJ is an FM non-commercial radio station broadcasting at 89.3 MHz. The station is licensed to Humble, TX and is part of the Houston-Galveston, TX radio market. 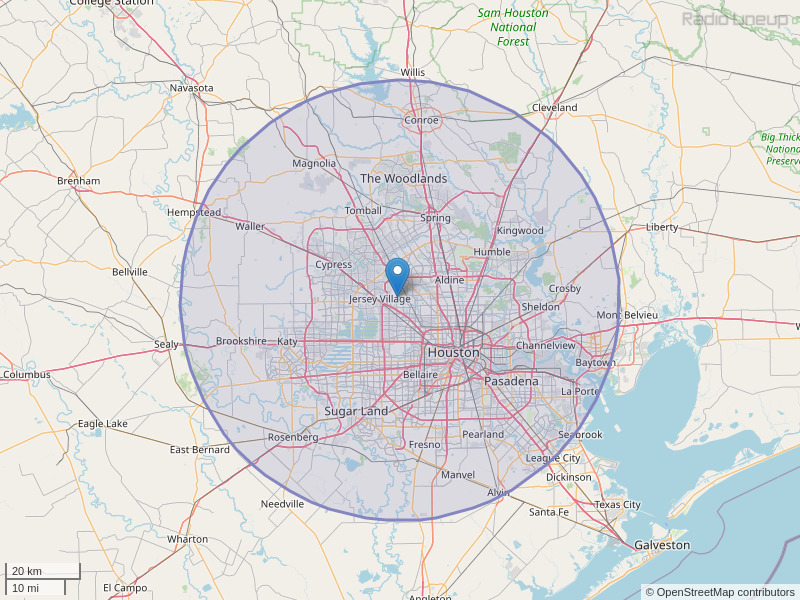 You all play the best mix with excellent rotation at the busiest times of the day. Thanks to the DJ's and staff! An excellent respite!
By: Steven.falkenstein on September 19, 2015

K-Love (stylized K-LOVE) is a contemporary Christian music radio programming service in the United States operated by the Educational Media Foundation. As of March 2013, the network's programming is simulcast on over 440 FM stations and translators in 47 states.[1] K-LOVE has about 12 million listeners each week in cities including Chicago, Denver, Des Moines, Nashville, New York City, Philadelphia, Phoenix, Sacramento, San Antonio, San Diego, and Seattle.[2] It is also the sixth-most online-streamed station in the world In 2001, Christian radio personality John Rivers, along with his wife Sherry, became the K-Love Morning Show hosts, and broadcast from their ranch in Texas.[32] The K-Love Morning Show became popular and continued with Jon and Sherry for seven years until March 28, 2009, when it was announced that Jon and Sherry Rivers would no longer be hosting the morning show, due to family issues.[33] Host Lisa Williams assumed the duties of hosting the program, and was later joined by Eric Allen.[33] Other DJs also joined the K-LOVE team during this time such as Scott Smith[34] and Kelli Caldwell, which eventually became the afternoon show.[35] On October 1, 2007, Mike Novak was named CEO and President of EMF, K-Love, and Air1, replacing Dick Jenkins,[36] and as a result stopped having a regular on-air shift. the 2010s K-Love's brand power expanded. In July 2010, the network a partnership with MacDonald Motorsports #81 car and Michael McDowell in the NASCAR Nationwide Series.[46] Then in March 2012, K-LOVE announced it will be the primary sponsor on two-time NHRA Full Throttle Drag Racing Series champ Tony Pedregon's Funny Car for 12 of the final 20 races of the season In July 2011, K-Love made changes to its on-air staff: Amanda Carroll joined the team in the mid-morning time slot,[49] and the network announced that Lisa Williams and Eric Allen would no longer be hosting the K-Love Morning Show.[50] JD Chandler took their place until the K-Love Morning Show with Craig, Amy, and Kankelfritz acquired the spot in November 2011 In December 2013, K-Love presented a Christmas music special for the cable network Up, K-Love Music City Christmas. The special was hosted by Candace Cameron Bure, and featured performances of Christmas-themed music by various contemporary Christian musicians.[52] K-LOVE also operates an online radio stream, K-LOVE France which broadcasts a mix of English and French Christian music.
By: Aaron Specialneeds on May 17, 2016

Ksbj is not relaying klov it is a local station and it also has many translators
By: Anonymous on May 21, 2018

LOVE YOURSELF FIRST DOMESTIC VIOLENCE 5K RUN/WALK FOR RELEASE: October 7, 2019 Media Contact: Cherlyn Latham, houstonspeakout@gmail.com We are pleased to announce that Speak Out Inc. (SPO) is hosting its first LOVE YOURSELF FIRST Domestic Violence 5K Run/Walk on October 19, 2019 at Buffalo Run Park, 1122 Buffalo Run, Missouri City, TX 77498. Registration is at 8:00 AM and the actual event starts at 9:00 AM. Speak Out Inc. is nonprofit 501(c)(3) that originated in Houston TX. We officially started June 2018 and has successfully reached to-date 8,050 individuals through several media outlets. We were originally known for the play “SPEAK OUT” that dealt with domestic violence. The Founder and CEO, Cherlyn Latham is an overcomer of domestic abuse/violence. From past relationships, she has encountered physical, mental, spiritual, and psychological abuse. Through her experience and interviewing others like her, she developed the play “SPEAK OUT”. Every time the play was shown it was a sellout. Leaving people with the understanding and awareness of this topic. According to the National Coalition Against Domestic Violence (NCADV), “1 in 4 women and 1 in 9 men experience severe intimate partner physical violence, intimate partner contact sexual violence, and/or intimate partner stalking with impacts such as injury, fearfulness, post-traumatic stress disorder, use of victim services, contraction of sexually transmitted diseases, etc. This is commonly considered “domestic violence.” We are requesting your presence at our Domestic Violence 5K Run/Walk. On the day of this event there will be vendors, brief messages from those who have overcome, entertainment, food trucks, and a host of other surprise attractions. We anticipate local dignitaries to attend as well. If you are interested in participating in the walk, go to www.speakoutinc.org to register. You may also go to: https://runsignup.com/Race/TX/MISSOURICITY/SPEAKOUTINCDomesticViolence5KWalkRun2019, https://www.raceentry.com/races/speak-out-inc-domestic-violence-5k walkrun/2019/register, https://www.eventbrite.com/e/love-yourself-first-domestic-violence-5k-runwalk-tickets-71721074665, or go to the website as well to register for this event. About Speak Out Incorporated (SPO) Our mission is to bring awareness and education to those who are conquering domestic violence in Houston and surrounding communities. And, our vision is to bring healing and hope to those that are hurting. SPO is for men, women, and teens who have been mishandled through abuse and/violence of a love one. Every Second Sunday we go faith-based facilities to bring awareness. We have attended six churches in 2019 and have reached approximately 250 people. We are going out to the street and asking the community various questions on domestic abuse/violence, survivorship groups, etc. The messages are spread via Twitter, Instagram, Facebook, website, internet radio shows, and old fashion word of mouth. SPO had the pleasure in presenting in a Women’s Conference in New Orleans Louisiana. Spirit Internet Radio has graciously given Speak Out Inc. one free night per month to discuss the subject matter at hand. We recently signed a contract with TWC as a vendor for employment placement and readiness. SPO has partnered with Dress for Success, Career Gear Houston, Motivation Point Resource Center, and others to get the word out to the communities. Our goal is to teach others How to Love Yourself First, before you can love someone else. Ultimately, have affiliate chapters around the globe. Contact Information: Contact: Cherlyn K. Latham, MA, BA Speak Out Inc. Founder/CEO Mailing: 7602 Del Glen Lane, Houston TX 77072 Number: 832-785-4471 Email: houstonspeakout@gmail.com Website: www.speakoutinc.org Facebook: www.facebook.com/houstonspeakout
By: CHERLYN LATHAM on October 8, 2019

NEWS TIP The woman below, Patty Uck-Sierra' s dog RICKY BOBBY a brindle Pitt went missing the 12th of Nov. Her pleas have reached a huge number of people in the community and they helped raise $600 dollars. The money was to bring in pet tracker Paula Welch, whose dog Nugget gained recognition when he found Frank the missing Bulldog after the Hurricanes several years ago. Paula Welch is a retired Texas Detective and is traveling 5 1/2 hours from Eden to come help find Ricky Bobby. Tonight Patty received a call from a woman saying she had Ricky Bobby and had a picture of him to confirm it. When Patty raced over to the woman’s home, the woman said a lady drove up to her while she waiting with Ricky Bobby, she was a light skinned black woman in a Silver car, and she took Ricky Bobby just moments before her true owner Patty arrived. Patty is devastated, Ricky Bobby is a therapy dog with an interesting back story. The community in Humble has shown such an outpouring of support as well as the on line community of lost and found pet helpers, that a story on the news might help bet Ricky Bobby back. PLEASE PLEASE CONSIDER RUNNING it.... we need a happy ending to this as a community. This woman STOLE RICKY BOBBY and he needs to be returned. Your RADIO station could be the CATALYST that makes it happen! ON FACEBOOK RICKY BOBBY MISSING DOG Patty Uck-Sierra is feeling devastated with Jose Sierra. November 13 at 4:48 PM · LOST DOG ***11/12/19 Cypresswood Pointe community, Humble, TX 77338*** I would be lying if I said I was ok... Ricky Bobby has been missing for 24 hrs now in freezing temperatures. He isn’t just a dog to us. He’s family. Ricky B has been a therapy dog, sago palm poisoning survivor, and simply put a “good dog”. Please please please if anyone has him or knows of someone who has him please have them call me. 407-361-1888.
By: Anonymous on November 16, 2019