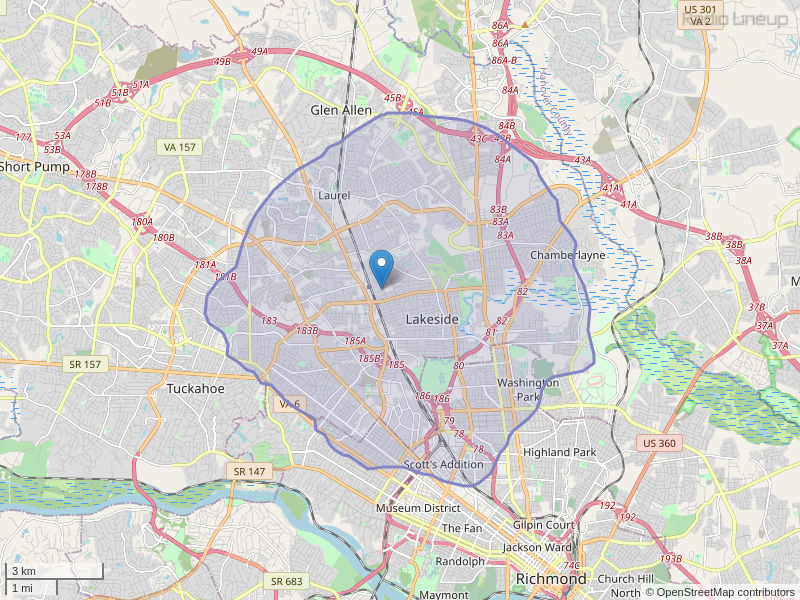 I'm a new listener to The Bridge. I found it by accident, as I was channel surfing in my car. I LOVE, LOVE, LOVE the music that is played. I'm so tired of the same stuff being played on other stations. I even listen to this in the morning instead of NPR lately to put myself in a better mood and get me going for the day. This is a breath of fresh air for radio in Richmond. Thanks!
By: Leah Bolling on December 27, 2017

Same with me, found it by accident looking for an alternative station out of Cville that I had heard before. THANK YOU for playing "deep cuts", alternative bands, stuff I've never heard before! I do not pay for satellite radio and get so sick of hearing the same 30 songs on top 40 radio and the same 90s stuff on XL102. So happy The Bridge is on in Richmond! I've been telling all my friends. Looking for a website or FB page but haven't found one...and would be happy to donate to keep you on the air!
By: Erin Bailey on January 17, 2018

Agree with both. What Richmond was sorely missing. Not sure if the signal reaches U of R and the Far West End. If it does and people are made aware of the station, the number of listeners ought to increase significantly. I sincerely hope Big Deal Productions is able to sustain the station.
By: Anonymous on January 21, 2018

I can't get enough of this station! Reminds me of the Annapolis Alt Rock station (WHFS/99.1) from the 80's & 90's. Where else can you hear The Stuts and Johnny Cash at the same station? What a breath of fresh air! Please set up a site soon so support can be provided by listeners.
By: Anonymous on January 26, 2018

Awesome! Found by accident while scanning the band. Wow. About time for a station with a playlist like this. Speaking of which, is there a playlist online as I'm not familiar with a lot of the music. I guess I'm not in the usual demographic!
By: Joe on February 14, 2018

This station is awesome. I just spent a bit on google trying to find their online presence. This music is a breath of fresh air compared to the same monotonous garbage on the radio today. I WANT a station where I hear a new song every day. It's OK for me to not like everything a station plays. You guys keep it up, if you need internet I can find a way to beam you some, keep real music and the practice of not brainwashing you listeners a priority. So glad I found this station.
By: Joey Gibson on February 25, 2018

Like everyone else, stumbled onto this - does remind of HFS as well. Check out listener supported radio out of Charlottesville, WNRN at 88.5
By: Scott on March 1, 2018

Loved this station but it seems to have been off the last couple of days.:( hope it's not forever??
By: Kristen Mullins on March 12, 2018

What a great station the bridge is! I'm sure they have a limited budget but it'll be nice when they get the RDS setup. Keep it up we need you out here!
By: Ronald Tomlinson on March 13, 2018

THIS IS THE BEST STATION! Found on accident, and am hooked. It goes in and out with a religious station, but it’s worth the occasional interruption. Thank you!
By: Amanda on March 29, 2018

ME TOO my daughter was in my car and left it there while scanning. been listening ever since. I go back and forth from Richmond to chesterfield and doesn't pick up well all the way. LOVE IT. HOPE U GET MORE DISTANCE/POWER
By: linda huckstep on April 11, 2018

Giving my age away here, this is the best station since Progressive am 1590 WGOE (69-81) We now have five independent LPS in Richmond. That is all I listen to. We have had some very good stations in Richmond, but corporate radio destroyed them. As always the people know best. I really love the bridge, best of luck. P.S. I hope RDS will be implemented soon.
By: Ronnie T. on April 18, 2018

I discovered this station today, they were playing Siouxie and the Banshees, haven’t heard that on the radio since the late great WVGO in the early 90s. Totally agree that corporate rock has destroyed radio with the same 50 songs over and over, if I hear Don’t Stop Believin’ by Journey one more time, I will have a meltdown. Also checkout Boomtown at 92.9.
By: John G. on April 25, 2018

I love the music, but it doesn't take me home to New Kent. It fades out around Highland Springs. I hope that y'all get a stronger signal soon... I love the variety of music.
By: V. Lane on May 31, 2018

Something has apparently happen as the signal is quite weak here in the Westend (Three Chopt Road area) Signal is usually strong out here but tonight it's weak. It only seems to get like this when I storm rolls thru the area.This is such a good station with the type of music that you really find on Indie stations and college radio. It such a shame that there is no way to contact anyone personally so that they can know that there is some sort of technical issue. Please don't let this station fall thru the cracks.
By: Sanford Bernstein on July 10, 2018

Finally, a radio station worth listening to. Thank you!
By: Mark Atkins on July 17, 2018

Thank you! Love the mix of music and lack of talking
By: Anonymous on August 9, 2018

I was a big fan of HFS before the format change. Then I found WNRN. I thought I was happy with radio again. Ii then found The Tide but i realize now WBDB was what I was waiting for. Anyone from WBDB from reading this? Create a stream. You have listeners.
By: Snufleupagus on October 28, 2018