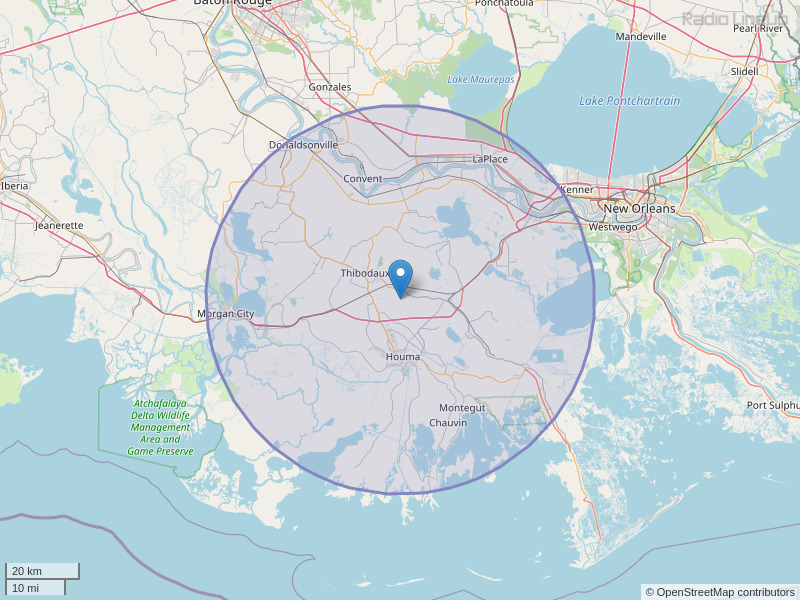 I wanted to write and tell you that I just discovered your station I am loving it I love classic country music I hope that you will be around along time I hope that you will get Rick Jackson's country hall of fame and Randy Owen's gold Country soon Thank you for a great station
By: JANIE WELLS on January 27, 2013

Just love this radio station
By: Brenda Migues on January 28, 2013

i love listening to this station, it brings back some good memories,this is the onlystation i listen to ,LOVE IT,FROM DES ALLEMANDS.
By: loraine hebert on January 30, 2013

On our way back from Florida, to Morgan City, we were scanning stations. We were so happy to find you. Now Gumbo is one of our favorite stations. Go Gumbo...
By: Debbie G. on February 19, 2013

I am writing your radio station from Seattle Washington in hopes that you'll help me on a quest to find a guy I met back in January in Whistler, Canada. His first name is Jordan and was traveling with 8 buddies. He is 25, from the outskirts of New Orleans, and I believe works at one of the local refineries. After showing me four forms of ID you'd think I'd remember a last name but all I can say is I believe it to be French. Stupid me, I didn't ask for a phone number either since I assumed I'd never see him again. Maybe it was his ridiculously good looks, the irresistible Louisiana accent, or the southern charm that has me kicking myself now. Although I realize this is a stretch and possibly walking a thin line of crazy stalker and hopeless romantic I feel like it is worth a shot in the dark. If for nothing more than to have a friend on the other side of the country I'd like to find this Mr. Louisiana that caught my attention. I do know he listens to country music so I'm hoping your radio station can help. Thanks in advance for helping me on this mission New Orleans!
By: Ashlee McKeehan on March 9, 2013

I love the station but would like more variety in classic country. Maybe a different play list for each day the week.
By: Larry on March 26, 2013

I'm from Arizona visiting my family in New Orleans and heard your station, and I love the it! You need to get on to iheart radio so I can listen to you in Arizona!
By: Shawn Cormier on August 3, 2013

Love the station BUT, listening on Tunein radio the song title and singer are no longer shown.......can this be rectified? Keep the great show going. Best regards Rick. (Cyprus)
By: Richard Wales on May 29, 2014

I was driving through southern Louisiana and this channel came up on the radio. There is a host, Nikki? She was reading the news and you could definitely tell she was reading it. I kept saying you can do it, you can do it, when she was done I felt like she should have gotten a smiley face sticker because it sounded like a third grader reading the news, like she had to sound out each word.
By: Anonymous on August 11, 2014

Hey, I have just recently found you on the internet. I'm in S/E North Carolina and love the old classics in country music. It would be nice if the song title and artist could be shown - my old mind knows the song but can't always recall the artist and TuneIn blocks it out So glad I found you.
By: DeLane Duncan on October 20, 2014

Found Your station today while surfing on the xxia app.Great music Fantastic quality. Saved as a favorite. Nice to know I can hear. You here in Louisville.Ky. as well as Nashville. Tn. Thanks!
By: ken willis on December 14, 2014

On Wednesday morning 1/14/15 around 9:45am y'all played a song something with sunshine in it lyrics. My mother who's had a stroke and seldom response to anything heard the song and waved her hands to the music when the song finished she stopped. No other song works what song was it please. Thanks for the Gumbo.We love y'all.
By: Ella on January 16, 2015

Fantastic station and format could not be better I find I am listening every time I am in the broadcast area. Today as I rolled through south Louisiana I heard a song about 12:45 about a deck of cards and how it pertained to the Bible did not catch the title or singers name would very much appreciate this info if possible. Thanks and I will keep rolling and listening. Leonard
By: Leonard Dodd on August 20, 2015

Y'all played a song that stated the steps of winning a lady's love it said step by step around 7.50 am on the 30 th what is the title and singer James
By: James ballard on January 30, 2017

Hi y'all my wife and I have been married 36 years i'm. behind telling her how much l love her I would like to request a song dedicated to her her name is Jolynn the song is I'll go to my grave love you by the Statler brothers thanks for the great job
By: Ken on June 24, 2017

Can you download and listen to Steven J Simon's song Tongue Tied, and see if it's something you would be interested in playing? He's an upcoming new country singer from berea in La. Thank you in advance.
By: Suzanne Hebert on January 11, 2019

My job transferred me to Avondale 3 years ago. Love it here. Love Gumbo 94.9 and don't listen to nothing else but why does the radio station go off so much. Today 4/24/19 went down between 1pm and 130pm. Was down a while back for days. After 3 days I just turned off my radio for 2 weeks. Happy to find out ya'll were back on. I was listening a couple weeks ago when the storms came through and the station took a direct lightning strike. The station only went down about 1 song. Can't do nothing about mother nature but the rest off the down time is really annoying as hell.
By: Wayne on April 24, 2019