City of License:
Gary, IN 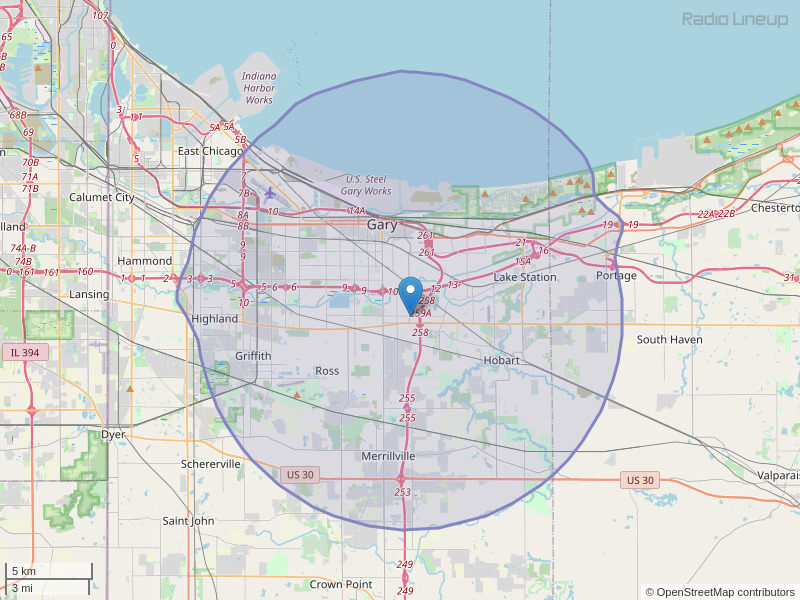 Goodmorning: I had been told that the Gospel music that is played on your weekend edtion is one of the best, including your DJ's. I also was told that you have great teachers of the Sunday School lessons on Saturday afternoon with Elder Clarance J. Harris, along with a group of Pastors and Elders on Sunday mornings. If the Gary Community School Corp. is not in the position to make it station mainstrean, then perhaps they need to think about selling it to someone who can and will make it mainstream. The station WGVE does not even have a website to which information can get-out to others. Please don't take my concerns offensively, I am just trying to help the station to get to a high level.If we as station owners are not trying to increase what we know and learn, how can we teach our children and or the next generation to do the same. Thank you for your attentiveness in this matter and concern.
By: Annette Pierson on August 6, 2011

Does anyone remember the Tradewinds Radio Reading Service? It operated on a side channel of WGVE during the school year and on the main frequency during the summer. The RRS studio was across the hall from the WGVE studios. I volunteered there from around 1984 until September 1985 when I left the Region. My shift was 5:00 p.m. until signoff (8:00 p.m.), Mondays, Wednesdays, and Fridays. I was the board engineer. I twiddled dials, recorded and played public service announcements, kept the evening log, cued the volunteer readers and did the sign-off (among other things). I also read the Gary Post-Tribune from 6:00 until 7:00 and filled in for readers who could not make their shifts. Of all the jobs I've held since getting out of school in 1979, working at Tradewinds Radio Reading Center was THE BEST! I've always loved radio (especially its history and old-time radio broadcasts) and it was a way to do something I thought would be fun. I really didn't think much of the public service end of it - for me, working on the radio was glamorous. I enjoyed being behind the scenes than behind the mic but it didn't matter either way. I can't remember who our major underwriter was but when it could no longer fulfill that role we had a change in management. The smaller salary could not support the previous program director so another was hired. I decided I would do a couple of original programs on Friday evening: "Audio Trash" and "Steppin' Out". The former was the reading of the tabloids, especially the _Weekly World News_ and such. Another person joined me and between reading the most outrageous articles we told jokes and made puns. The latter provided information on local and regional weekend events. I felt that people who listened to the RRS might enjoy a lighter type of programming at least once a week. Our program director never told me about any negative feedback for either show, so at worst no one cared and at best people enjoyed it. The studio was divided into two areas. The large area was for the transmitter and the office of the PD. I think there may have even been some mobile equipment. The glassed-in area had a tiny room for the readers and a larger area - the "behind the scenes" area (reel-to-reel tape recorders, turn tables, that kind of stuff) where I worked. The also was a teletype machine across the hall. Every time a major story came across the wire it would ding several times. Some time before 7:45 p.m. I would go to the teletype, find articles of interest and do a last roundup of the news prior to signing off for the night. One amusing story before I "sign off". During my time there the Marine Base (I think) in Beirut, Lebanon was destroyed. One of the readers did not show up to read the paper so the Volunteer Coordinator/Engineer (kept us on frequency and such technical stuff) filled in. As a reader he was a great engineer. His pronunciation of Beirut, Lebanon was "Ber-ROOT, Luh-BAN-un". After hearing the location mangled once too often I heard myself screaming through the glass " It's BAY-root, LEH-bun-non!!" I'm sure the listeners heard it. It did the trick, at least for the remainder of the story. I'd love to hear stories from people who may have worked there. I can't find anything about the RRS anywhere on the Internet. I know it eventually shut down after I left. Thanks for reading, and I hope this wasn't too off-topic.
By: Camille Stein on June 30, 2015

Had your wonderful station on the radio dial on a recently purchased vehicle. When the radio waves are clear, ( I live in Olympia Fields) you sound fantastic on my morning drive, What set me off was the "Do Wop" segment coming home from a friends house this afternoon. (12-31). These were on the Chicago air-waves when I lived at 81st. and Harvard . Back around 58-63. Simian High school was a Kroger warehouse,lots of industry and jobs, I went to St Leo. The Do Wop was very emotional to me as where I was raised was at one time my neighborhood. Brought back MANY memories THANKS. Denny
By: Denis Johnston on December 31, 2019

Listening to the radio at the moment and enjoying every minute of it. My favorite group is being spotlighted (The O'Jays). They went wayyy back to music from their beginning. thank You !!
By: Annie on March 3, 2020

Your new program format is terrible. I've been listening to WGVE fm for years, no more, I'm through. This station had a unique successful and highly popular variety of music. The new format is gang-rap , race-baiting propaganda. America and the City of Gary certainly did not need any more of that............Total Failure.
By: juan carlos on April 20, 2021

What happened to Billy Foster and Roy Gillis??? They were the best!
By: madeline wilson on May 13, 2021

Madeline and Karen, you are exactly right. WGVE had a perfect lineup and interesting variety of programs. Then, they were taken over and sold out to new management....Now, just more gangsta rap and socialist propaganda.................Instead of Unite, it's Divide all over again.
By: juan carlos on June 18, 2021