WKLB is an FM radio station broadcasting at 102.5 MHz. The station is licensed to Waltham, MA and is part of the Boston, MA radio market. The station broadcasts Country music programming and goes by the name "Country 102.5" on the air with the slogan "Boston's Number One for New Hit Country!". WKLB is owned by Beasley Media Group. 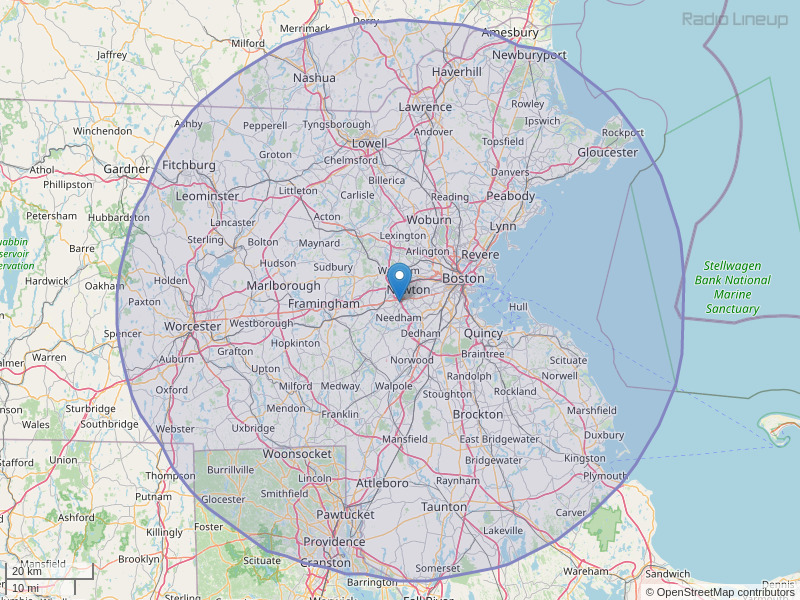 What Happened to Sunday Morning Oldies
By: John Blaney on June 22, 2014

what happened to sunday oldies, looked forward to it for years, don't old people matter any more. today's country is ok but with few exceptions, not like the old ones. going to take it off radio settings. very upset.
By: terry bruneau on June 22, 2014

What happened to Sunday morning oldies? That was my favorite of all the music.
By: Betty Rogers on June 29, 2014

Agree with the above comments. I will not be tuning to you anymore as well. Guess you hope all those why enjoyed the classics for years will die off and your listening audience will soar. Right now I would say you are in a downward spiral. Bye Michael and Stu, it was something to enjoy for all these years.
By: Skip Rollins - Salem NH on June 29, 2014

No modern country will ever replace the old country western rockers ! Modern day country is the same cater-walling no matter who the artist is. These new artists will soon be forgotten , not like those artists of years past ! Hope some other station picks up this old Sunday morning format. I'm done with WKLB&gt;
By: marsh rogers on June 29, 2014

Talked with another half dozen listeners disappointed with losing the oldies. Fire the exec that made that decision. It made you unique in Boston. Now we don't have a reason not to listen to The Bull. Loyalty? Goes both ways!
By: Cheryl on July 13, 2014

Listened to country oldies every Sunday until a few weeks ago until it disappeared. What's up with that 102.5????? Stupid executive decision.
By: Janet on July 13, 2014

I listened to country oldies most Sundays. What happened? I probably will tune to some other music station now. I did listen to the station during the week even tho I don't care for modern country.If I change stations I may not come back to 102.5. Sorry.
By: Ron Forstrom on July 20, 2014

plse answer these complaint in regards to sunday olies or u are going to lose a valuable group of people.......
By: catherine on July 20, 2014

ya what happened to sunday morning oldies that's country not all this new stuff.
By: dennis on July 27, 2014

Listened to 102.5 country oldies on Sunday morning for years. I looked forward to do things in the garage and put the station on and listen to two wonderful disk jockeys. Now you replaced with this country crap. The executive who made this decision should be fired. I guess listeners loyalty doesn't count anymore.well another listener bites the dust. Hope your rating will show you how many of us listened.
By: Al croce on August 3, 2014

Very upset that you took off Sunday morning oldies. Executive needs to be fired. You have lost me as a listener. I'll be listening to Sirius radio from now on. I hope your ratings plummet.
By: Matt on August 3, 2014

I am also very upset that this has been taken off the radio. I listened every Sunday with my 84 year old Mom it was one of the highlights of her week and my life. She would watch my boyfriend and I dance and he would dance with her. She is house bound and this is very upsetting to her and to us. Please bring it back!!!
By: Maria on August 22, 2014

I am missing the Sunday morning oldies. What happened?? I will not be listening anymore. I looked forward to that all week. Why not bring Stu Fink and Mike Burns back?? They were great!! They understood the importance of the history involved with the music.
By: regina on November 17, 2014

I really miss your Sunday Morning Country Oldies with Mike and Stu! At first I thought the show had just moved to a different time slot, and I would have to find it. No such luck! I hope you have perhaps misjudged how many loyal followers Mike and Stu had, and how many of us there are who very much favor the older style of country music. It was only 4 hours out of the entire week, and not all of those followers are old-timers.
By: Leslee on December 3, 2014

I am very upset that you took the Sunday morning country oldies off the air. It WAS the only reason I listened to your station! The modern new country is crap compared to the older country music. I no longer listen to your station because the new so- called country music is lousy!!
By: Lisa on March 12, 2017

Country oldies on WKLB is gone but not forgotten. But the hosts,Michael and Stu, now have Boston Country Oldies. I hear it Sunday nights on WCRN in Worcestor, but it also airs elsewhere in New England. They're on FaceBook.
By: Norman on November 5, 2018

I listen to Michael and Stu here in Maine. I didn't know they've been around for so long. Great show!!
By: Roderic on March 21, 2021