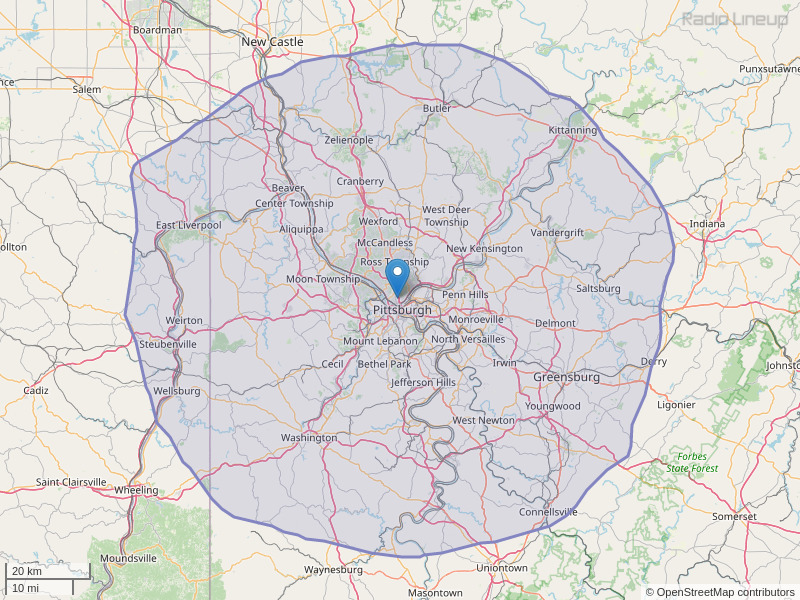 Around 7:30 pm for several minutes commercials were playing at the same time as the Savage show. Someone's asleep at the wheel!
By: Joe Hill on March 16, 2011

ATTN: CLEAR CHANNEL OWNERS & DENNIS LAMME, Just because you are paranoid, doesn't mean someone is not out to get you! With Jim Quinn, & Rose being taken off the air tells me this is the beginning of censorship, in what was our fine country that we lost. As of now, that is, hopefully we take it back soon. It is going to get worse. YOUR DECISION SUCKS CLEAR CHANNELS, & it is going to bite you in your butt!
By: Captain Bow on December 2, 2013

Clear Channels & Dennis Lamme (General Mgr.) I think you probably saw the devastating results since you left Quinn, & Rose go. In my opinion it is the beginning of censorship, & I feel threatened. You people caved, & should be ashamed. YOUR DECISION SUCKS! I have not listened to your station since. Get them back, If they would come back? Jim, & Rose, if you read this, we all miss, & love you. God Bless You, & God Bless America.
By: Captain Bow on May 19, 2014

I am very disappointed that Quinn & Rose disappeared in November. I have been listening since to KDKA for weather, traffic and news until 9AM. Then I turn off the radio until Beck comes on. I found there is no difference between listening to somebody Daddy and Marty of KDKA. Their presentations and content are as deep as a comic book, a waste of my time. Quinn presented a plethora of information from the Wall Street Journal to the Economist and beyond. I am hoping that when the non-compete time frame elapses, the Quinn/Rose team will return somewhere . When they do, I will be there!
By: Mimi Wells on May 23, 2014

so why all of a sudden do we have no talk radio anymore and I only have country music playing on 10 4.7. I've been listening for years and now I don't have what I would like to listen to instead I have
By: Anonymous on August 8, 2014

The fact that you took fm news talk off wpgb 104.7 Pittsburgh totally sucks just cause your some tree huggin liberal doesn't mean everyone is. And on top of that you put on a country station oh i'm sorry 10,000 songs commercial free yeah the same 4 song you play over and over on your other stations. We want talk radio back where the only real truth is heard. Should of know when you took Quinn and rose off that more was to come and replaced them with that liberal for WV. yeah real good job there. So in conclusion YOU SUCK!
By: you suck on August 8, 2014

Why would you take Quinn and Rose off of the air? By now, 8/8/2014, your ratings must be down considerably. So, if it was a manager's decision, you need to consider replacement of someone, who lost what is (was) the reason you had such a much larger listening audience than you do today. Now you have gone to country music; really? It was bad enough. Now there is no reason to listen to 104.7.
By: Dennis Johnston on August 9, 2014

I listened to your station only because of news talk radio. You took Quinn off and your station went to bad. Now, your a joke and will be irrelevant. Lose money fools. Only libtards can do that.
By: Mike on August 9, 2014

What happened to the station?! No talk, just "country". No Rush, no Quinn & Rose. I guess I'll take my business elsewhere, now. You're no longer a preset on my radio. I might reconsider if the format goes back to the way it was.
By: Martin on August 14, 2014

Terrible decision to replace talk radio with country. This station manager is out if touch, and probably not a very effective manager. Confirms my decision to renew my XM subscription.
By: Jason on August 18, 2014

Just what we need; another "Crying Cowboy" music station. What the Hell is wrong with your management group ? You had one of the best talk shows on radio nationwide, especially with Quinn & Rose and you blew it. Did the Feds threaten to pull your license? The World is coming apart at the seams and you think it's better to play hillbilly music rather than current events and discussion. Your off my dial. Pass this along to your sponsors.
By: gary neely on August 26, 2014

Must agree, you must be pressured by the gov. to shut down free speech and veiws other than Libs. You will never make it everyone is gone but a few hillbilly that don't spend money on your sponsors. I will struggle with am 13.20 am. I am sure you won't put that station in your comment section.
By: John Silvers on August 28, 2014

I'm very disturbed to find that once again Conservative Talk Radio has been targeted.. Another media silencing tactic!!!! It used to be in AMERICA that if you didn't like or agree with another person or groups views or choices you would just ignore them and not tune in but now we work to silence the opposition by removal!!! That's not FREEDOM!!! No matter how you spin it.... it's wrong!! Have courage to hear or ignore the opposing views not silence them. Bring back Rush Limbaugh, Sean Hannity, Jim Quinn and Glenn Beck.. We already had enough Country station choices in Pittsburgh. BRING BACK CONSERVATIVE TALK RADIO on 104.7!!
By: Anonymous on September 25, 2014