WSSL is an FM radio station broadcasting at 100.5 MHz. The station is licensed to Gray Court, SC and is part of the Greenville-Spartanburg, SC radio market. The station broadcasts Country music programming and goes by the name "WSSL 100.5" on the air with the slogan "Greenville's Best Country". WSSL is owned by iHeartMedia. 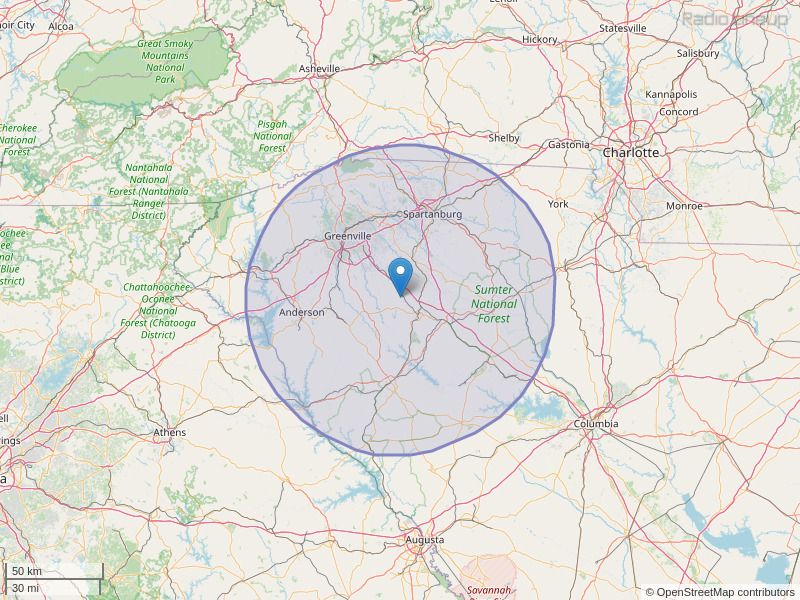 What has happened to Bill Ellis? Love Beth Bradley and used to be very fond of Bill. He's dissing his wife because he's horn-dogging after someone young enough to be his daughter. She breaks up with him seemingly every other day & he goes crazy posting more on Facebook than a teenage girl. Anyone who believes she's got that disordered eating under control-LOL! Currently waiting to see when Bill starts posting pictures of his bowel movements. So narcissistic with all the selfies and can't do anything for anyone without posting it so peeps can praise him. He pushes the alleged anorexic's business all over the place but doesn't help his daughter-in-law with her business and that poor girl has been working two jobs because Bill's son wasn't working. He can't help her with Plexus because the off and on girlfriend doesn't approve of it? He used to talk on radio all the time about Metabolife or whatever that was. That sound you hear is people pushing the button to another radio station. Who goes on dated and posts on Facebook the whole time? Anyone who is truly enjoying someone's company doesn't think about Facebook. If he keeps this up then hope you pair Beth with someone whose balls aren't being carried around in a girl's purse. This is just an opinion. Love all of the other on-air personalities at WSSL. Peace out.
By: Anonymous on June 11, 2015

I just stumbled upon this & read the interesting comment. Why would anybody in the public eye post a copy of their divorce papers? Is Mr.Ellis that much in need of a virtual pat on the back? So he's fair in his divorce. Aren't we all supposed to be fair?Does that make him special? Because he's doing what he's supposed to do? After he rambled on the other day he said he wouldn't talk about it anymore & is moving forward. He's milking it for all it's worth on social media. Most people think now that all of Mr.Ellis' facebook posts, tweets etc are meant to get the attention of the young girl he dated while he was still married. The public is becoming less enamored with this pity party. It appears that the young woman he dated has young children. Children close in age to Mr. Ellis' grandchildren. What was she supposed to do? Be done with getting her kids through the diaper years & in a few more have to change Mr. Ellis' diapers? WSSL mornings used to be fun. Bill Ellis used to be witty. Wish he would cease being so pathetic. There. That's my two cents.
By: Michelle on August 7, 2015

Many of us had started listening to Ellis and Bradley again after the drama with Mr.59 year old Narcissist and Ms. Eating Disorder had subsided. Have you ever seen a 60 year old disc jockey take so many selfies and post ALL of his boy scout good deeds every single day? He's leasing an apartment not buying a home in Thornblade. OMG! After we all rode the anorexic roller coaster with him and Ms.Eating Disorder (wretched "dancer" as one person calls her) in his own words before he deleted them "too much drama" "added insult to injury" "gonna be with people who actually want to be with me" he did meet a beautiful woman more his age. She's part of a well respected and very fun group. Apparently he's intimidated by women his own age. For the ones who opt to stick with WSSL for this soap opera it will probably be quite entertaining. Everyone just hopes and prays that he doesn't exploit another man's young children this time around. It's no secret that most who are acquainted personally with this saga don't have the patience to go through it again. Her "business" slacks off because her clients, say she can't be bothered to post a schedule or to alert people that class has been cancelled so he advertises for her. Her very cute young boyfriend can't put up with anymore. Lord help us! WSSL used to be THE station. Poor Beth! She must be holding her breath for the drama that is certain to unfold. No mention of the grandchildren once Ms. Eating Disorder is back in the picture. He can't be bothered to sing the praises of his hard working daughter-in-law who is an absolute saint! How many "careers" has his son been through in just the past few months? He has a few who hang on his every word and post over and over again to his social media but the demographic that advertisers are seeking to capture the attention of-the ones with disposable income-have already moved on or will soon. Beth needs and deserves a less attention seeking, cradle robbing partner. To the person who posted wondering when Mr. Toot My Own Horn will start posting pics of his bowel movements-it will be soon. There's nothing else left. Just my personal opinion. And apparently of many others. Happy holidays.
By: Shawn on November 19, 2015

Wowee! Travel much Mr.Ellis? I guess not. Alert the media! People fly every day! People rent apartments every day and don't disclose what their rental payment is. That was just Tacky with a capital T! Wonder how long it takes Mr. E to set up each shot before he posts it? Drinks, carry ons, selfies, etc. And now he's ruined WSSL Tracks by making it a weekly pathetic homage to the young girl who does the ratchet dancing. The other person was incorrect in saying "wretched". Although that works too. How many times is he going to repeat "You know when you haven't talked to someone in a while and then you do and they don't sound like themselves?" He's done it at least twice and then cue the music "That Don't Sound Like You". Nice touch adding Keith Urban "Tonight I Wanna Cry" last week. What a pansy! That's an old song too. And oh Lord don't forget "I'm Coming Over" and "BreakUp In A Small Town". Does everyone else love how he can take anything that anyone says in an interview or posts on social media and twist it and turn it to make it about himself? Narcissistic at it's finest! Has anyone ever seen Bill Ellis and Jethro Bodine in the same room together? Just sayin. How is he going to be Danny Ford's son-in-law if he had dinner with his daughter once and there's no romance? But it didn't happen if you don't document it with a picture or say it on the radio. People are still trying to wrap their heads around him posting divorce papers and endlessly gushing about being "fair". I guess "fair" is when your ex allegedly shares a car with your 30 year old son who allegedly still lives at home? But by all means allegedly use your blood, sweat, tears and $$$ to help a a girl young enough to be your daughter with her business from signage to sound system to whatever while your precious daughter-in-law works her butt off to provide for your 3 grandchildren and you couldn't be bothered to help promote one of her side businesses. And continue going over to do yard work at the ex girl's house even though it's "weird" being over there while your daughter-in-law has to uproot her 3 kids and move from their home. Yeah that's the ticket! Everyone loved how he posted about having tickets for an upcoming concert and someone said "Take your daughter-in-law. I'm sure she could use a night out." And he ignored it. Here's an idea! Perhaps if he had been home doing homework with his boys like he gloated about doing with the young chick's young children maybe they would have more viable careers in their 30's. It's just a thought. Good thing those grandchildren have their mother and her sweet family to take them on beach trips because Mr.E posted that he would take them but he had to keep making solo trips to talk to the ocean about the young chick while she was making trips to their "special place " with other people. Hey y'all he's a "public figure"! He's going to get feedback. God bless.
By: Anonymous on January 15, 2016

P.S. Peeps really wonder what happened to Krimson. Mr. E was posting about her and of course commenting on posts about her son because isn't that the pattern? To get in good with the kids? She was a "kitchen hottie" and then vamoose! They were even allegedly both at the same event recently but no mention. Very interesting! Between on air, WSSL Tracks, social media etc this has all the makings of a telenovella!
By: Anonymous on January 15, 2016

Fiction Addiction now carries Nick Knardirell's latest crime fiction novel, Minnesota: Her Account; Her View. Nick Knardirell has released her latest crime fiction novel, Minnesota: Her Account; Her View. Minnesota, details the upbringing, rise and fall of crime lord, Fuada Busticnam. Leading a double life as a crime lord and an upstanding citizen with civil duties, Fuada would be the least likely candidate to commit any criminal activity. From prison, she narrates the life she led. Innocent bystanders who escaped from prison to clear their names must journey to Minnesota in order to find Fuada. Her brother and the FBI await Fuada's arrival, but mayhem ensues!
By: SK on January 15, 2016

Oh lordy! Can Bill Ellis be replaced? People be wanting to know what happened to poor Lori that he made a huge announcement about finding "the one" and now word is he's sniffing around the bulimic chick again because peeps are saying she's had yet another "relationship" go kaput. He posted an awkward picture from that charity event and everybody was like "Look at the old man with the shiny forehead and combo over standing with his daughter." So many people saying they can't stand to hear him on radio or see him on tv anymore. Get someone less pathetic. Please. More peeps growing sick of him by the day. He's a public figure who is becoming a punchline. He sure likes to take pictures of himself. No fool like an old fool!
By: Laurie on March 19, 2016

Bill Ellis when someone passes away "I. I. Me. Me. I was...I will...I did..." Got to admire someone who can make EVERYTHING about him. How's y'alls buddy Krimson who was convicted of embezzling from the Chamber of Commerce? Is she in prison yet? Keep up the good work WSSL! Everyone loves Beth & Aaron! Btw Bill it's not cool to describe an elderly gent at the gym in the manner that you did a while back. Not cool at all. ✌
By: Anonymous on September 4, 2017

I was given the 411 on this site & kmsl! Y'all leave Billy alone do y'all hear? Bless his heart ♥! He's getting some new hair or has a rug on his head or something. The comb over looks different. Good for him! Happy Valentines Day!! 💘💋
By: VM on January 28, 2018