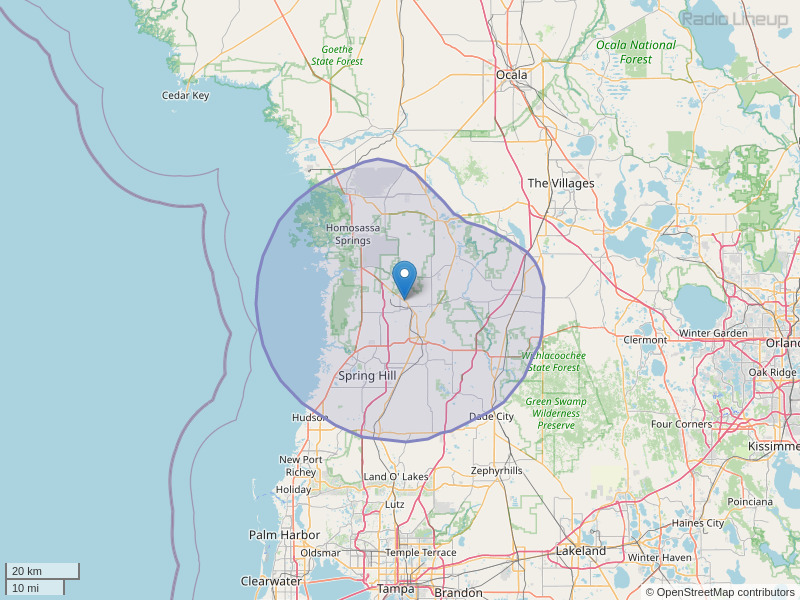 I'm listen right now to JR, as I do every morning during the week. Love the show. I'd like to comment on the topic you're discussing this morning, red light cameras. My wife and I solved the problem right after Brooksville installed its first camera. We haven't shopped there since. And if we go to Webster of Orlando. We just drive a little south and cut across on one of the country roads that again connect to Interstate 50. See, no problem.
By: david robinson on September 17, 2013

Saturday, March 28, 2015 Benefit in the Memory of David Navarro, Jr. Location: Airport Farmer's & Flea Market, 17375 Spring Hill Dr, Brooksville, FL 34604 Times: Benefit activities including dunk tank and 50/50 raffle, will take place throughout the day between 9 am - 3 pm *** Benefit Concert by local Spring Hill Band, "Shadow Ridge" on our stage from 12 pm to 3 pm *** Life is precious and fleeting as in the life of 16 year old David Navarro, Jr., who lost his courageous battle with Cancer in August 2014. David was the son of one of the Airport Farmer’s and Flea Market’s vendors, Dave Navarro & his wife, Seti and the brother of his sisters, Amanda & Christina. David was diagnosed with lymphoma on Feb. 4, 2014 and passed away on August 24, 2014, at the Arnold Palmer Hospital in Orlando. During his 7 months of treatments, David was in the Cancer ICU ward numerous times and he and his family basically lived at the hospital, but being the special person that he was, David Jr. expressed to his family that it was his wish to provide decent TV’s for the ICU ward so that other kids battling their illness had something fun to fill their long days. Thus it has become the family’s goal to make that wish come true. Because Arnold Palmer Hospital is a non profit hospital, they rely heavily on donations and the family is determined to reach their goal to provide 32” Flat Screen TV’s for 17 patient rooms, 2 family rooms, the nurses lounge and a 42” Flat Screen for the large family gathering room. Their goal is $4500 and all monies that exceed that amount will go to additional charity for patients in need at Arnold Palmer Hospital. Dave and his family have collected almost $1500 but still need $3000 more to reach their goal. It is the desire of all of us at Airport Farmer’s & Flea Market to help the family meet their goal and help fufill David Jr.’s wish. We are pleased to have David Navarro Jr.’s Benefit here on Saturday, March 28, 2015. There will be a concert by local band "Shadow Ridge" who have generously donated their time and talents, on our stage from 12 pm - 3 pm, a 50/50 raffle, a dunk tank and so much more going on throughout the day. Please plan to join us and let’s help this loving family make David’s wish come true. For details or if you wish to donate your time and talents, call the Market’s office at 352-796-0268.
By: Dorri Spoto on March 12, 2015

PLEASE PASS THIS ON TO MIKE AND J R ON MONDAY I called Friday and talked to J R about the following subject, I am a disabled veteran with a totally disabled wife and as a result of Irma our Air Conditioning shorted out as a result of the reconnect according to the AC company we hired to fix it. But this is not the primary reason I am writing this . I want to make everyone aware of the attitude of WREC and some local Veteran organizations . I finally decided for the first time to apply for financial aid or help , I called the Hernando county emergency site and they gave me 3 contacts to start the process. As a veteran I had to go to the Brooksville V A Clinic to the Social Worker and get a letter of introduction to a Veterans organization called DD214 . I spent 2 hours getting the letter and then calling the organization to ask them for assistance and what they required. Well this was there response: THE INDIANS HAVE LIVED IN FLORIDA FOR "500" YEARS AND THEY "NEVER" NEEDED AIR CONDITIONING . WELL I IMMEDIATELY WENT BLANK AFTER HEARING THAT RESPONSE AND COULD NOT REALLY VERBALIZE AN ANSWER. THE NEXT POINT OF CONTACT WAS WREC AND THEIR "OUTBOUND" ASSISTANCE PROGRAM OR SOME SUCH NAME, I STAYED ON THE HOLD LINE FOR AN HOUR UNTIL RIGHT AT 5 P.M. AND TALKED TO A REPRESENTATIVE AND AFTER A BRIEF EXPLANATION OF WHY I WAS CALLING GUESS WHAT HERE RESPONSE WAS " AIR CONDITIONING IN FLORIDA IS A PRIVILEGE NOT A RIGHT!!! I WAS ALMOST READY WITH A RESPONSE BASED ON MY PREVIOUS PHONE CONV. I ASKED HER DID SHE UTILIZE AIR CONDITIONING AND TO MY SURPRISE SHE STATED FIRMLY NO SHE DID NOT AND HAD NOT USED IT IN LIKE 67 YEARS OR SO. I AM NOT EVEN CLOSE TO BEING A LAY PSYCHOLOGIST BUT YOU NOW CAN HAVE A SMALL INSITE AS TO WHY THOSE NINE ELDERLY SENIOR CITIZENS DIED. I HAVE ALL THE NAMES , LETTER, AND PHONE NUMBERS TO BACK UP EVERVTHING I AM SAYING SOME ONE REALLY NEEDS TO WARN THE OLDTIMERS AND VETERANS ABOUT THESE MORONS WHO REPRESENT OUR PUBLIC UTILITIES AND VETERANS ORGANIZATIONS. AND NO I REALLY DO NOT THINK A CONGRESSMAN WOULD HELP!!!!!!!!!
By: wayne chancey on October 16, 2017

I was listening to the station this morning and one of your idiots who knows absolutely nothing about the Trayvon Martin case said the guy with the gun started the fight. Obviously this guy has no idea he's ignorant he stupid he believe the lies. Zimmerman was a neighborhood watch person he didn't start a fight he didn't do anything illegal. Trayvon Martin is the one who physically attacked the man he's the one that started the fight. And a new case the man with the gun didn't start a fight he was telling the lady who was parked illegally in a handicap spot and the man and young big strong man attack him it is not against the law to tell someone they are breaking the law to complain to them that they are breaking the law that they are parked in a handicap spot that is not starting a fight. The young woman waited till the young strong guy came out of the store and headed back to the car she jumped out of the car and went towards the man at the same time the young man came up and body slam this guy to the ground the person who started the fight was a guy who did the physical attack the unarmed black guy half his age and twice his size. I can't stand ignorant people on the radio who say the physical altercation was started by the person who never touched anybody. If that's the type of society this guy on your radio station wants to live in one where if you talk to somebody that warrants getting beat up or killed. he saying that if I saw a shoplifter and I started telling a guy look you're shoplifting you're breaking all all put it back that means I should be beat up for doing that. very unsatisfied with your show this morning and the fact that the other person did not bring out the point that in both cases he was wrong Trayvon Martin started that fight this other guy started the fight.
By: Jim on August 7, 2018

Please tell Mike to stop talking about picking your nose on the Am show. People are eating breakfast and he's disgusting sometimes.
By: Opal on March 14, 2019

Please not this station's programing is via satellite and very few local shows are produced here.
By: Frank Stevens on June 13, 2019