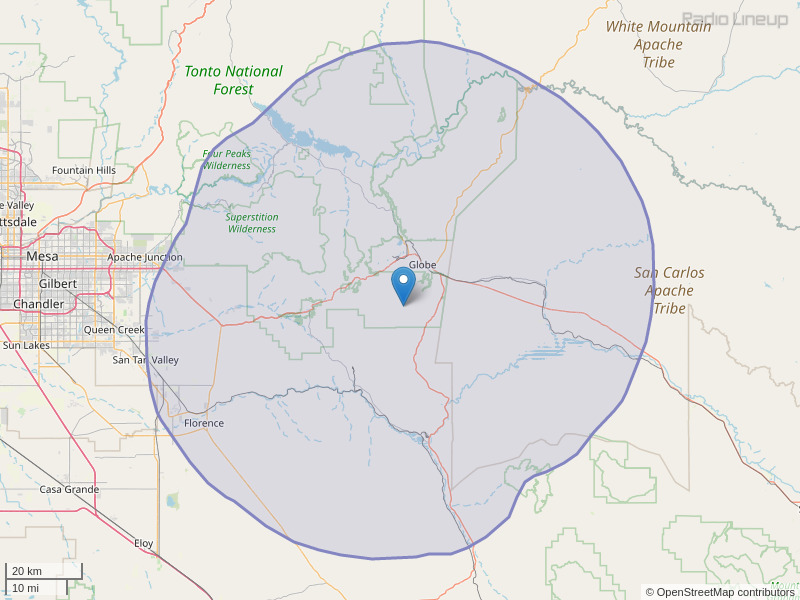 KCDX is one of the most interesting stations in the country. A lot about the station is a mystery like who is the owner, why is it commercial free, how do they make money, who picks the music, and more. The station airs a unique blend of typical classic rock songs you have heard a million times as well as deep tracks that unless you own a ton of albums you haven't heard before. The station has been commercial free for more than 5 years now and has developed quite a following. The only downside to the station is that often the station is either off the air or broadcasting static.
By: John on December 9, 2010

went on vacation,came back to broadcasting static. Hope all is well. love the station!
By: robert vanderaa on August 4, 2012

Have not had any reception to pick up your station for over a week and I live in gold canyon
By: Bruce on December 2, 2014

In the valley for a week and listened for 5 days and then off the air. I was bummed.Trying to pick up on-line in Chicago.
By: Bobby Russell on March 24, 2015

I love this station so much, that when it mysteriously go off the air I experience anxiety! The only substitute I find tolerable is channel 833 on Direct TV, come back KCDX!!! KCDX is THE BEST station I have ever listened to.
By: Denise in Gold Canyon on February 14, 2016

For more than a decade - continuing to blast out the hits in central Arizona. During the political season, a rare item will pop up from time to time - a single commercial every 30 minutes or so. Still worth of listening to as frequently as the signal allows! --kw in the Cactus Patch
By: KW on September 2, 2016

Oh - one more item. Please consider adding an RDBS (radio broadcast data system) feed to the channel. It'd be great to look up some of these old, ancient tracks that are played here!
By: KW on September 2, 2016

The best station ever! I only wish it was available throughout the metro Phoenix area, not just the East Valley.
By: JO on October 30, 2016

Mn snowbirds. How refreshing! Your music travels thru the the rv parks with us. Don't need my XM down here. THANX!
By: GD lilja on January 23, 2017

Love the station when it is broadcasting, great verity of music. Why so much dead air?
By: James Bergman on April 10, 2017

For the first time in my >60-year lifetime I heard the"Eurotrash Girl" ballad on KCDX. It's a quirky story of a series of disappointing seriocomical experiences by a tourist to Europe I listen to attentively every time it's played while I'm listening.
By: Dan on June 21, 2017

Would gladly contribute monthly. Set it up Ted and let us know how to help, as we should. This dead air time and (sometimes) days of static are killing me!!
By: Gabe on July 11, 2017

For those who don't know: KCDX is available everywhere! We are east of Denver and we have to get KCDX from Simple Radio , the app or check the KCDX site. The only station that plays the deep cuts we first heard on the original ground-breaking FM stations if the early '70s. At least in Denver. We still have a lot of our old albums, but KCDX has them all, I think! Thank you!
By: Linda Rockhold on December 2, 2017

I know and love a lot of the old songs on here, but there is one I am stumped on, and dying to find out who does it. You play an old version of The Mighty Quinn. Who is the artist. I know it's not Manfred Mann, or Dylan.
By: Mike jackson on January 19, 2018

if you listen with any consistency, like I do,I think that the reason for the dead air emerges - KCDX is really a series of pre-arranged combinations of songs, done in probably 1-hour loops. They run for awhile while Ted or whoever is involved create new loops from listener requests or their own faves. They take the operation down to replace / resynch the loops, and then come back up. I used to drive to work to the same songs every day for about a week.
By: Mark Baranowski on February 14, 2018

Please, please please boost your power! I live in NE Phoenix and have to listen through some static. Great station!
By: Nathan on June 11, 2018

Trying to find out who that band was that you played. Braintree can find info on them. Plus searched song Gray haven also. No luck can you help me? Thanks Dean
By: Dean on June 26, 2018

Heard an obscure Climax Blues Band song this morning (trying to find the name) which was a great way to start the day. CBB is perhaps the most underrated band and never heard anywhere, other than "Couldn't Get it Right", which i think is their only top 10. Listen to the Sense of Direction or Gold Plated (esp Together and Free)... packed with great songs.
By: Bill on September 27, 2018

I own a vintage marantz2270 receiver and I have no problem picking up your station in Phoenix but the dead air is disappointing love your station please fix the dead air
By: AL on September 30, 2018

Love you eclectic music choices.
By: Kathy Hanners on July 15, 2019

I've enjoyed this station for over ten years now. The dead air is a bummer at times but without commercials one can't complain. As bad as most newer music is these days this labor of love for great music is much appreciated by me. Thank You! If I had a suggestion it would be to hear some tracks from the the album's Gimme Back My Bullets and Nuthin Fancy by Lynyrd Skynyrd. Keep it up!
By: Brian on August 18, 2019

Love this station really don't know what will be next
By: Anonymous on July 19, 2020

there seems to be more power in queen creek lately, but when the station goes off the air, my vehicles pick up signal fine, and i have an outdoor antenna on a pole???
By: ronald b hunkler on February 8, 2021

Update your website...it's not working and Imiss listening!
By: Joseph A Reilly on April 27, 2021

hello, ted, rancher ted... "(woman's voice) Riding on the chuck wagon, Following my man. His name is Ted, Can you believe that? Camping on the prairie Plays havoc with my hair." any way, since you wont open email, hey, we all get hacked, 10 - 15 years ago your format wasnt so top forty. there was much rejoicing.ie, deep tracks. without you station theres nothing worth listening to. one, lets says, on that caveman morning show pair, expessed to me he doesnt like the music . deceiving the listeners. kinda like "being to white to be a coca cola emplotee". just my 2 cents THANK YOU SIR
By: w sears on May 22, 2021

KCDX has promos that need to be updated. This station definitely airs commercials, but the promos say they don't. I tried to contact the station via the only email I could find(guru@kcdx.com)but it is no longer viable.
By: fred on October 30, 2021

Wish they would fix the just played on kcdx.com and the search playlist feature. Seems to be not working for a LONG time now.
By: Jeff in Tempe on November 24, 2021