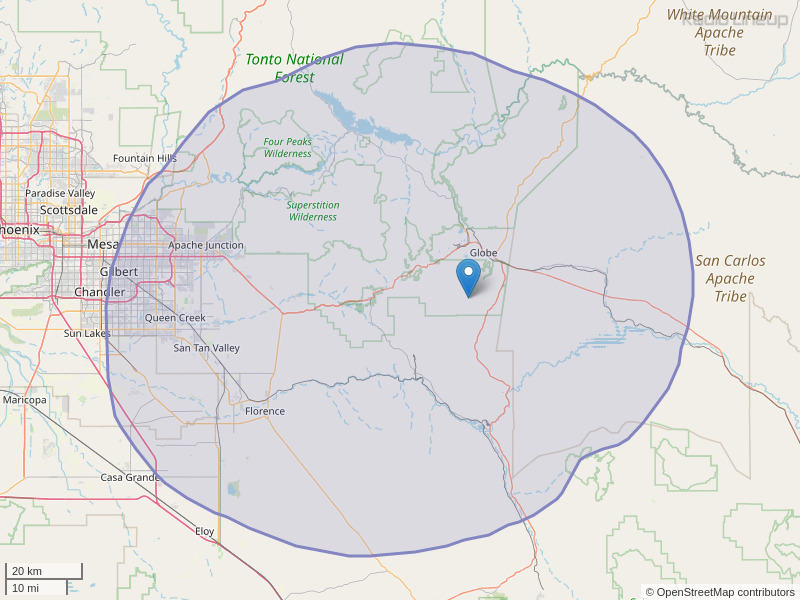 KIKO 97.3 is now "Funny 97.3" and it airs programming from 24/7 Comedy network. The programming consist of 3 or 4 minutes of comedy bits taken from a standup routine. The station is good to turn on when all the others are airing commercials. This channel doesn't seem to air much advertising right now.
By: John on April 6, 2012

Probably the best rock oldies station in the Phoenix area. No screaming dealer advertisements just a lot of good music. I wish you could broadcast at a higher strength so I could pick you up anywhere in the valley. Keep doing what you're doing! Thanks.
By: Larry on March 28, 2016

I live in Casa Grande Az. Why is it we are not able to pick up your station anymore? It is the only radio station we listened too. Now we are musicless. Please try to get back into our area. Thank you
By: Scott Peraino on March 19, 2017

Its been 3 weeks since you stop broadcasting in Arizona City WHY? we love your music selections its what we grew up listening to, bring it back please
By: Edward on April 1, 2017

We are attempting to reach the Owner and/or Engineer for the 97.3 signal as they are severely interfering with our audio and also on our neighbor 99.1FM. We have received just over 15 complaints in the past 7 days. We have attempted to contact the station phone number but there is no answer. I DO KNOW that the FCC will answer our call but will continue to contact KIKO for another day or two until we have to address this interference issue caused by the 97.3 transmission. Scott Kramer General Manager KRWV-FM 602-625-3000(cell)
By: Scott Kramer on May 8, 2017

I can’t download the app so I could listen on my phone or tablet but I wasn’t able to. So need to be able to because you ave become my best radio station
By: Jackie on February 15, 2019

Why is it echoing?It has been for 3days and nights. I know cause I leave it on 24/7. It is ruining the memorial day weekend. Can you fix tilt please? By the way you play the best music and you come in in Casa Grande the best out of all of them. I know cause I've tried them all! Please fix it fast cause I've looked forward to this weekend for the best music. Yes I am 64 years old and this was my music and memories. It's all I have left. Keep on playing!! Please fix the echo!!
By: Crystal Young on May 25, 2019

love your station, sometimes I can't get it.I live in east mesa, Also a lot of young people listen as well and would like to know who sings the songs
By: mike selling on December 13, 2019

Why aren’t we able to get your station anymore in Arizona City? Did you move to another station?
By: Gabriel on August 20, 2020

Volume is slow low compared to other Phoenix stations. When moving around the dial have to turn KIKO way up to hear it and then back down when turning to other stations.
By: Pinal Guy on September 8, 2020

I love the oldies that I used to enjoy out here when I was living in Phoenix in 63-64. I really wish you could get an app to download so I can use it on my iPhone. I now live in Arizona City after being absent from Arizona for 56 years and I'm finally home! Keep the sweet tunes coming, please?!
By: MO on March 25, 2021

This station's microwave or satellite dish is off a bit and causes the signal to drop out a bunch lately.
By: Anonymous on April 3, 2021

We live in Casa Grande and cannot pick up your station. Are you still operating?
By: Mish on April 9, 2021

I don't think the owner cares about this station. Doing nothing to get it back on.
By: Anonymous on April 9, 2021

Music got interrupted by a "Breakaway One" notification they didn't pay for the license. Are things that rough for KIKO?
By: Gail on July 16, 2021

Still some occasional drops of the signal for half a second or so.
By: Anonymous on November 15, 2021

Audio quality has gotten really bad. The bitrate of the audio is really low and it at least one song was in mono. I just don't know with this station... so oddly run.
By: Anonymous on April 8, 2022

They recently changed their library and now play songs that they didn't before. One new song to the playlist is Mambo number 5. They really stands out like a sore thumb. In addition to the change in library was a huge drop in audio quality. If they fix the audio and drop Mambo number 5 I would probably listen more.
By: Anonymous on April 30, 2022