Seattle's Best Variety of the 80's and more

KJEB is an FM radio station broadcasting at 95.7 MHz. The station is licensed to Seattle, WA and is part of the Seattle-Tacoma, WA radio market. The station broadcasts Classic Hits music programming and goes by the name "95.7 The Jet Seattle" on the air with the slogan "Seattle's Best Variety of the 80's and more". KJEB is owned by iHeartMedia. 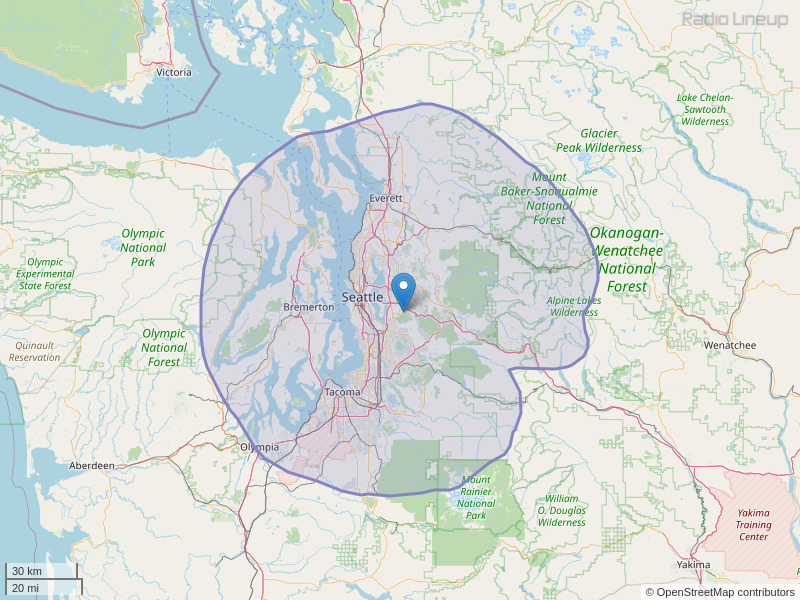 I can't agree more! The morning drive time talk show is BAD!! Is it supposed to be funny, 'cause it isn't... Please return to the oldies in the morning--stick the talk show in the middle of the work day, if you have to keep it.
By: Mabel on April 29, 2011

Bob Rivers show is entertaining and enlightening with their humorous discussion of current events.
By: Don on May 27, 2011

I dont get up earlier enough to hear the song of the day so I can call for a chance to win. But I do listen for the rest of the day and evening, can i get the information on the internet so I can still play?
By: CHERYL DECHAND on October 25, 2011

I will not listen to your station anymore until you stop playing an edited version of Peter Gabriel's "In Your Eyes" (in case you don't listen to your own playlist, I'm referring to the deleted lyric, "I see the doorways to a thousand churches, the resolution of all their fruitless searches"). You have no right to edit an artist's work, especially someone as established and respected as Peter Gabriel. If you do not agree with his lyrics, DO NOT PLAY THE SONG!
By: Dale on July 31, 2016

What happened to Marty Reimer on the morning show?
By: Darryl Berg on January 31, 2020

Anybody know what happened to Marty? I see other people have asked as well but no response.
By: Kelsey E Stevenson on February 11, 2020

Why is no one answering the question what happened to Marty??? Is he in a witness protection program?
By: Kelly on February 17, 2020

I agree it's kind of weird that there is no word on what happened to Marty...and Luciana for that matter. Just a little info on the programming change would be appreciated by the listeners!
By: Liz on February 22, 2020

https://www.seattletimes.com/entertainment/seattle-radio-man-marty-riemer-lsquoi-felt-like-every-day-i-was-lyingrsquo/ I was also curious about Where's Marty - Here you go.
By: Robin on March 30, 2020

carona virus I think we need to get ALL radio stations in the world to get together every day, (say 5PM) and play the same upbeat song, different every day. my choice for the first one is We are the world run with it - make it happen thanks in advance bill
By: bill boender on April 5, 2020

Marty was the thing that made the morning show good. Also, they cut out an entire section of Billie Joel's song "Piano Man". " Now Paul is a real estate novelist Who never had time for a wife. And he's talkin' with Davy, who's still in the Navy. And probably will be for life." I'm guessing that sometime around August or September of 2019 the show had to make budget cuts and had to get rid of half the members.
By: Bryce Callahan on May 12, 2020

Hello, I looked at site Robin mentioned but that link talks about his firing from the Mountain. I still can’t find any information as to why he was let go from 95.7 The Jet
By: Jessica on July 21, 2020

Where is Marty? And the rest of the morning team? He and Jodi sounded like they were long time friends? This new guy is not very good. There is waaayy to much "dead air" time between his comments. It's radio, let's keep it moving people! I hear Jodi trying to fill in the long silence, but it happens so often that she just has to sit back and let it happen. She shouldn't have to carry the show all the time. Jodi who is very funny, and the banter between her and Marty was lively and fun. It feels and sounds forced and scripted now . Jodi sometimes sounds board with this guy, When he comes on to talk I find myself changing the channel. I hope Marty and his family are well and there is no health related reason for his departure. Bring back your morning team!
By: Terri on October 11, 2020

"carona virus I think we need to get ALL radio stations in the world to get together every day, (say 5PM) and play the same upbeat song, different every day. my choice for the first one is We are the world run with it - make it happen thanks in advance bill" By: bill boender on April 5, 2020 That sounds like a fun idea, we need more positivity in our lives! ZBG
By: ZBG on September 7, 2021