KSAH is an FM radio station broadcasting at 104.1 MHz. The station is licensed to Pearsall, TX and is part of the San Antonio, TX radio market. The station broadcasts Regional Mexican music programming and goes by the name "104.1 Norteňo y Mas" on the air with the slogan "La Estacion De La Raza". KSAH is owned by Alpha Media. This station broadcast a majority of its content in Spanish. 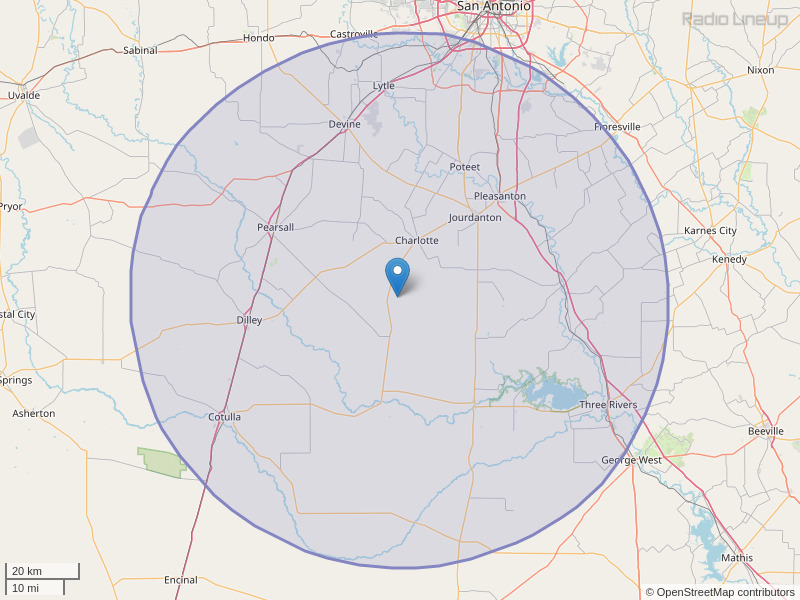 am trying to find out who else on this station sings the song y llegaste tu, its an older artist and its a slow song. need to knw who the artist is please. want the song for my first dance at my april wedding, thanks juanita aranda, phone number to contact me if you knw wat song im talking about; 830 333-3072
By: juanita aranda on October 9, 2012

I recommend this station 100%! This station plays the best Mexican music from Cornelio Reyna to Espinoza Paz, from Los Tigres Del Norte to Intocable. This station has it all!
By: Hernandez2014 on November 25, 2012

I listen to this radio station on a daily basis and enjoy the music. Although, I would like to hear more of the music from Jenni Rivera, La Diva?!
By: Margarita Leal on December 20, 2012

On june 12, 2013 I heard a song by Vicente Fernandes.. las doce pegaditas con Vicente..I really like the song as it fit my life perfectly.. The song is about a man asking a woman to go with him as a friend for a cup of coffee..seems like this woman was his girl in the passed perhaps many years ago and now they are both in their golden years and he is now dieing, but wants her to know that he really never got over her...WOULD LIKE TO KNOW THE NAME OF THE SONG AND THE NAME OF THE CD IF POSSIBLE..YOUR HELP WILL BE GREATLY APPRECIATED
By: Guadalupe D. flores on June 13, 2013

I was listening to your radio station this morning and her a comercial on a car auction but couldn't write the address or phone number down because I was driving can you please send me the car auctions information thank you
By: Enrique on August 13, 2013

I would like to find out how, or where to go about getting some bumper sticker,kozzies,etc., so I can send to my family in Wisconsin.
By: antonio flores on August 16, 2013