History:
In July 2011 Merlin Media took over the station from Emmis Communications and dropped the rock/alternative format on WRXP. Artists formerly heard on the station include: Pearl Jam, Nirvana, The Red Hot Chili Peppers, Muse, Stone Temple Pilots, U2, Green Day, Kings Of Leon, Foo Fighters, Alice In Chains, David Bowie, Guns N' Roses, The Police, Cake, AC/DC, Smashing Pumpkins, Mumford & Sons, The Arcade Fire.
In July 2012 the station switched from News to Alternative music as "New Rock 101.9".
On November 2, 2012 CBS Radio took control of "New Rock 101.9" WRXP and began airing a simulcast of WFAN 660. Before the flip WRXP had huge ratings success as a top 10 station despite the fact of little to no promotions and advertising for the station.
With the merger of CBS Radio and Entercom completed on November 17, 2017, the station became part of the new combined company to go by the name Entercom. 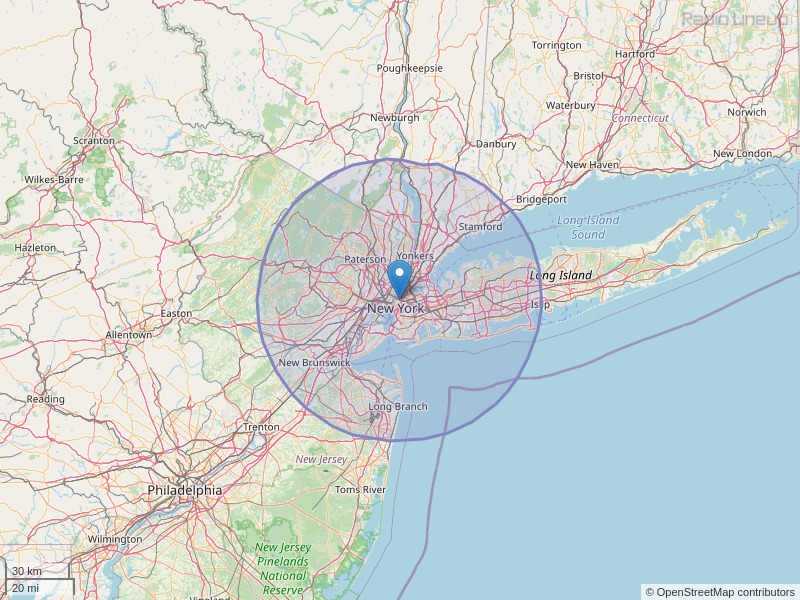 YOUR PROGRAMMING MOVE SUCKED!!!! BRING BACK RXP - THE ONLY STATION I AND EVERYONE I KNOW BOTHERED TO LISTEN TO. IT WAS THE SALVATION OF NY RADIO AND YOU DESTROYED IT WITH YOUR NEW (OLD, TIRED, PATHETIC) FORMAT, ALL THE SAME STUFF THAT CAN BE FOUND ALL OVER THE REST OF THE DIAL. YOU'VE MADE YOUR NEW STATION COMPLETELY INSIGNIFICANT. BRING BACK WHAT WE WANT TO HEAR! I IMPLORE YOU, BRING BACK RXP.
By: Maria - 42 year old consumer on August 4, 2011

I AGREE 100% WITH MARIA! WEMP SOUNDS WORSE THAN A COLLEGE RADION STATION & PLAYS REO SPEEDWAGON! PLEASE BRING BACK RXP WHICH WAS THE ONLY ORIGINAL COOL NY RADIO STATION WE HAD!
By: Eileen on August 10, 2011

Te new format is terrible! NYC finally got a station that played a variety of rock music, some old, and some new. The classic rock station in town ignored any new artists and had gotten boring along time ago. This new format is what? Talking about chocolate in the breaks? What is that? Jumping in with gossip, and traffic and filling in with bad 80's pop music. Who ever listened to Rick Springfield anyway!! Now I have to go out and get XM or something, because radio in NYC is the worst
By: Tony on August 11, 2011

1019 rxp was good , but the new station is good i enjoy the rock music from the 8o's and now but what i dont get is the chocolate commercial really yea that needs to go along with the other boring commercials and the weather and traffic every what fives mins and the unwanted news needs to go less news and weather more music and its nice that there is radio station that dont play nowadays crap
By: purple on August 14, 2011

New format is the worst kind of drivel. There is already too much of that stuff all over the air. New York should be a leader in alternative rock, but instead there are now no alternative stations. Nice move, Emmis.
By: Cam on August 16, 2011

Clearly this is a radio stunt. Do you reaaly think that New York really needs another news station? I keep tuning in to find out when the joke is over. It's really sad. There is nothing else on the radio other than 104.3 but how many times can you listed to Tom Petty?
By: Joe on August 16, 2011

They still play music in the background. They should grow up - it's either a news format or music format, but it should not be both.
By: Blue on September 8, 2011

I called your station to find out when Gene Michaels was on the air. Not only was I given the wrong information, but I was forced to listen to two "yentas" in the morning. I never listened to 101.9 before, but I'm sure it had to be better than this. I'm sorry Mr. Michaels left WCBS, he was the first traffic reporter with a personality. His reasons for leaving a WCBS, a class station are his own--maybe he was tired of traffic. I'll miss him. October 11, 2011
By: Deborah on October 11, 2011

The only reason why I would (and will) call this radio station is to tell them how much they suck. I pity the fool who has any money invested in this move. Who in their right mind could believe for one second that an all-news format would work? Not only that, 101.9 was a hellava good rock station.They mixed some headbangers with adult rock alternative and did it well. Can't wait to see it at the bottom of the arbitron ratings soon.
By: Steady Eddie on October 12, 2011

Please bring back 101.9 WRXP. Thank goodness it still lives on as an Internet radio station. FM is now dead to me.
By: Anonymous on October 18, 2011

I said it before, and I'll say it again - who decided we needed another an all talk/news station? Not to mention that the crap this station is pushing as talk is pathetic. Just because we never had a station on fm radio with this format, does not mean we needed one. My biggest fear is that other fm station owners may decide that it sounds like a good idea. New York should be a leader in alternative music; instead I have to stream my alt. music. How sad.
By: Cam on October 21, 2011

Tell your programmer to fix the display on the HD radio for the smooth jazz format on 101.9-2 - the artist and song is NOT being displayed. It only shows WEMP New York HD2
By: p jackson on November 25, 2011

I agree with the comment by p. jackson on 11/25/2011. You have still not fixed the display on the HD Radio for smooth jazz. People would like to know the name of the song they are listening to. That you have not fixed it, since someone wrote you back in November doesn't say much for the radio station.
By: anonymous on January 19, 2012

i don't understand anyone that signs a letter anonymous! how cowardly! we have a 1st amendment in our country, called freedom of speech, so long as it's honest and decent/not vulgar! i've offended a few loosers with my honesty, and truthfulness! the truth always offends a thin skined looser! anonymous hides a looser! stop hiding and show yourself! it gives your comments more value!
By: john matullo on February 2, 2012

I would like to hear pre-RXP format which was Smooth Jazz or at least change WEMP HD2 station to previous format - it had better jazz and there was "artis/title" info for every song played. As of now your HD2 has very poor jazz playlist that is riddled with 70's and 80's pop - It was way better before March 2011 and even better before RXP! Bring back the glory days, tnx!!!
By: JD yo on February 14, 2012

WRXP was good and was gaining ground, despite the fact that they only time they only promoted the station was before they actually had the format and the air staff figured out. Brilliant... buying billboards when they din't yet know what they were doing and who was on air. Then, WEMP as a follow up is a joke. They call it news, but it's just crap. Amateurish at best and they seemingly have little knowledge of what news is.
By: Joe Mama on February 29, 2012

Randy Michaels sucks and swallows as well as WEMP FM NEWS WE WANT ROCK BACK IN NYC Q104.3FM SUCKS BRING BACK NEW ROCK
By: Donald Jones on March 22, 2012

at least go country, n.y.c. needs a new country station! and country stations always where the most lucrative ones in n.y.c
By: john matullo on April 30, 2012

Your hd2 Smoothjazz has been of the air for at least 10 days Please don't tell me your taking my music away again. I purchesed an hd radio for one reason, and that was for Smoothjazz. New York needs a Jazz station. If u do return, please put back titles, and artist. Keeping fingers crossed.
By: E. Clemente on June 16, 2012

I am glad to see rock has returned to the New York City airwaves. It is amazing how in Los Angeles two alternative/rock stations, KROQ and 98.7, both do really well in the ratings but NYC didn't even have one. Hopefully the new WRXP will model itself after KROQ and 98.7 and be a great rock outlet.
By: John on July 19, 2012

I'am one of those people that bought an HD radio, for one reason, and one reason only SMOOTHJAZZ. Cool New Yorkers like me need the cool vibes. I see WEMP FM is playing rock again how many rock stations do we need. Surley the greatest city in the world needs a jazz station. Listeners are loyal, and true to the music, real music. They actually use real instrements, and the artist can read and write music. Come bring back the groove.
By: Rod Clemente on July 21, 2012

Why can't we get the name of all the songs you guys play? I hear a grand tune but it is the name of the song or the artist we need to know. There is one song in particular the stick line is "you just don't get it." Every time I hear I wait for the artis or the name but never "get it".
By: Pierre on August 25, 2012

WRXP is back and kicking ass. Ratings are way up on 101.9 over the previous news format. I hope they don't change formats again.
By: Jeff on October 4, 2012

And now alternative rock is gone again, thanks for stealing rock from New York City again CBS.
By: Rob on November 6, 2012

Where is my jazz your sports radio sucks balls
By: Anonymous on December 1, 2012

Well, we all saw this coming. Alt. rock is not as listener friendly as sports raido or classic rock. So, after the all female news friendly station (ha, ha!), the powers that be would resume the alt. rock station, so that when they finally sold the station they could have inflated ratings, and ask for more $$$. I am a litle bit stoned, so does that make sense, the way I stated it?
By: Cam on December 5, 2012

We need smoothjazz radio in NY. U told everyone to buy hd radio for 101.9 hd2 now nothing for at least two months. Now I have hd radio and nothing to listen to. XM satillite here I come, if I have to pay so be it. There's nothing on hd 1,2 or 3 that thounsands of people want to listen to. New York City without a jazz station its a sin. At one time u could get anything here.
By: Rod on December 8, 2012

Craig totally sucks! Every time I put the radio on he doesn't shut up!!! So far it feels like a movie review. Evan doesn't get a chance to speak. I listened every day and as long as Craig who is a moron I won't. Why should I be forced to listen to a dishonest convicted felon. I do believe in second chances but his arrogance make the show something that will make me take you off my cars memory and take it off at my shop at work. Evan is really good I listen to him on Saturdays. Get him a partner who people can respect and be able to listen to without all the whining.
By: Carlo on November 23, 2020

All the WFAN Sport's Radio 📻 66.0 AM pesonalities are great 👍 except Chris Moore I'm from Dover Delaware and The Smooze Steve Simmers needs to keep his new 7:00 PM until midnight shifts ! I have been a native listener since the early " 1990's" and all contests on WFAN should be available to any listeners areas not 👎 just in the New York New Jersey and Connecticut areas Thanks, Steven
By: Steven on April 16, 2021