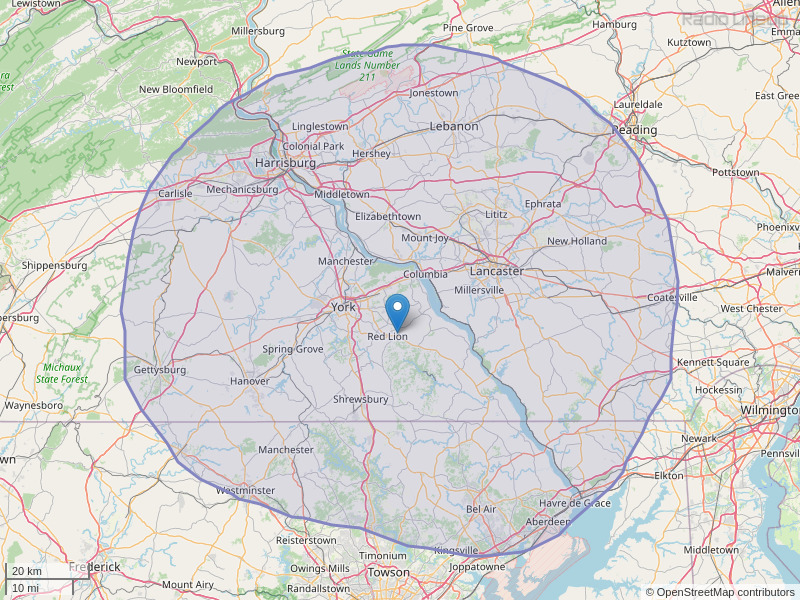 Who is the new morning guy on with Diane? Where is Dave?
By: Marian Deckman on May 8, 2013

Where is Dave from the morning show? Funny how he just disappeared!
By: Cindy on June 14, 2013

Looking forward to hearing the eagles game this Thursday night! Make sure the back up generator has enough gas...just in case :&gt;)
By: onemadscientist on September 18, 2013

I won last week on the radio I tried finding your address on Internet and the yellow pages Internet . I googled all kinds of way to find your address to pick up my 25$ gift certificate to roots auction and art show and couldn't find it . I tried calling the phone number that came up in my search and it rang picked up and said the number you dialed is not in service . Stopped at a few places in the redlion area and asked clerks if they knew where you were located and they didn't know. I was hoping to take my mother to this for I ws excited to win something for once on the radio but its not going to happen . I will still listen to your station for I love the songs that you play and hope that next time if I win I can get your address so I know where to pick up my prize. Sincerely Patricia L Myers 519 East Market Street Marietta Pa 17547
By: Pat Myers on August 28, 2014

Subject: Community Affairs PAGE 1 QUESTIONS: 1. Select Recipient: Community Affairs 2. Name Jesse Reed 3-a. Email Address wizard13@zoominternet.net 4. Message: I am the District 9 Rep for the 8 Chapters of Abate of PA and a member of the Lancaster Chapter. We will be holding out 2nd annual Ride to Thrive to benefit a Lancaster resident who was severely injured while riding as a passenger on a motorcycle . The Lady is in very bad condition and has an infant child who must be cared for by relatives and it is our hope that what ever we can collect in donations will help this lady and or her child in some way. We have a flyer available and are asking WGAL 8 for help in getting the word out to all the area motorcyclist so this event can be a success . Any help in promoting this event will be greatly appreciated and we invite you to send someone to cover the run on Saturday October 17, 2015 with registration at 10:00 am and Kickstands up at 11:00 am leaving from the Brasserie , 1679 Lincoln Hwy E, Lancaster, PA 17602 (717) 299-1694 and returning to the for lunch and prize awards . Thank you Jesse Reed A.B.A.T.E. of PA District 9 Rep ( Chester, Lancaster, Lehigh Vally, Delaware Vally,Lancaster,Liberty Riders, Montgomery,South Mountain, and Philadelphia County's) I am also Sergent at Arms and Public Relations officer for Abate of Lancaster 443-553-4549 Abate of Lancaster Meets the 3rd Thursday of every month at The Brasserie at 7:00 pm our next scheduled meeting will be on Thursday September 17, 2015 at 7:00pm Feel free to have someone on your staff stop out and visit us.
By: Jesse Reed on September 21, 2015

Hello! I talked with Santa and his helper this morning, I also took a few photos of which are posted on the "Columbia Spy" website. Thanks for taking on this project and good luck. Best wishes in the new year, Sincerely, Sharon
By: Sharon on December 7, 2015

I want to donate school supplies today at the Ephrata Walmart WSOX event but I would like to know what kinds of supplies are most needed. Please repond
By: Joe on August 19, 2017

I am a parent of a senior in Red Lion School District. A group of parents are attempting to set up a graduation parade for the students since they can’t have their traditional graduation. We are looking for a radio station who would be willing to play a graduation playlist for the grads for about an hour during the parade. Would this be something your station would be able and willing to do.
By: Donna Doyle on May 1, 2020