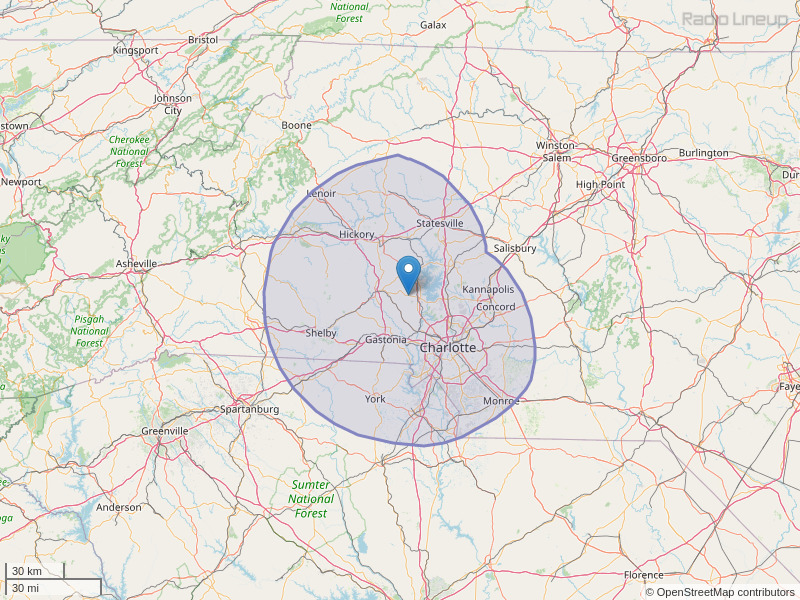 Hey there. Our best friends live at Lake Norman. When we're there we love listening to The Ride. We live in Oklahoma City and would love to listen to your station here. I am a member of I Heart Radio but don't see your station listed. Is there an app where I can get your station? Thanks for the great tunes!
By: Stan Shore on April 19, 2014

I love this station but the signal has been fading out the last few weeks. Another station will start playing and then it will go back to 95.7. This is in my car, any thoughts?
By: Susan Lawrence on April 21, 2014

Hey Toney Scott play the Original Buffalo Springfield For What It's Worth. Not what version your played Wed night.
By: Connie Mack on October 29, 2015

Please stop playing Bruce Springsteen. He is an unamerican ungrateful jerk who claims to be embarrassed by America
By: Lynn Slaytin on February 6, 2017

Put the dial to 95.7, turn it up, and snap off the dial. This is the only station you need in the area. The music is great and the hosts have compelling voices and know their stuff. I dropped Satellite Radio because with 95.7, who needs anything else? (One small complaint. I know we're in Basketball country but .... kill the sports and rock on gentlemen (and ladies).)
By: Joe Radio on February 9, 2017

I live up here in the NW corner of NC. LOVE your radio station where I tune in with an old 1970 stereo receiver I rebuilt and a 6 element beam antenna. At near 70 years old, I still rock and roll at high volume! Keep on Trucking!
By: art on March 22, 2017

I spent last week on Lake Norman (from Ohio). Weather was great, company was good and music was awesome. Hopefully I can get app and listen to it daily back in Ohio.
By: Chuck Black on July 4, 2017

Love your format! Particularly playing the demos for some of the great songs we listen to. Heard "Roundabout " by "Yes" and James Taylor doing Carole Kings "You've got a friend" the other day. Great! As an old Rock and Roller from Scotland, back up band to the Moody Blues, Hollies, Bo Diddley in London and very influenced by The Beatles, I love your style. How do I get one of my own songs played? Ed Hamill
By: Ed Hamill on August 6, 2017

To Tony Scott Tony When I'm in the Charlotte NC area I listen to you could you do me a favor. and see, When Nick on the Accoustic storm is going to play the Accoustic version of Small Town by John Mellencamp shoot me a email or you can call me at 336 880 3858 and let me,know I also have a major interest in wanting to get into radio need a career change badly thanks and keep up the good work
By: steven brennon on September 12, 2018

I was listening to the ride today and heard a song that I thought was called freedom but I can't find it anywhere can someone possibly tell me the name or artist it was a great rock and roll song thanks...love the ride grew up with the music
By: Dewey on December 18, 2018

Send an email to me at the above address as I wrote previously for three Nobel Prizes since having been cured of Alzheimer's and have yet to contend but might have information of interest to your station and it's happy future. Thanks.
By: Minc Married in Christ Bumgarner on January 10, 2019

Hello there Kimber and Tony l listen to you all the time. For years. Thanks for keeping the old time rock alive. I do wish they would Let you play more variety of the old rock roll. Seems like you play More variety on weekends.but thanks for all the info and good old rock Roll. Denis.
By: Denniswhittington on August 23, 2019

We do MIDWAY WICKED WOODS in Statesville very interested in advertising with you my cell 704 902 1786 if someone could contact me THANKS
By: Randy Jenkins on September 4, 2019

Hey Tony Scott. Please stay on your Lane. And do Not stray from Music talk. ONLY. Do Not desire to hear ANY talk about Stephen Colbert. And politics involving anybody. Including President Trump. Certainly. Not the time. Or place. Rock. Music ONLY. Not talk SHOW. Etc. THANKS. A very Loyal Listener. Who 3expects. Music Relating thoughts only. .
By: C oach B. E. C. on February 17, 2020

Hey Tony enjoy rockin out with you in the afternoons have a request for you would like to hear Sister Golden Hair by America also I listen to you between 3 30 pm and 4 30 pm Monday thu Friday keep up the good work and will keep rockin out with you take care and you are appreciated here in High Point NC.
By: Steven Brennon on April 30, 2020

Hey Tony Happy BIRTHDAY TO YOU MAY YOU have many more it is sad that you cant go out to celebrate your birthday but from me and my brother Pat we still hope it is the best birthday for you keep rockin take care.from your friends here in High Point NC Steven and Pat.
By: Steven Brennon on May 5, 2020

HEY TONY SCOTT , just to say you are my favorite D J , i listen to you on 95.7 the ride CHARLOTTE N C you are jamming in LINCOLNTON NC .man you are one BAD DJ i can't wait until 3 ;00 for you to come on ,you play the best music ever keep ROCKIN the music TONY love youDUDE
By: rita hamrick on June 2, 2020

Would you be able to play coyote by joni mitchell once in a while?
By: Richard Murtaugh on October 4, 2020

I'm curious to know I've been trucking for 30 years I run through Charlotte a lot and I hear Tony all the time. however I was rolling across central Illinois making my way from Davenport to Indianapolis when I got around Champaign towards Danville Illinois. I heard Tony again on 94.9 K-Rock..I wonder how does that happen does he not on the drive or can you do double duty somehow but not be at the actual station I was just curious..
By: Kevin Duzinski on November 3, 2020

Is there anybody out there secretly hiding a recording of the voice of the late great 1970's FM deejay, (WRNA/WROQ) Calvin Walker?! Please share!
By: Gina S on December 31, 2020

I have been listening to the ride since day 1. I have since moved to southern indiana and I still listen by using the rides app on my phone. I hope this station never ends. I listen in my van, at work as well as at home. Best radio station ever
By: J.L. Kendall on April 20, 2021

Tony- I have been listening since the beginning. Back then I would lose you in the Mallard Creek valley on Harris Blvd. As a Woodstock era hippy from just north of NYC, I can testify that you and the team being the genuine articles. Being fully retired nowadays, I can just walk out of the wood shop and come back when the games are over. Otherwise it is 95.7 all the time. One sad comment though, as my contemporaries are passing on you music seems to be creeping slowly forward in time. Inevitable I guess, it is really hard to find big band music on the radio these days. Keep on rocking. I am the guy in the blue Beetle.
By: Tony L C. on May 17, 2021

I never turn the radio in my bedroom off. It's true. Between approximately 2:00 am and 6:am some really weird junk shows up. I sure hate to think your station cant do better on the play list. The Doors this morning gave me nightmares! I turn to two other stations more and more. you can't please everyone but there's thousands of classic rock songs being ignored. i have a lot more for you but I have to stop for now.
By: jimmi on July 22, 2021

Your Englishman morning dj plays about 4 uk songs to 1 us song. Know he loves them but we started rock and roll.
By: Rodger on October 18, 2021

The other day Kimber gave a brief history of the Moody Blues “Forever Autumn” and then played the song. It gave you chills!
By: Glenn on July 18, 2022