KLDV is an FM non-commercial radio station broadcasting at 91.1 MHz. The station is licensed to Morrison, CO and is part of the Denver-Boulder, CO radio market. The station broadcasts Christian Contemporary music programming and goes by the name "K-Love" on the air. KLDV is owned by Educational Media Foundation. 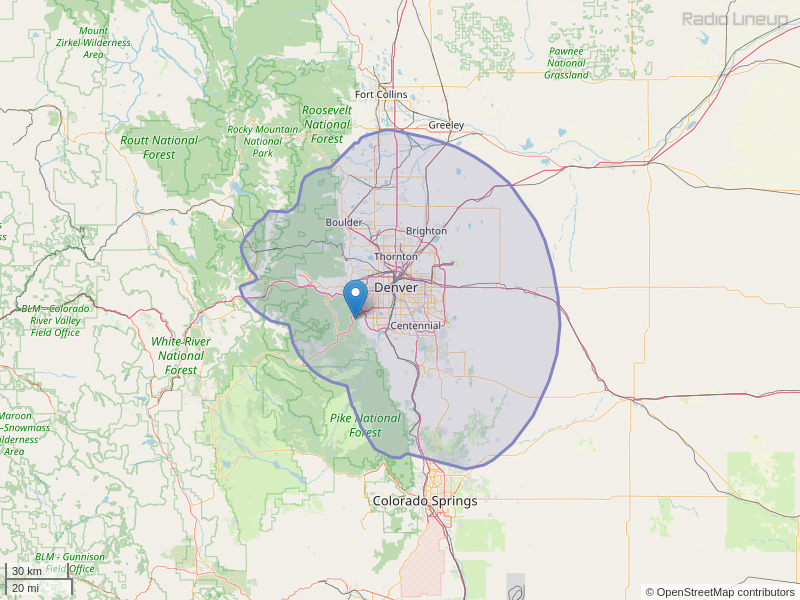 Our family really enjoys listening to your music. I love the fact that you make a mission that your music is safe for All Children's ears to hear. However, it is very frustrating that the news topics you cover are not always safe for children's ears. There are some things that take place in the world, such as school shootings, that I would prefer my younger children to not know about yet. We, as parents, at least have the right to choose when we introduce these topics to our children and it's very frustrating that they hear about them from a Christian radio station before we even get a chance to talk to them about it. We used to live in the St Louis area and Joy FM was particularly in-tune with making any major scary news events very vague. They would simply state that "there has been something tragic happened in Florida and we are praying for all of the people affected". They would not go into details which would in turn lead to our children's innocence taken away. Can you please consider maybe following this lead of being more vague with the scary details? Please. It's becoming harder and harder to feel like we can listen to your radio station because of this. Sincerely, Liz Rakers
By: Liz Rakers on February 15, 2018

Your relay station at 88.9 Plainville is interferring with 88.9 fm in my area(LYONS) the last week. What is going on to cause this unwanted interference?
By: Jack Brannon on June 4, 2018

*Reply to Jack Brannon* Neither KRFC or K205FV "serves" Lyons on purpose, however both of their fringe signals intersect in Lyons. Tropo can be used to explain why one station is overpowering the other; local conditions tend to allow Denver stations to go somewhat farther than normal, and be stronger. Here in Wyoming, I have received K205FV over the top of KRFC often. If you are more of a KRFC fan, than it's good news that they have a construction permit to deliver a city-grade signal to the Lyons area. Hope this helps, ZBG.
By: ZBG on February 18, 2021

I have contact K Love twice and received no response. I hope you aren't all about fund raising and not about ministry. I live 50 miles from your broadcast location in Morrison, CO. I can't get a decent signal yet 91.1 out of Alliance, NE which is a NPR station comes in fine. Sorry hard to support you if you can't effectively broadcast 50 miles, yet NPR can broadcast 350 miles.
By: Ronald on July 22, 2021

Ronald, Are you in the Northern Colorado area? I'm up in Wyoming, where KTNE and KLDV battle each other all the time LOL. I hear none of the Denver stations make it to Colorado Springs, though, so if KLDV is out, check on KCFR and KTCL to be sure. By the way, there was a record Tropo opening to Nebraska on the 20th where Panhandle stations traveled to Colorado, Wyoming and Kansas. From ZBG
By: ZBG on July 24, 2021