The K-Love For Christian music

KKLQ is an FM radio station broadcasting at 100.3 MHz. The station is licensed to Los Angeles, CA and is part of that radio market. The station broadcasts Christian Contemporary music programming and goes by the name "100.3 K-Love" on the air with the slogan "The K-Love For Christian music". KKLQ is owned by Educational Media Foundation.

History:
As part of the merge agreement between CBS Radio and Entercom they were required to sell KKLQ (then KSWD) to meet the ownership limits. Educational Media Foundation buys the station along with two others in San Diego and Wilkes-Barre for $57.75 million.
November 16, 2017: Classic rock KSWD The Sound signs off and Educational Media Foundation launches its K-Love format for the first time in Los Angeles. The most played artists as The Sound were: The Beatles, The Rolling Stones, Led Zeppelin, The Who, The Eagles, Aerosmith, Van Halen, Pink Floyd, Elton John, Creedence Clearwater Revival, Tom Petty & The Heartbreakers, The Steve Miller Band, The Police, Boston, Steely Dan, U2, Eric Clapton, Foreigner, The Doobie Brothers, Bad Company. 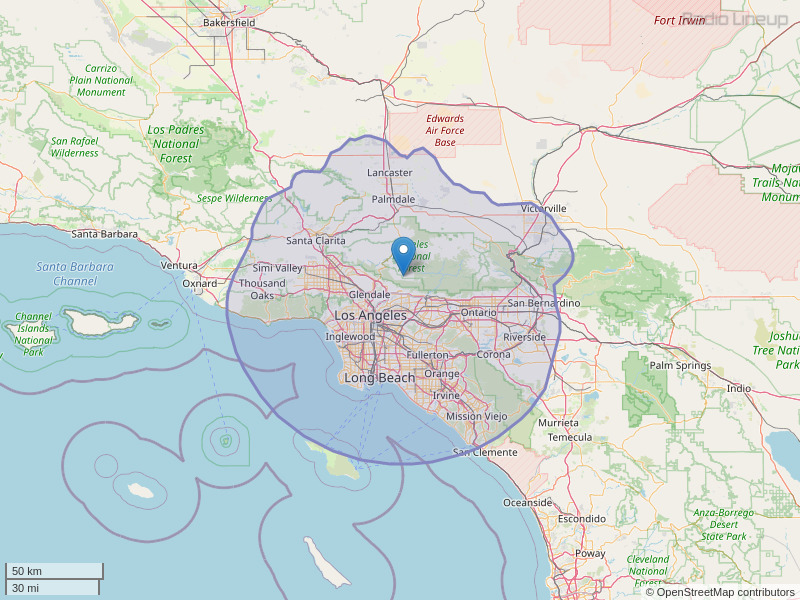 Rest in peace The Sound. Educational Media Foundation kills another station.
By: JJ on November 16, 2017

Dear Lord, would You be my Valentine? You have probably been asked so many times before, but Lord, would you please be my Valentine? With all of the worries and fears we all have, I need to know that it is Your Heart that truly loves mine Oh no, I'm not lonely, I have a beautiful family and caring friends..and for most that might be just fine But Lord, the Love that You have shown me for all of my days, is the sweetest fruit of any on the vine You know how I know this Lord? You have said You will always be there, whenever I sense a need To bow and to pray on bended knee, to seek Your Word, to ask for mercy or forgiveness for a deed Or to ask for Your guidance and direction when I have surely lost my way.. a warning I should heed Maybe it's just to comfort myself, knowing there are many scriptures to soothe my soul that I can read I've known all my life that You will be present whenever I gather with others to call out your name You have been ever-faithful, merciful, gracious and kind...you have taught humbleness over fame You have demonstrated Your power, provided Your wisdom, nurtured with care, enabled the lame Placed empathy in our being, generosity in our giving, encouragement in our words, now it's my aim To share all that you have given through blessings beyond measure, to let others know of Your love Encourage those who have lost their way, pass them the same support that You provide from above Be humble servants of Your Will, beacons of Your Loving Light, bring Peace on the wings of a dove Bring Hope to a world greatly in need of Your Grace, a place where people need not push or shove In order to move forward on agendas that harbor stress or fear, we know that's not what You seek Your vision entails a harmony in spirit, a mending of brokenness, a rise from the valley to the peak Conquering of fear, hatred and mistrust, paths to new freedoms, now honor is shown to the meek No longer will those who stand up for injustice be shouted down rudely and be made to feel weak Lord, I give you my love, my soul, I yearn for You alone-each moment I'm awake, every step I take Let my morning words be of worship and praise, being so grateful for every movement I can make For every bird that sings, every blessing you bring, for every smile I see, or laugh I hear, a leaf I rake Every plant that thrives, all of my family's lives, the bees and their hives, crashing waves or quiet lake I bring all glory and honor to Your Name for all that You do, and now I want to give my heart to You I need to know that you understand how I feel, for there are so many blessings from all that You do I go through the days with so many concerns, yet I make sure to take the time to appreciate a few Of the blessings I hope to never take for granted, Your Love for me is what makes all things a new So Lord, once again, I give You my heart and my soul-there is no place that I would much rather be You have given me life, given me hope, given me peace through Your loving grace-you paid my fee You took away all my sins and pain and wiped the slate completely clean-you made it so easy to see That all I ever needed was Your Love- now we need not feel locked up, for with You we have the key
By: Robert Jones on February 16, 2019

I’ve posted this information in Washington DC, Seattle and Spokane Washington, Denver, Boulder and Pueblo Colorado and Sacramento, San Francisco and San Jose California. I also sent this information to almost all the radio stations in Portland Oregon and Seattle Washington including KISW On Wednesday May 15th, 2019 hackers locked me out of all my email accounts and prevented me from opening any new ones. I had been sending emails to Radio stations in Southern California the day before. Two days prior to that on Monday May 13th, The Family had gotten its hands on my thumb drive which contained copies of all the files I was using to inform people about the situation between The Family and I. I had backups in my email accounts but once they locked me out of my email accounts I no longer had access to these files. There were a few things I was informing the Radio stations about. One of them that Radio 1190 had a moral obligation to cover the murder of Randy Rhoads. Radio 1190 is the Colorado University Radio and the murder of Randy Rhoads was tied to an Ozzy Osbourne performance in 1982 that was held at the Colorado University Event’s Center located in Boulder, Colorado. I’d informed Radio 1190 of that situation and its connection to The Family regarding The Family’s guilt of treason and the creation and distribution of Aids around August of 2018 and they failed to report it. I was also informing them of a situation that happened in 1992 that was connected to the Wilson sisters of the band Heart that got my bandmates and bandmates of two other bands murdered. This involved the secretary of Bad Animal studio named Becky who was also murdered over the situation. Bad Animal studio is owned by the Wilson sisters. I also had information about KISW involved in a situation where The Family was trying to get me over the Canadian border in 1994 so they could lock me up outside the country to neutralize me as a result of my HIV activism that I was involved in in Seattle from 1990 to 1994. KISW is located in Seattle. One of their employees named Diana who worked in the advertising department got me Pink Floyd tickets to the concert in Toronto. She was murdered over the situation and many others as well so KISW also had a moral as well as a legal duty to cover the story. They’d been informed and failed to cover it. Now there is only one reason The Family would steal, thumb drive and close my email accounts and prevent me from opening new ones. That is that everything I’ve been saying is the truth. There is no other reason to take these actions. The information I was sending out is tied to the creation and distribution of HIV by The Family. They are trying to keep the public from finding the information I’ve been sending out because then everyone finds out they made HIV. The actions are equivalent to legal admission of the information and ultimately the courts will view it as such. What they really don’t want people finding out is the fact that the HIV pandemic was intentionally started though tainted vaccines produced by Merck whose website is at https://www.merck.com/index.html And the National Institute of Health whose website is at https://www.nih.gov The National Institute of Health is a Federal Government Program which means that this situation is evidence of the US Government’s involvement in starting the HIV pandemic. What a lot of people don’t know is that there is an HIV vaccine that has been discovered by OHSU. I found out about it around 2007 at about the time The Family intentionally infected me with Aids. The FDA has failed to approve the vaccine up till now. The Family actually has the power to stop the HIV pandemic and has failed to do so. I contact sent emails and left voice messages to the FDA a few years ago so they know this is an issue and they have still failed to do anything about it. People are dying around the world to HIV needlessly. For information on the technology used for the vaccine go to https://news.ohsu.edu/2017/01/25/vaccine-technology-developed-by-ohsu-scientists-acquired-by-industry-leaders There’s more information about HIV on the blog but I will say this. The United Nations was involved in administering the tainted vaccines through there organization called the World Health Organization. Their websites are at https://www.un.org/en/ https://www.who.int I contacted the White House about The Family closing my email accounts and preventing me from opening new ones on the day that it happened. President Trump hasn’t done anything to restore access to my email accounts. I’m not surprised because clearly the US Government was involved in the distribution of HIV and are still involved in the ongoing genocide happening due to the inaction of the FDA. This is something we should all be concerned about. Not only is HIV a serious health issue for society at large but is in fact an act of war committed by The Family against the entire world. No wonder The Family stole my thumb drive, closed my email accounts and won’t let me open any new ones. If you care to share your feelings with President Trump about this situation go to https://www.whitehouse.gov/contact/
By: Paul Huebel on May 18, 2019

I have a song request. Heal Me by Jaime Masetta - released yesterday. Thank you
By: Jo-Ann Grossman on February 6, 2020

I LOVED THIS STATION WHEN IT WAS CALLED PIRATE RADIO , SCOTT SHANNON
By: Stephen Farrell on May 1, 2020

Hello, my name is Steve West, U.S. Army Retired, and COO/Executive Director of a Veteran 501c3 nonprofit organization, United Wings of Liberty (https://uwol.org), which helps Veterans receive a wide-range of service in order to rebuild their lives after serving. I was hoping, if possible Special Forces retired and UWOL President SFC Joseph Lowrey could have a segment to tell his amazing story, discuss our mission, and inform the public about our Virtual Fun Run fundraiser event we are hosting https://lnkd.in/g3u3RW7, this month. SFC Joseph Lowrey’s inspirational videos; https://uwol.org/testimonials Thank you, Steve West UWOL Executive Director / Co-Founder 501 (c)(3) FEIN: 84-4114229 U.S. Army (Retired) https://uwol.org 830-202-4786
By: Steve West on October 13, 2020

I loved that prayer for work you said today, about work. I couldn’t find it on your app. I wanted to repeat that prayer daily for my job if you could let me know exactly what it said I’d really appreciate it! Thank you so much for the Godly uplifting prayerful songs, so helpful!
By: Nancy on April 28, 2021

I am visiting So Cal this Sept 2021 from DFW where I always listen to KCBI. I had wondered where the awesome host, Lorie, went to from KCBI. It was such a joy to hear her today at her new radio home here, KKLQ! Take good care of our girl!
By: Beth on September 15, 2021